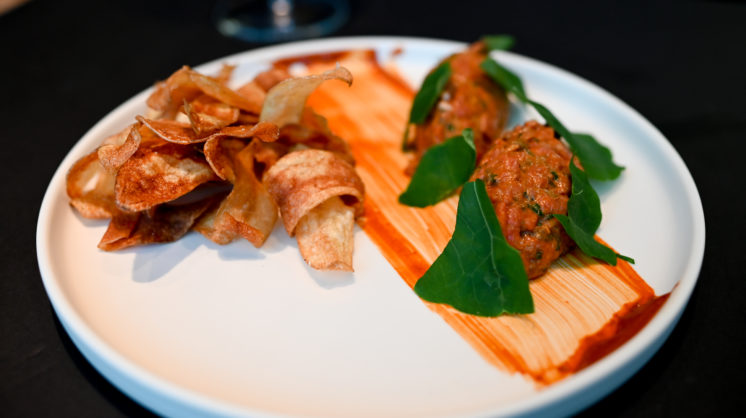 Spring in the 405 is bringing a spate of new restaurants, and restaurants with new offerings. Hospitality is still trying to adjust to post-pandemic operations, including staff shortages, price volatility and sporadic availability of products from produce to spirits. While the expectation is for more counter-service models, development of full-service concepts is showing no signs of slowing.

Culprits. Bricktown’s only full-service hotel — a Renaissance property — will include a Provision Concepts restaurant when it opens. Culprits is the latest project from Provision founder Jeff Dixon, and the company made a splash earlier this year when it announced James Beard-nominated chef James Fox (Scottsdale, Arizona) would be partnering in the restaurant.

“We asked him to create 22 dishes, and my culinary director and I will fill in the gaps around those items,” Dixon said. “We’re a hotel restaurant, so we’re offering breakfast, lunch and dinner. As of now, we’re planning a 6 a.m. to 4 p.m. menu, and then a dinner menu to follow.”

Fox will be in OKC twice a year to refresh the menu, which is best described as small plate-driven, with a very eclectic focus: chop house, Southwest, Asian influence, etc. Dixon said the likely open date for Culprits is the beginning of June.

Eatery and Cocktail Office at The Union. The casual, comfort food concept from Killer Squid Hospitality will launch its Airstream bar on the patio for Cinco de Mayo. Operating partner J. Mays said the Airstream is equipped with two taps and a full bar with wine and cocktails. Guests will be able to order food counter-service from the bartender.

Union will also begin brunch service May 15. Mays said the menu is still in development, but comfort food with light, healthy options is the most likely. Mimosas will definitely be part of the brunch menu, as well as craft cocktails and local beers, including a Vanessa House rotator tap.

Empire Slice House – Edmond. Rachel Cope and 84 Hospitality’s newest Empire will be adjacent to the Edmond Railyard. The full-service pizza joint is 4,700 square feet, making it a thousand square feet larger than the Plaza District location. Cope said the new location will have the same menu as Plaza District and Tulsa, with a slight change for local beers.

“We like to feature local beers close to each location, so we’ll be talking to breweries in and around Edmond,” Cope said.

The space was an old furniture store, and the landlord intended to make two spaces of it, but Cope wanted the whole space. The kitchen, including prep areas and walk-ins, is comfortably large, and the expansive dining space compensates for the lack of a patio – a feature at the other two locations, but one Cope said she won’t miss in Edmond. “Honestly, I’m just glad I don’t have to build and manage another patio,” she said.

Staffing will need to be about 70 strong to handle the size of the space, so Cope is uncertain of the actual open date, but expects late May or early June.

Milo at The Ellison Hotel. All the cleaning and de-smoking are done from the massive fire in the apartments adjacent to The Ellison, so Milo reopens May 2 with a larger, more diverse menu. Chef Josh Valentine removed roughly 30 percent of the original menu, and then added 60 percent more items.

Food and Beverage Director Michael O’Hara said the new menu is based on Oklahoma cuisine that Valentine grew up eating. “That means Southwest and Tex-Mex, of course, but he’s also added some Vietnamese-inspired dishes like a roast chicken with pho broth, and we’ll have bao buns on the pool deck.”

The pool bar opens May 5, and the menu is more snack-centric. “It’s stuff you can hold in your hand and a few other items,” O’Hara said. “Chef has made a Sonoran dog, sopes, ceviche and other items that work in a poolside setting. We’ll also have wine, canned cocktails, frozen cocktails and a good selection of beer, cider and seltzer.”

The bar menu at Milo has been overhauled as well, with roughly half the drinks coming off to make room for new ones. O’Hara said the focus of Milo’s menus would be heavily seasonal, so expect regular changes in flavors, dishes and ingredients.

Sedalia’s. This looks to be a unique concept for OKC from the creative minds of Zak and Silvana Walters — he’s the chef; she’s a front-of-house genius. Chef Waters has been overseeing the Jones Assembly kitchen for a couple years, and he’ll continue to work there while Sedalia’s expands. The menu is focused on seafood — especially oysters and shellfish — with some Bolivian influences from Silvana’s home country.

“We’ll have beef heart skewers to start,” Zak Walters said. “I got the yakitori grill this week, and it has a smokestack in the back, so I can do skewers in the front, and smoke oysters in the back. We’ll serve oysters raw as well.”

The couple is going all in on natural wines, too, with a list that is almost exclusively white and sparkling natural wines. Local beers are also on the list, as is a house-made tonic to accompany a nice list of gin and mezcal. The concept is small, with seating for 10 inside and 20 on the patio. Zak Walters said he expects a weekend service by Memorial Day weekend, and it’ll add service days as it’s able after the first couple weeks.