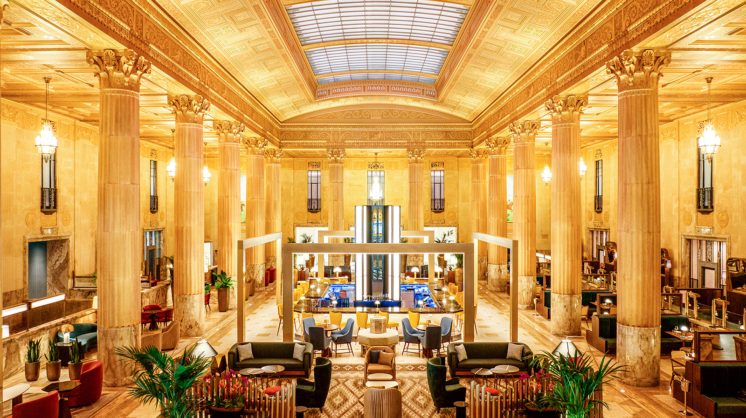 For the past seven years, the historic First National Center, located at Robinson and Park in downtown Oklahoma City, has undergone an over $275 million renovation led by partner* Gary Brooks along with owner and developer Charlie Nicholas. Built in 1931 as the First National Bank building, this iconic 32-story skyscraper was graced with murals, painted ceilings, decorative metal finishes, near century-old marble floors and columns and cast metal art deco touches. Over the decades, its elegant appearance deteriorated, and multiple attempts to purchase and revive the building fell through.

In 2015, the building went into receivership and a federal judge gave it clean title, so it was waiting again for a qualified buyer. Brooks, whose previous development projects include the Edge at Midtown, was working in the office building across the street from First National Center at the time. “In September of 2015, I walked in and had a vision,” he said. “The building needed to be saved, probably by a local, someone with a rallying voice. But I knew I was going to need a lot of help. There aren’t any buildings like First National.”

Considering the leadership in the state and city at the time, along with the team he felt he could assemble and the building’s clean title, Brooks believed it was the opportune moment. “If you were ever going to redevelop it, that was the time,” he said.

Renovating the nearly century-old building came with many difficulties, such as finding subcontractors willing to tackle the massive project and fund- ing it during the pandemic. “It was a big challenge when every hotel in the country shut down, and we’re trying to finance a big one,” Brooks said. The team spent three years clearing millions of pounds of debris from the tower so it could begin construction. Brooks credits the hundreds of people working on the renovation for devising creative solutions to the “largest redevelopment in the history of the state.” Mayor David Holt, in his 2022 State of the City speech, said First National was no longer “a missing piece” of OKC’s downtown resurgence.

First National Center now holds 146 lavish hotel rooms alongside new apartment homes and features several restaurants and bars — including one inside the bank’s original vault, The Library of Distilled Spirits. Brooks said, “That’s a unique experience, to be able to have a drink or eat dinner inside a restored bank vault. I cast the vision, and the team created something better than what I had dreamed.”

Brooks mentions there is a table in the Great Hall where he sometimes sits to watch the wonder on people’s faces as they walk among its columns for the first time. Calling the Great Hall “Oklahoma’s living room,” he said, “I want people to be able to enjoy First National that way; just for them to come in and sit down. I want it to be a place where Oklahomans can come and dream and say, ‘I know Brooks, he’s not that good. If he can pull this off, what else can we do?’”

After standing nearly a century, and after seven years of renovation, this architectural treasure, Brooks reminds us, is the city’s building. It always has been, it always will be.

*Correction: A previous version of this article misstated Brook’s title.