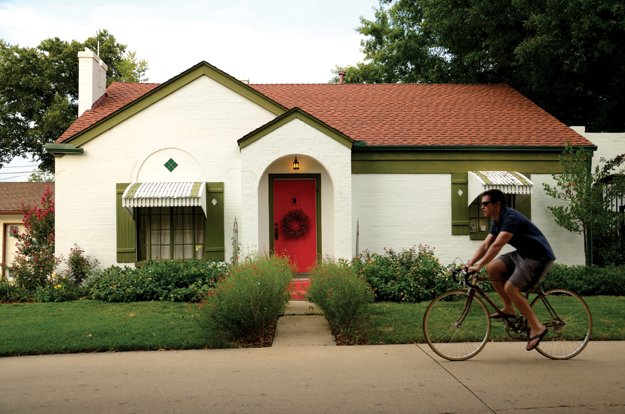 Strolling down the quiet, narrow lane of Carey Place on a perfect fall morning, there are no cars passing. The architecture and layout of this neighborhood remains perfectly preserved due to the diligence of its residents, and this cool, cloudless Saturday could just as easily be 1937…

It’s hard to imagine that this quaint, 75-year-old neighborhood, located on a triple block of the former private drive running from N.W. 18th to N.W. 21st Streets, is actually the creative solution for the abandoned plan to build an interurban commuter rail line branching out three miles northwest from downtown Oklahoma City. Today, as they have for decades, bicyclists make their way through Carey Place every Saturday morning. Sundays are perfect for leisurely drives through the neighborhood. And every day is ideal for local residents and their pets to take a stroll down the quiet lane.

The Carey Place Historic District is included on the National Register of Historic Places for its architectural significance as an outstanding example of 1930s masonry veneer houses, and of Mission/Spanish Colonial Revival style. Carey Place homes most closely fit a simplified version of Spanish Eclectic-style architecture, with variations including the red tile roofs and brick or stone walls painted white. This design gained popularity after the 1915 Panama-California Exposition in San Diego. Jess A. Woolf, who was a sales representative for Callaway, Carey and Foster, Inc. (developer of Carey Place in the early ’30s), had visited southern California and was impressed with the style.

Woolf responded brilliantly during the aesthetic shift due to the economy of the Great Depression, as the exuberant architectural styles of the 1920s Craftsman, high-styled Tudor Revival and Colonial Revival slowly began to give way to industrialized suburban developments. Woolf, who built his own home at 1901 Carey Place in 1937, is known to have built on at least 12 other properties on the street, for a total of 18 buildings. The design concept for Woolf’s homes was called “California Moderne,” demonstrating Spanish influences, and was more like homes being built in Los Angeles at that time. Every house Woolf built had a white picket fence and one of a vast variety of pine trees.

Woolf lived on Carey Place from its inception until the 1980s when he retired and moved away. He used the traditional sign of his trade on his home’s shutters, earning the much-maligned moniker, “‘Hatchet House’ of ‘Scarey Place,’” according to Jason Johnston, who has lived on Carey Place with his wife Edwina for nearly 40 years.

“We are the core of Oklahoma City’s urban legends,” Johnston says.

Although the hatchets carved out of the window shutters may have originally been meant to be decorative, local lore suggests a horrifically different account, which has earned Carey Place a page in paranormal guidebooks, tours and websites. One chronicle perpetuated by the paranormal community claims the hatchets on the house represent the murder weapon used to butcher a little girl from Carey Place who attended Gatewood School. Variations on the story agree that she was murdered on the front porch and may be buried in one of the yards. The same legend claims that a single swing may be seen rocking on occasion on the playground at Gatewood School. Some people speculate that might be the spirit of the little girl still playing down the block from her eternal home.

The Hatchet House is just one of numerous tall tales attributed to Carey Place, which makes the street a magnet for nearly 2,500 trick-or-treaters every Halloween. Each year, residents welcome ghosts, goblins, witches and other Halloween revelers – both real and imagined. The neighborhood association, which meets monthly in the Plaza District, has even arranged for police security to stage at either end of the street to ensure the safety of the families and children enjoying the decorated houses and haunted yards the residents roll out for the holiday.

“I personally have stories to tell about Ruth Stack Carey, the street’s namesake, and the only other woman to live in our home at 2000 Carey Place,” Johnston says. “I believe Ruth ‘lived’ with us for a while after we moved here in 1974.” It wasn’t until Johnston removed a large French mirror from Ruth’s boudoir that the incidents of her presence stopped.

David and Rosanna Tran Allen, newlyweds who are both dentists, recently moved into the “Bullet House” at 2100 Carey Place. An allegedly unfixable bullet hole is featured in one of the front window panes. “I was told that a man who once lived here caught his wife having an affair and shot a bullet through the window,” Allen explains (another anecdote suggests that a gangster was shot and killed while sitting in his living room at the residence). “The bullet hole in the window pane is said to return no matter how many times it’s replaced. If you replace the window it will crack again on its own.”

Despite the debatable history of the house, the Allens have observed that the neighborhood seems excited to have young people moving in to increase diversity. “There are longtime residents who have lived here for decades, but recently other young families like us have been moving in and introducing babies to the neighborhood,” Allen says.

Like Rosanna Allen, Lindsay Wright, another Carey Place resident, attended Classen School of Advanced Studies, which is located just a few blocks east of the neighborhood. “I always loved this neighborhood and admired it as I drove by to and from school,” Wright says. “But I never imagined I would have a chance to live here until my mom drove me over here as I was looking for a place to live after graduating from college. When we found this apartment I was so surprised. The neighbors are so careful to watch out for my roommate and me. We are two of the youngest residents here and they treat us like family.”

Wright’s roommate Blair Goforth, a Chickasaw photographer, was drawn to the distinct aesthetics of the Spanish-influenced architecture. “Every month the Plaza District hosts its 2nd Friday event [LIVE on the Plaza], which brings a lot of people and energy to the neighborhood,” Goforth says. “It’s inspiring for me as an emerging photographer to be so close to an arts district like the Plaza.”

Both roommates say that what they enjoy most about Carey Place is the pride the neighbors take in their homes. “You can see and feel people’s genuine love for the neighborhood,” Wright says.