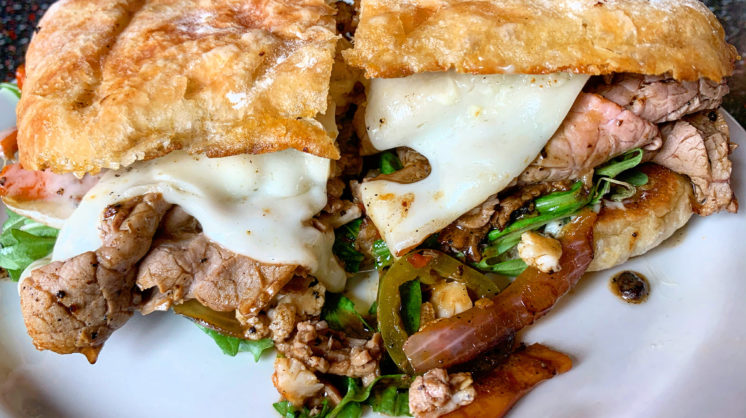 Chef Patrick Morris and Kristen Brice launched the food truck Amici in Movimento two years ago September with what he calls “the sandwich that started it all,” the Manzo Caldo (more on that below). That sandwich, and so much more, is now available in Choctaw’s newest restaurant, because the truck has become a brick-and-mortar reality.

Morris and Brice signed a lease for the space formerly occupied by Old Germany Restaurant before COVID fully hit, and in spite of the challenges brought by the virus, they’ve opened a full-service restaurant.

An instructor at Platt College for ten years, Morris brings a wealth of experience to Amici in Movimento, as well as a desire to fulfill a dream he helped foster in the many cooks he and Brice trained. She was also an instructor at Platt, focusing on front-of-house issues rather than cooking, but her skills as a pastry chef are obvious in the fresh ciabatta. The two are often referred to as a married couple, and while they are business and life partners, they’re not married.

“People call us husband and wife all the time,” Morris said. “It’s fine with us.”

They are certainly a family, though, and both have children who help and play around the eatery, making it a true family restaurant. “Our ten-year old likes to open the door for guests on weekend nights,” Brice said, “so I guess he’s the official greeter.”

The team is rounded out by sous chef Jacori Bradley, whom Morris refers to as a “work horse.” He’s also a bit of an evangelist. He contacted “405 Magazine” with an email and photos to encourage us to come check out what was happening in Choctaw. He was only one of many, though, as Morris’s following is large and enthusiastic, which is to be expected from a popular teacher.

Chef  Stephanie Morrical Miller is the executive chef-partner at The Hamilton, and she studied with Morris at Platt before she graduated in 2008. “He was the perfect instructor,” Miller said. “Smart, talented, funny, engaging, and most importantly, kind. I’ve tried to stay in touch, and he still owes me a beef jerky recipe. Can you put that in the story?”

Italian food, like any national cuisine, is hard to define: fresh seafood, pasta, salads, roasted meats, heavy sauces, light sauces, etc. What constitutes “Italian” food? Locally at least, we tend to talk about rustic versus refined or modern, and then there’s pizza and fast food Italian, too. Morris has settled on “Route 66 Italian,” as a way of describing his commitment to the cuisine and his base of operations.

The Manzo Caldo is perfectly emblematic of what Morris is doing. It is enough sandwich for three people (depending on the people), featuring sliced roast beef tossed in a hot rosemary demi-glace on freshly baked ciabatta and topped with giardiniera – a relish of pickled vegetables. The bread is baked fresh in house by Morris’s business and life partner Kristen Brice.

In fact, almost everything is made in house, including Morris’s delicious Italian sausage, the giardiniera, and the alfredo sauce he uses on his Ham and Mushroom Alfredo. The ham is also quick-cured in house, and it’s definitely not the ham you’re thinking of in your head as you read this. Brice makes the Italian sodas to order, and all the bread is made in house. 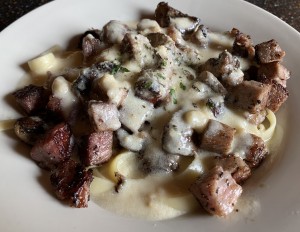 “The only thing we can’t do in house right now is the pasta,” Morris said. “The volume it too much for our three-person team right now.”

Choctaw has much to celebrate with Amici in Movimento, and Morris said the community has been enthusiastic in support of them, as has former owner Mike Turek. “People were already accustomed to coming to this location to celebrate: prom, rehearsal dinners, date nights, anniversaries, all that stuff, so the location has certainly helped.”