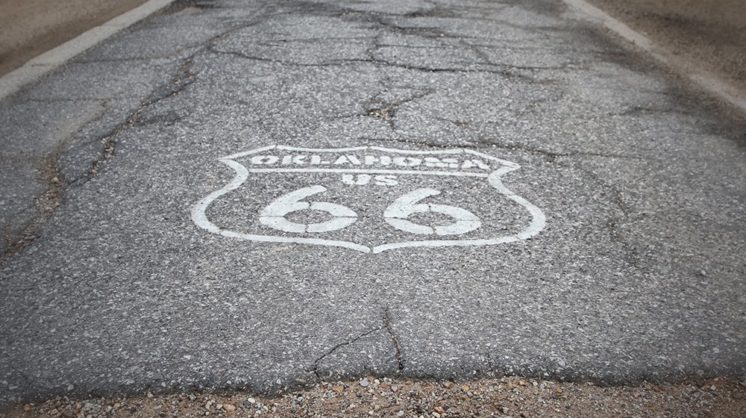 Along this particular stretch of old Route 66, the attraction is not a vintage gas station or curio shop or restored diner: The destination is the road itself. The most rare piece of pavement in the nearly 2,500-mile-long route is located in Ottawa County, near where Oklahoma meets Kansas and Missouri. It is called the Sidewalk Highway, or Ribbon Road. Its claim to fame: At 9 feet wide, it’s the only one-lane highway left in existence from the original Route 66.

Visitors longing to connect with an authentic stretch of America’s most storied road – memorialized in stories real and imagined, from John Steinbeck to Disney’s Cars to bucket-list travelogues – come from the other side of the world to drive these two remaining three-mile sections of weathered pavement.

But what they see can disappoint. The highway, on which construction began almost exactly 100 years ago, is more often than not covered by truckloads of gravel, in an attempt to make the weather- worn road passable to the residents who need a way to access their homes and farms.

“Over the years, the road hasn’t been kept up, because it is primarily used by farmers,” says Amanda Davis, executive director of the Convention and Visitors Bureau in nearby Miami. “It’s not in great shape, and we don’t want it to go away. We want to be able to promote it, and we use it as a hook for the international visitors who come in. It’s a little tricky because the road itself is not in city limits.”

On the weekend before Labor Day 2017, the visitors bureau hosted a town meeting in the historic Coleman Theatre, featuring Kaisa Barthuli, manager for the National Park Service’s Route 66 Corridor Preservation Program. The topic: How best to preserve the pavement without ruining it?

The short answer is that no one knows for sure. But it is worth the effort to find out.

“There’s no other section like this along the entire historic Route 66 from Chicago to Santa Monica,” says Barthuli. “It has maintained a high degree of integrity, workmanship, materials, construction and setting. It conveys a strong sense of historic environment, which means it really hasn’t changed. It has a layer of gravel over it, but this is reversible.”

She suggested applying for cost-sharing programs, grants and tax credits. Davis discussed the possibility of more and better signage, but noted that although visitors flock to Miami to see Route 66, the Ribbon Road is located outside the city limits. In the past, signs pointing the way to the historic road have disappeared with over-eager souvenir seekers.

“There’s lots of facts to take into consideration: local visitors, residents, the county’s resources and capabilities,” Barthuli says. “It’s a multi-pronged issue. A lot of ideas have been thrown out – such as, ‘It’d make it easier if the shoulders were paved.’ But of course, then it’s not a ribbon road anymore.”

Why a ribbon road even exists is a matter of debate. Construction on the road began in 1919, after the end of World War I. It opened to traffic on March 1, 1922, as State Highway 7, part of the Ozark Trail network of roads. Its single lane originally ran for 15 miles, straight stretches linked by half a dozen sharp 90-degree turns. 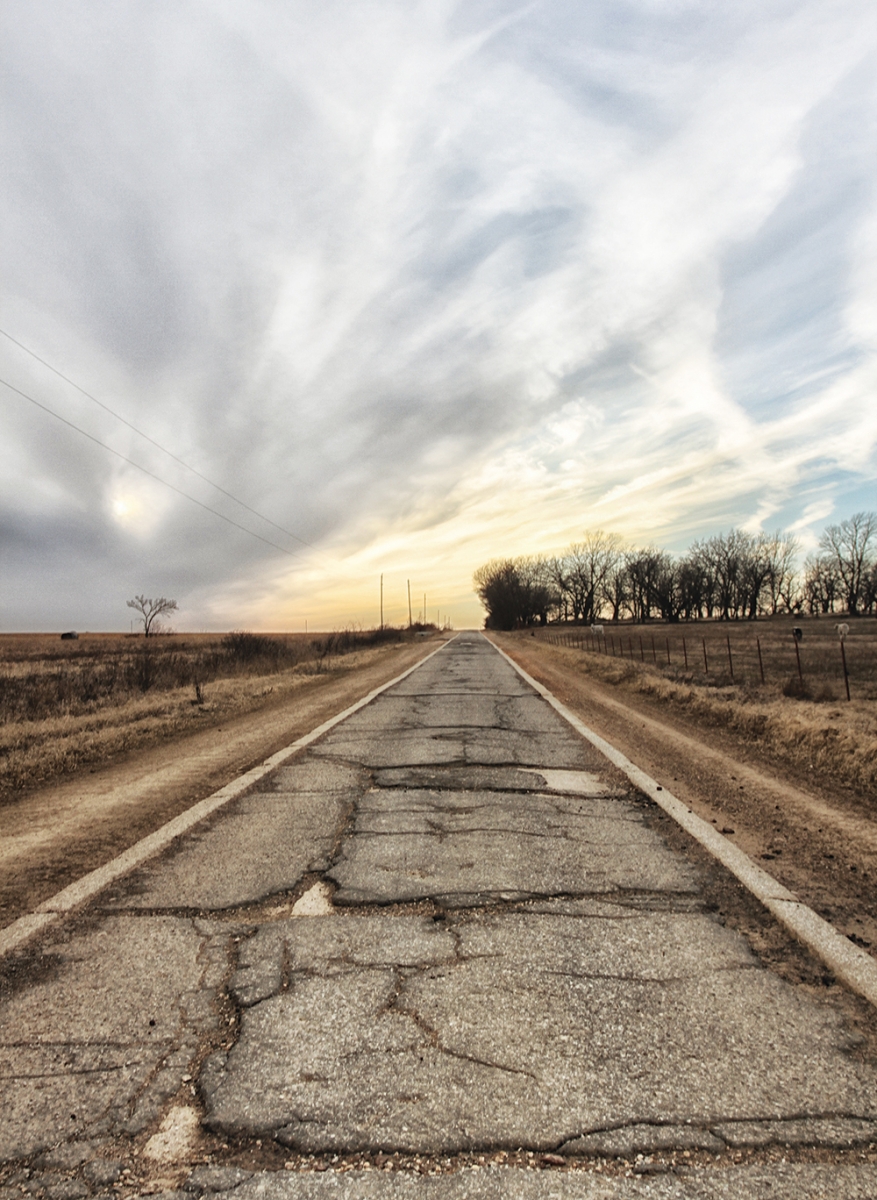 “You know, a funny thing is that the original Oklahoma Department of Transportation records for this road described it as 18 feet wide. Nobody really knows what happened that it ended up 9 feet for this stretch,” Barthuli smiles. The story goes that the budget was tight and that the builders could opt for a shorter two-lane road or a longer road of only one lane. But today, no one can say for sure.

The road features a concrete base, originally topped with “Topeka asphalt” to even the surface with the white concrete curbs, each flanked by a 5-foot-wide gravel shoulder. In 1926, the stretch was incorporated into the new Route 66. For 11 years, it ran beneath cars zig-zagging Route 66 between the Ottawa County towns of Miami and Afton, before being replaced by a newer, wider, faster alignment.

In September 1937, Gov. E.W. Marland cut the ribbon to the Neosho River Bridge, opening an improved route that bypassed the old. It was the dawning of a new era: Now every mile of Route 66 through Oklahoma was a two-lane, paved road.

In the 80 years since, the old Ribbon Road continued to carry local traffic. But wear-and-tear has taken its toll, and the fragile one-lane road is marked by potholes and crumbling pavement. Some sections have been patched and paved over. Since 1984, truckloads of gravel have been spread and graded over the old road to keep it passable.

If not for the pink-granite monument installed nearby, extolling its history and its presence on the National Register of Historic Places, it would be easy not to realize it was different than any other gravel road.

“The base is real good, so it just needs to be updated … repaired,” resident Charm Gaines told KOAM-TV after the community meeting. “A lot of times, we are late [to] places, because we have a lot of lost people there. They love to lay down on the old pavement and have us take their pictures.”

Speaking from her office in Santa Fe six weeks after the meeting, Barthuli reflects on the importance of preserving the road. “The larger part of it, is it’s part of historic Route 66 – an iconic part of America,” she says. “These places tell stories about how we became the people we are today. We’re all so connected to our cars. Our lives are really dictated by the car. The Ribbon Road is a tangible place to show where we’ve been and where we’re going.”

Suggest that the road may not be as significant as other Oklahoma Route 66 landmarks, such as the Round Barn of Arcadia or the Blue Whale of Catoosa, and Barthuli will bristle.

“It is as iconic as the Blue Whale,” she says. “We experience our interstates every day, and understand all the engineering and the safety precautions and the standardization that surrounds us. Even the interstate villages where we refuel and eat, they’re all cookie-cutter copies.

“When you stand on the Ribbon Road, it’s the opposite. It moves something in people, it reminds us of our humanity.”

The worst-case scenario, she said, is that no action will be taken, and the road will continue to deteriorate. The best-case scenario? Discovering a route forward.

“There’s conversation happening about the road’s future. There’s a sheer delight in the road. And people love having the visitors,” Barthuli says. “You go and stand on that road and you’re filled with amazement. It’s really experiential and rooted to our history. This is one of those transitions between traveling by horse, then by horse and wagon, then by car. And you can see it. It’s right there.”

Another meeting is planned, as Ottawa County considers how to balance the desire to preserve the history of Route 66 with the reality of living in the present. 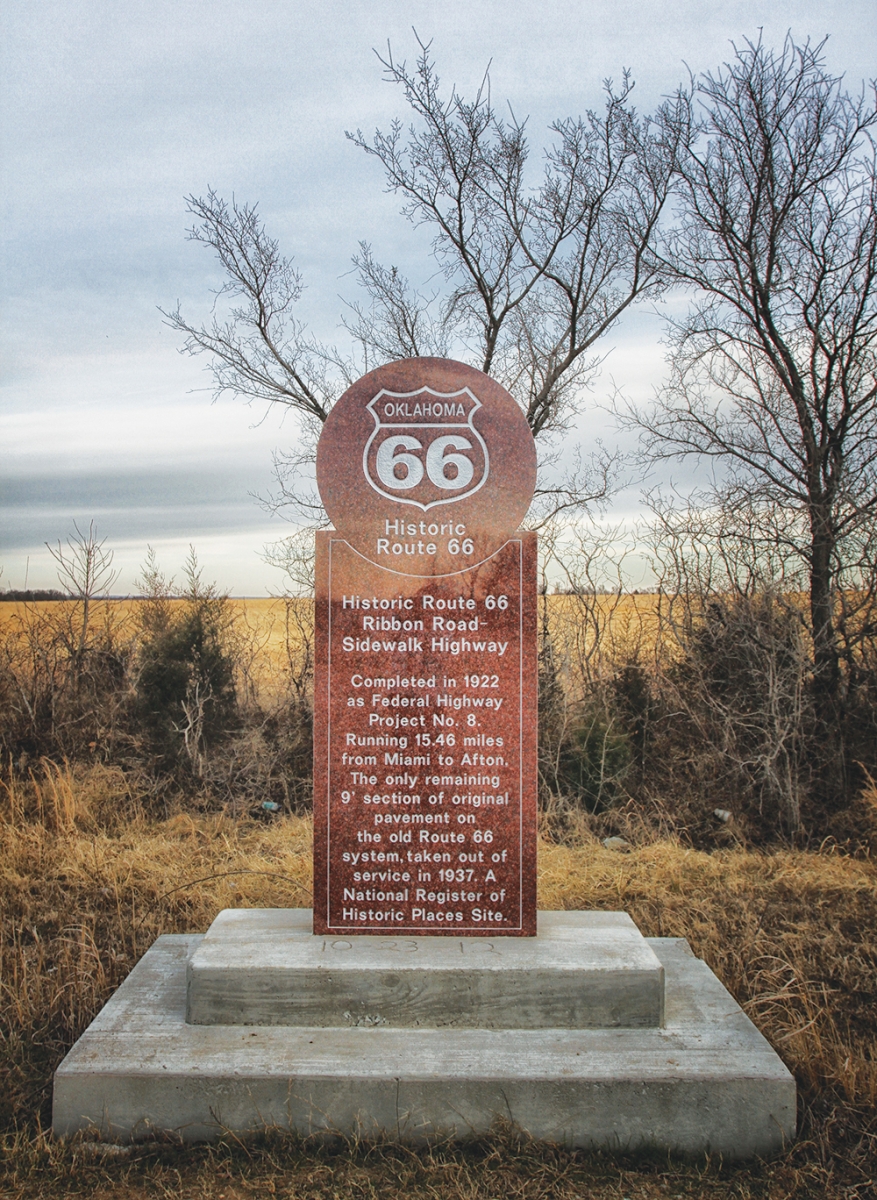 ► History of the Road

Its fame comes not from being the nation’s oldest road. That honor goes to the old Kings Highway, connecting old Indian trails for a road from Boston down to Charleston, or maybe New Jersey’s Old Mine Road, first referenced in the 1640s.

It wasn’t part of the first road across the West; the Lincoln Highway – part mud, part pavement, running 3,389 miles from Times Square to San Francisco – was dedicated on Halloween of 1913.

It is not the most scenic, running through pleasant but not unusually picturesque farmland. Nor is it the busiest.
Though once part of Route 66, the road is not its last surviving stretch.

Yet the 9-foot-wide Ribbon Road is considered among the nation’s most romantic routes. Its evocative name conjures a thin, winding strip curling around the heart of the Mother Road like a bow.

The Smithsonian was looking for a piece of history. The Oklahoma Department of Transportation was looking to demolish a stretch of old Route 66 in Canadian County.

It’s not that its concrete was crumbling. The ODOT issued a release at a time, noting that the surface remained strong, but that the roadway was deemed in “critical condition because narrow lanes, poor sight distance and lack of shoulders made it unsafe for modern travel.”

So in December 2000, a dozen sections of the original 1932 concrete pavement – each 50 feet square and weighing 9,300 pounds – were sliced from the Mother Road near Bridgeport, loaded on flatbeds and semis and transported east.

The pavement was listed in the archives of the Smithsonian as Catalog Number 2000.3074.01, and unveiled in 2003 at the grand opening of the “America On the Move” exhibition at the National Museum of American History.

It remains on permanent display with other Oklahoma Route 66 artifacts including road markers and the old Hamons Court neon sign once displayed at Lucille’s in Hydro, as well as a kerosene lamp and bowl that made the trip west with the Haggard family, who drove the road from Oklahoma to California. Their son Merle was born in Bakersfield, and wrote of his family’s travails on his way to becoming a country music icon.

► History in the Making?

The National Park Service’s Route 66 Corridor Preservation Program began in 2001, and will sunset in 2019. A bill introduced in the House of Representatives earlier this year, H.R. 801 – The Route 66 National Historic Trail Designation Act – would reclassify the road as part of the Route 66 National Historic Trail, “administered by the National Park Service in a manner that respects and maintains its idiosyncratic nature.”

H.R. 801 has bipartisan support, and is co-sponsored by 11 Democrats and seven Republicans, including Oklahoma Reps. Frank Lucas and Tom Cole. If the bill passes, Route 66 would become the 20th such pathway run by the NPS, joining historic trails including the Lewis and Clark, Santa Fe and Iditarod.

Many of the Route 66 ruins and relics that have survived into the 21st century face an uncertain future. Each of the 20 tail fins of the 10 cars planted nose-down at Cadillac Ranch, west of Amarillo, have been sheared off by souvenir seekers. An artist in Texas peels petrified paint from the cars to polish and seal under glass for necklaces and earrings.

In June 2017, the 6-by-4-foot Coca-Cola Owl Court sign – which had marked the site of the rock-walled gas station, motel and cafe that greeted Route 66 visitors to Oklahoma City since the 1930s – was stolen. Despite pleas for its return, no leads have been reported.

In 2013, the owners of Oklahoma City’s Carlyle Motel sold the porcelain-coated neon sign for scrap after it was battered by hail. Its arrow was salvaged, and parts sold to collectors around the world.

The news, however, is not all bad. The iconic 66 Bowl sign that had beckoned travelers since 1959 was lowered from its perch as the bowling alley was auctioned off in 2010. Last year, it was restored and rewired and now blinks anew 50 miles to the west, near Chandler, facing traffic on Route 66.