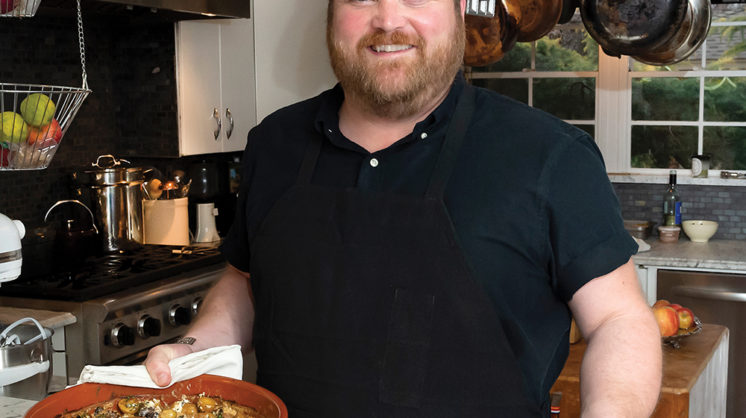 Russ Johnson is rather busy these days. He’s chef-partner at Ludivine and owner of R&J Lounge and Supper Club, and he’s working on a third concept that will open in the current Ludivine space next year. Ludivine is moving to the R&J building – build-out is underway – where it will occupy the north side of the facility. As such, he seldom has time these days for his hobbies, including a treasured collection of classic cars and motorcycles.

A native of Oklahoma City, Johnson went to Westminster and Bishop McGuinness before completing a degree in restaurant and resort management at Colorado State University.

“I did some time in a couple hotels in Denver and Aspen, but I really loved the year and a half I spent at this small French bistro in Denver,” Johnson says. “It became a model for much of what I’ve done since.”

The bistro was a classic French chalkboard restaurant with 26 seats and a rotating menu. The owner, who had recently arrived from France, simply replicated what he was used to. As Johnson recalls, this was before most people were even thinking about rotating menus and farm-to-table concepts. He might have stayed in Colorado longer, but his growing sense that he was ready to do his own thing, and the news from home that his mother’s breast cancer had returned, brought him back to Oklahoma.

Both his parents were excellent in the kitchen, but Johnson remembers his mother – she passed away in 2011 – as a baker more than a cook. On the other hand, her love for “’50s comfort food” helped give shape to R&J. His father, a doctor, loved to grill, especially healthy food, so Johnson got the best of both culinary traditions as a kid.

“I always liked being in the kitchen,” he says. “My mom saved Polaroids of food I cooked in like first grade, and she remembered me as a toddler climbing on the counter to get at the spice rack. I definitely remember watching cooking shows when I was in middle school, and then developing knife skills so I could experiment with cooking.”

Johnson’s relationship with Jonathon Stranger via the old Table One private chef service led to the opening of Ludivine in 2010. Since then, Johnson has established himself as one of our city’s best chefs and restaurateurs, because he’s both a talented chef and a cerebral restaurant professional.

For his recipe, Johnson chose to share a tartiflette – a French potato-and-cheese casserole that is a savory pleasure on cold winter nights.

• Preheat oven to 300F.
• Sear the bacon very well, on all sides, in a dutch oven.
• Pour the tomatoes and red wine over the bacon.
• Add 6 cloves of the garlic and 1 tsp of each herb.
• Bring to a simmer, cover and braise in the oven for 2 hours.
• Remove the bacon from the pot, removing any excess tomato mixture.

Pro Tip: “This resulting tomato sauce is absolutely delicious. It makes the perfect base for cassoulet beans, and nearly resembles Theta sauce, and may be used accordingly.”

• Place the bacon in the refrigerator, uncovered, and chill long enough to firm up.
• Preheat oven to 425F.
• Melt butter in small saucepan over medium heat until it stops sizzling.
• Whisk vigorously to prevent the browning solids from sticking.
• Remove the pan from the heat as soon as the butter begins to smell nutty.
• After it has cooled slightly, pour butter into the pitcher of a blender.
• Add the remaining two cloves garlic and the remaining herbs.
• Add generous pinches of salt and freshly ground black pepper.
• Puree.
• Add olive oil if needed.
• Toss the potatoes in this mixture and heat on sheet tray in oven until just tender, about 10-15 min