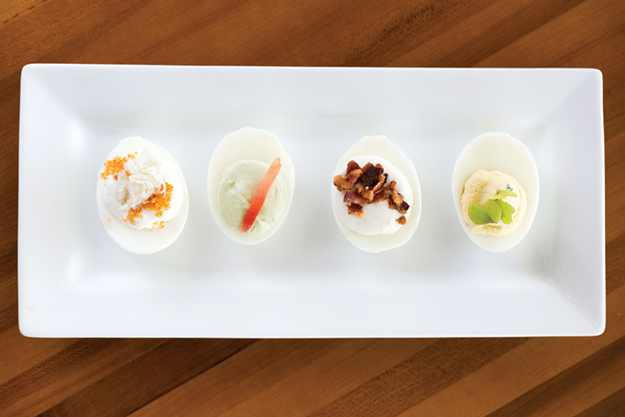 Sometimes a Restaurant Must Work Fairly Hard at Decor in Order to Compensate For its Location – a gourmet paradise or lavish steakhouse will be more successful if it doesn’t feel like it’s in a nondescript strip mall, or the basement of an office complex. But other restaurants have their decorative work practically done for them by virtue of their surroundings; in a spot as redolent with charm as the Myriad Botanical Gardens, the primary goal would be to concentrate on making the food marvelous and let the scenery work its own magic.

A massive spread of floor-to-ceiling windows dominates the space’s perimeter, offering a panoramic view of carefully tended natural beauty with which designers wisely chose not to contend. The interior is comfortably minimal in furnishings, with well-spaced tables and a sweeping curve of bar. Incidentally, the copper mugs thereon are used to serve the cocktail picturesquely named “Scent of a Mule,” which has a heck of a jalapeno-laced kick.

While it might be difficult for diners to tear their attentions away from the view (even at night, the soft glow of the Crystal Bridge is mesmerizing), focusing on the fare provides its own reward.

The Deviled Egg Flight is a tempting choice for starter; the sampler of four different recipes is a cute idea, with nice visual appeal and solid execution (for the record, the bacon and blue cheese entry is the clear standout) – but even though it’s a very good dish I’d be remiss in my delicious duty if I didn’t try to steer you toward the Chicken and Waffle Fry Nachos, which are simply fabulous. Perfectly chewy with crispy-outside waffle fries smothered in melted cheddar cheese and pulled strips of rotisserie chicken marinated in a tangy tomato sauce, topped with bits of avocado, grilled jalapeno and a drizzle of slightly sour crema … the portion is ample, but also not big enough. This is one of those “keep eating until it’s gone and then look for more” dishes.

The tender chicken that adds such savor to the nachos also stars elsewhere on the menu: in a couple of sandwiches, in a bowl of soup, served whole with a pair of side dishes and bolstering a terrific “entrée salad” of spinach leaves, slivered Granny Smith apples and crunchy clusters of roasted nuts dressed with a bacon vinaigrette (two words that should be paired more often) for a solid lighter option.

Speaking of lighter fare, I didn’t order one myself, but the Park House managed a first for this fairly dedicated carnivore: I tried a Veggie Burger that was actually pretty good. I can’t speak to the quality of the piquant romesco sauce or what it adds to the overall flavor since my companion was guarding her portion jealously, but I enjoyed how the chef didn’t try too hard to mimic beef by making the substitute homogenous. Leaving the “patty” more loosely packed lets the textures of the quinoa and black beans assert themselves and play off each other to beneficial effect.

My chosen entrée was the Pasta Carbonara, and I stand by it – while it definitely needs a dab of pepper and I personally might have enjoyed a slightly creamier sauce, the pasta was perfectly cooked, the flavors balanced well … and it’s hard to argue with such massive, tender cubes of pork belly. (See above, re: carnivore.)

If all that bounty leaves you with any appetite at all, soldier on – the dessert Donuts and Coffee is an ideal capper featuring a trio of miniature confections and a mug of espresso-flavored mousse in which to dunk them.

All in all, I’m a Park House fan. It’s not the cheapest date in the OKC metro, but the menu is broad and creative, the execution is deft and the location amid the luxuriant splendor of nature is a thing of beauty.

Make time for a stroll. Depending on where you parked and how hot it is, you might not have much spare energy to invest, but the Myriad Gardens are more than a splendidly scenic backdrop; they’re thoroughly worth an exploratory ramble.

Season with certainty. They’re unmarked, so this could be crucial – the shaker with two holes is salt, the pepper has three.