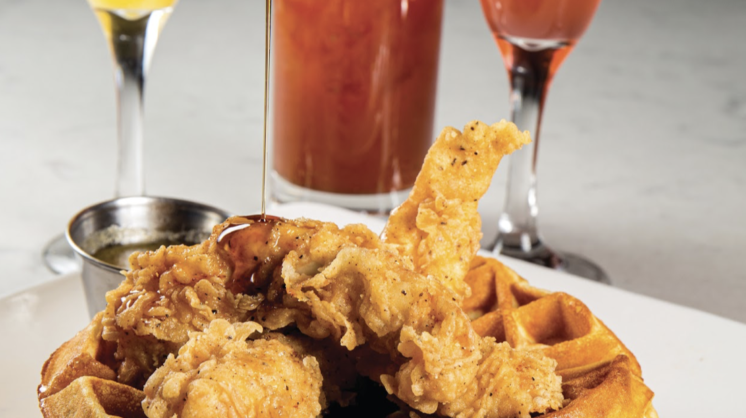 Chicken and waffles really don’t make sense; not in the way that other foods are natural pairings and lie beautifully on a plate together. With chicken and waffles, it’s stack or sprawl, because how else do you plate things that don’t actually work together? Food historian Tori Avey traced the history of chicken and waffles (the work appeared in PBS publications), and the origin of the dish makes a little more sense. She writes:

“The earliest American chicken and waffle combination appears in Pennsylvania Dutch country during the 1600s, when home cooks made waffles and topped them with pulled chicken and gravy.”

Essentially, it was a savory dish, and the waffles were closer to flatbread, so it was a very American variation on a European dish that began as a way for bakeries to make communion wafers. Weird, right?

Still, flatbread with chicken and gravy is a sensible dish, both practically and aesthetically. The modern version, Avey says, arrived in Harlem in the 1930s, when jazz musicians stopped into Wells Supper Club after a gig, a time at which they had the leftovers from dinner and a waffle for the upcoming breakfast shift. That soul-food-inspired version is now the archetypal chicken and waffle dish.

The dish is a favorite of kids and adults, and both components are easy to love. Some restaurants avoid the hassle of cooking chicken on the bone by using strips; a compromise that, when done properly, definitely pays off.

McClintock’s Saloon and Chophouse, 2227 Exchange in Stockyards City, offers both versions. Co-owner Michel Buthion drove to Tulsa to purchase the broaster – a piece of equipment that uses steam and hot fat to cook – because he believes it makes the best fried chicken. Tasting McClintock’s dish, it’s hard to argue with him. 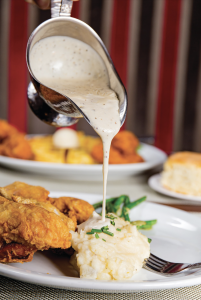 Executive chef Ethan Williams said he uses a proprietary mix for the batter that comes from the company. “We asked for the ingredients for food allergy reasons, but they won’t even give us a basic ingredient list,” he says. The chicken is so good, though, that they can be forgiven for naming it Slo-Bro Coating.

Pub W also features chicken strips with the waffles at their four metro locations, and as tasty as their chicken is, the star is actually the waffle. Syrup is one of those condiments about which people are regularly divided. Maple or nah? Warmed or room temperature? How much is too much? 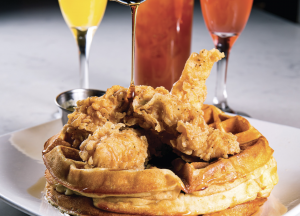 You may not need any with Pub W’s waffle, given that it’s slightly sweet and wonderfully buttery without syrup or butter added. The strips are tender and juicy – the fork slides right through with very little resistance – and we tried them with and without gravy. We recommend both choices!

Bar Cicchetti, 121 NE 2nd, departed from the traditional route with its coccoli and chicken, a nod to the European cuisine found in the Deep Deuce restaurant owned by Jonathon Stranger and Fabio Viviani. Coccoli is a traditional Italian dish made with fried beignet batter, and for the Bar Cicchetti variation on chicken and waffles, it adds spicy honey sauce and chicken strips. The touch of heat is nice and very much in the comfortably warm range. 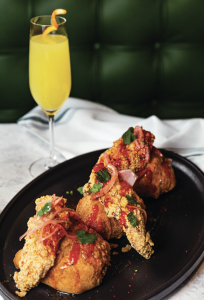 The best savory version was the spicy potato and leek waffle at Stella Modern Italian, 1201 N Walker. It’s served with a fried chicken breast and sausage gravy, so schedule in a nap after brunch.