Sensational Vegan Flavors in the 405 - 405 Magazine 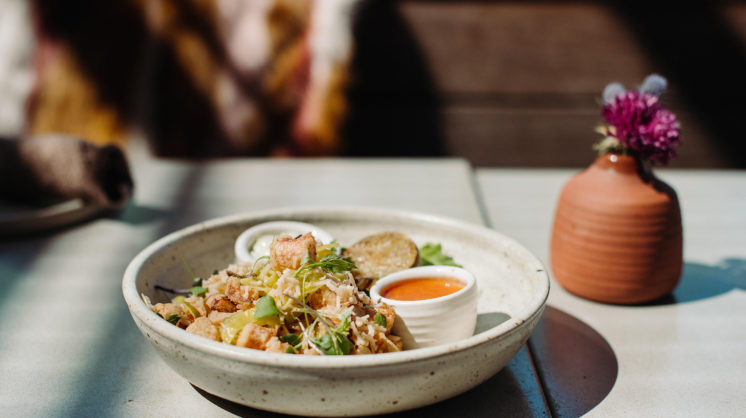 Assume for a moment that you’ve given up cake, and that before making the sacrifice, you really loved cake, as in you routinely ate some kind of cake every day. But you gave it all up. A well-meaning friend knows this and comes to you with a “cake.” Except it’s actually a vegetable puree molded into the shape of a cake, and each bite only serves to remind you of how wonderful cake was. This was vegan cooking for most of the last 20 years.

Nothing tastes like biscuits and gravy, fried chicken or hamburgers, and they’re wonderful because each bite is a comfort bomb of fat, salt, protein and flavor. Fortunately, chefs are now producing intensely flavorful vegan food – some have been doing it for a long time, to be fair; most people just didn’t notice – by relying on fresh, quality ingredients, a robust seasoning palette and solid techniques to build layers of flavor.

Take one bite of the hearts of palm “calamari” at Frida (500 Paseo), and you’ll feel the culinary world shift. No way is this vegan. Yes, it is. Chef Quinn Carroll knew he needed to mimic that wonderful, briny seafood tone, so he marinates the hearts of palm in kelp seasoning and lime juice. The combination of umami from the kelp and vegan Parmesan, citric acid from lime and pepperoncini, and the texture and nuttiness of ground pepitas and a gluten-free masa makes for a complex, layered dish that manages to trick the palate into experiencing seafood. You won’t care about the composition, though, because each bite is an absolute burst of intense flavor.

Indian food restaurants have been quietly producing great vegetarian and vegan food for many years. Unfortunately, nothing does well when it sits on a hot line too long, so head to Tandoor (1901 E Reno Ave.) or order off the menu at one of your favorite places. Chana chaat is a chickpea dish made with coriander, tamarind, green chilis, cumin, tomatoes and onion – every Indian cook has his or her own recipe – to create a refreshing, zippy side dish that doubles as a wonderful lunch. It can also be served cold or hot, and that matters a great deal in the Oklahoma summer months.

Talk to vegans around Oklahoma City and one name pops up more than any other: Patrick Clark II, chef-owner of The Red Cup (3122 N Classen Blvd). He makes vegan food people want to eat, and not just vegans. He has a few overarching philosophies when it comes to vegan cooking: “I want it chock full of vegetables, and I want to incorporate weird things occasionally,” he says. “You have to have an extensive palate to be a good vegan cook, though. You can’t really do this well and not like certain things. It will always show.”

Clark uses about 43 different herbs and spices on a regular basis. To do vegan well, you have to build layers. There is no getting away from it, and Clark is just enough of an iconoclast that his method works beautifully. The best introduction to his cooking for now – he’s working on a menu change – is his tofu scramble, and yes, it’s loaded with vegetables.

Chef Jeff Chanchaleune makes a beets and Brussels dish at Goro (3000 Paseo) that Clark mentioned in the course of our conversation. The dish stands out because it’s pretty simple: sous vide beets, Brussels sprouts, fried shallots, mint. The beets are sous vide with lemon juice, but the main acid is a vinaigrette and some yuzu and rice vinegar. Chanchaleune said he begins with one part acid to four parts fat on his vegan dishes, and then builds umami layers with brown sugar, soy sauce and miso.

Complexity makes vegan easier to enjoy. The Vegan ‘Rito from Burrito Baby (now on the menu at Revolucion, 916 NW 6th St.) relies on the texture of flash-fried cauliflower to contrast the guacamole, cilantro rice and black beans. Mushy is never good. The burrito, like all Burrito Baby’s offerings, is big enough for two.