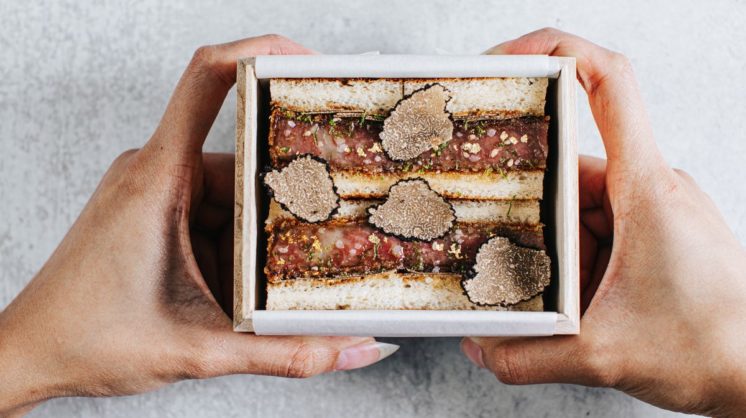 Sandoitchi was supposed to be a restaurant. Stevie Nguyen had a solid network in Dallas, and his resume of work at Momofuku and Morimoto in New York virtually guaranteed people would pay attention. Working with his friends Keith Tran, Angel Acosta and Andy Sirois, they ended 2019 with a menu, and began scouting for a location in the greater Dallas area to do a Japanese restaurant with breakfast and lunch.

“Angel and I had been going to Japan a couple times a year,” Tran says. “They have convenience stores there – nothing like the ones here – that serve really good food, including these nicely packaged sandwiches. They’re designed to look good on a shelf. We talked about the possibility of elevating that.”

That was the plan. Nguyen, Acosta and Sirois would handle back of house, and Tran, whose background is in fashion (design, production, merchandising and retail) would assume front of house duties, as well as social media and communications. They had everything: a chef-partner with a stellar resume and a ton of skill, talented cooks and a front of house who understood PR and marketing. Like so many plans, theirs ends up being a COVID story, but rather than killing the dream, the pandemic reshaped it – the team proved more capable than they realized of adapting quickly, working under the most bizarre of conditions … and getting the one lucky break they could not have expected.

“When Chrissy Teigen posted about us, it was like holding onto a rocket ship,” Tran says. More on that in a minute.

Shortly after the pandemic hit Dallas, some patrons of Asian cuisine started a Facebook group called Asian Grub in the DFDub. Tran remembers watching the group go from nothing to 20,000 followers in a month. And not just followers; the members supported mom-and-pop Asian restaurants with their money and their social media presence. They kept restaurants alive at a time when all restaurants were struggling, and because of the racist invective coming from some quarters, Asian restaurants were struggling even more. Before they worked the network, though, they built what Tran calls a feedback loop.

“Stevie made 30 sandwiches at his house for our friends, and we got an immediate yes,” Tran says. “He’d parked @sandoitchi, but we hadn’t posted anything yet, so the first group just started tagging Stevie.”

The money spent on those first 30 sandwiches was the only out-of-pocket expense Sandoitchi had during start-up. Everything after that was preorders. The first post was June 14, 2020. The team was using a shuttered restaurant, and their new endeavor made it possible for them to hire back the kitchen staff. Orders came in as Instagram messages and went on a spreadsheet; payment was via Venmo. It was as piecemeal and inefficient as it sounds, but it worked. They sold 150 sandos the first week, 500 the second week, and by the end of the first month, they sold 1,000 in a week. They needed structure.

Oklahoma City-based TapTapEat built a quick website for them, only the first of the interesting connections to OKC that would emerge. The website took preorders, and because it was pickup only, it was safe and comfortable during the worst of the pandemic. It also meant they knew exactly how much food to order, so again, no out-of-pocket expenses, and no waste.

After two months in Dallas, they were at nearly 4,000 sandwiches a week, and the process was well-refined. The problem? No more free kitchen, because restaurants were reopening. Tran was back in California, which “is where you go when you’re in the fashion industry, and I thought, ‘If we believe we have a good concept, let’s test it out here,’” Tran says.

Santa Ana went really well, thanks to a large influencer population. It’s California, after all. Several influencers posted about it, and Chrissy Teigen, well, Tran put it this way: “She just really wanted a sandwich.” They ended up at her house doing a private lunch for Teigen, her also-famous husband John Legend and Teigen’s mother. And then she posted on Instagram.

“People started reaching out from everywhere,” Tran says. “We realized we had all these new possibilities.”

Texas was first: They did a sneaker shop in Houston. They’ve also done a food truck that they wrapped and unwrapped in 24 hours. Nguyen is from New Orleans, so they set up shop there. They’ve done Austin, too, and every time they show up, the crowd gets larger. Oklahoma City got lucky, since thanks to TapTapEat, Sandoitchi agreed to come try us out. Tran said they were put in touch with Rachel Cope, who just happened to be sitting on a now-defunct and empty Tori Tori, so they had a dream location with a full kitchen – much easier than a sneaker shop.

It wasn’t the first time in OKC for Tran, who lived here when he was a kid. In fact, his family had Pho Ca Dao, a pho restaurant on Classen. When they moved, they sold it to the Nguyen family, who, as fate would have it, sold it this month (while Sandoitchi is in town) to start their retirement. It was an unexpected footnote to the story of a pop-up from Dallas in the Plaza District. The world is never as big as we think it is, and we’re always only a connection or two from the Asian District and Chrissy Teigen.