Souped Up: ‘Tis the Season for Something Steamy - 405 Magazine 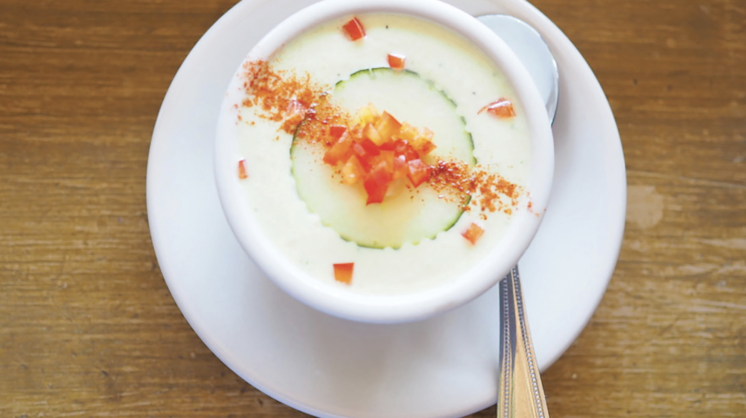 Soup finds its culinary home in a broad space between afterthought and entrée. The space and intentionality between “let’s clean out the fridge” and “don’t forget to pick up truffles” is enough room for just about everyone’s idea of soup: humble to complex, practical to indulgent, and starter to entrée. But for all of us – surely – our relationship to soup begins at home, as a kid, where soup is served up with a sandwich on the side or as a side to a sandwich, and in Oklahoma that usually means tomato soup and grilled cheese.

When an editor asks for a story about soup, you can spend a lot of time thinking about something that never occupied much mental territory. What is soup? What has to be present for it to be soup? How many varieties are there? Is chili soup? How do you make stock? Roux or no roux? It’s a subject far larger than seems reasonable given that it’s soup. You likely don’t give soup much thought, not like chips and salsa or cheeseburgers or tacos or pizza. It’s just soup. Yet…

Soup has been part of the culinary history of humans as far back as prehistory. That makes a sort of sense when you consider the practical aspect of its flexibility: it makes a little go farther, be it meat, vegetables or starches. A pot of stew (Is that soup? More on that in a bit.) is a meal for a family, whereas a few ounces of meat and a bowlful of vegetables might only feed one or two individuals.

Beyond the practical side, though, is the pleasant reality that soup done well can be elegant or comfort food, or some magical blend of both categories. Take gazpacho for example. The chilled, Spanish soup is presented beautifully at The Metro Wine Bar & Bistro, one of the city’s few restaurants to take soup seriously. It’s a light, flavorful, refreshing way to start a summer meal, or combined with a freshly baked roll, to be a meal.

“It’s salsa you can drink,” Able Blakely said, offering the other take on gazpacho. Blakely owns Savory Spice on Western Ave., and he’s an evangelist for chilled soups. “Soup is comfort food,” he said. “We sell seasoning for a lot of chicken noodle, and then beef stew in winter, and two weeks a year I can’t keep enough chili powder in stock. Is chili soup?”

We talked to dozens of people, and many of them weren’t having it. For them, chili is a category and stew is a category, but arguments like this exist only for the sake of argument, not because something important is at stake.

Dictionaries and encyclopedias both describe soup as food cooked in liquid, so by that definition, and for the sake of this project, chili is soup.

The great surprise of this part of the soup project was that Metro owner and soup savant LaVeryl Lower outed herself as a closeted Texan when she declared that chili should not be made with beans, ever.

Good soup starts with good stock, much like good pie begins with good crust. When the container is also the ingredient that defines the meal, the container has to be delicious for the dish to be successful. We asked Chef Kurt Fleischfresser and Elena Farrar for some best practices when it comes to making stock.

“One of the biggest misconceptions is that the longer you cook stock, the better it is,” Fleichfresser said. “Really, it’s about cooking it for the right amount of time. Doesn’t matter if it’s fish or beef, the stock is done when the connective tissues in the carcass are broken down.”

The simplest way to determine this? Lift the bones with a fork, and if they fall apart, the stock is done. Cooking it longer will make it “muddy,” according to Fleischfresser. “If you’re looking to add depth of flavor, cut an onion in half, roast one side over an open flame until it’s burned, and then drop that in the stock pot,” he said.

Farrar works with vegetarian and vegan soups more than most places at Elemental, and she starts with Parmesan rinds for vegetarian stock. “I add a few to the pot, with garlic, onions and seasoning appropriate to the soup I’m making,” she said. For vegan stock, she starts with flavorful vegetables and garlic, and then will work with miso or garlic (or both) to add savory notes.

The Seasoning Matches the Style

Chicken noodle is still the archetypal soup for many Americans. The overcooked noodles and tiny chunks of meat,were childhood companions. What makes chicken and noodle work? Seasoning that matches the soup, including parsley, bay leaves and sage. Change the seasoning, and you change the flavor, complexity and tone of the soup. Chef Oden said Native American soup dishes from this region were usually seasoned with crushed juniper berries (“They’re perfect with bison or venison.”), sage, Mexican oregano and salt. “No pepper, though,” she said. “They wouldn’t have had pepper.”

Figuring out which spices and herbs go with what style is a simple matter of research, and Blakely’s team is ready to help, too. Savory Spice keeps spice blends on hand for different styles of soup, as well as a large selection of single spices.

Cream soups dominate Oklahoma menus, and that’s largely because a cream soup can sit in a hot pot all service, but a pasta-based soup would overcook. Cream-based soups are rich and flavorful, but are nutritionally equivalent to liquefied donuts. Broth-based soups or even pureed vegetable bases without cream are much healthier, and with the right techniques, can be delicious.

Oklahoma is dominated by a few styles, but a wide variety exists if you know where to look. Pozole and Caldo de Mariscos from Mexico, Capoon from Laos, chowder from Boston, Pepper soup and Ogbono from West Africa, Minestrone from Italy, Gazpacho from Spain, Vichyssoise from France, and Bun bo Hue from Vietnam – we have them all, and so many more.

We asked chefs from around the metro to give us recipes for some of their favorite styles. You’ll find them online, including a version of The Metro’s chilled avocado-cucumber; the original recipe was developed by the late Chef Chip Sears and still used by The Metro. The beauty of recipes is that they allow us to continue to share in someone’s life – mother, grandparent, chef – even after they’re gone. The recipes are designed to be doable at home for cooks of all talent levels.

Heat the oil in a 6-quart pot over high heat and brown the meat in batches. Set aside. In the same oil, saute the onions until golden.
Add the garlic and saute 1 minute. Return the meat to the pan along with any juices that may have accumulated. Add the broth, potatoes, salt and bring to a boil. Reduce the heat and simmer for one hour or until the potatoes are tender. Add the green chile and the tomatoes, and cook 20 to 30 minutes more at a simmer. Add the cilantro, stir and serve with grilled tortillas or corn bread.

* Hatch chiles the Best! but optional
** I prefer Cento brand tomatoes and just smooshing them with your hands is effecient and satisfying.

Using beef broth for this but beef bone broth or buffalo bone broth the best!