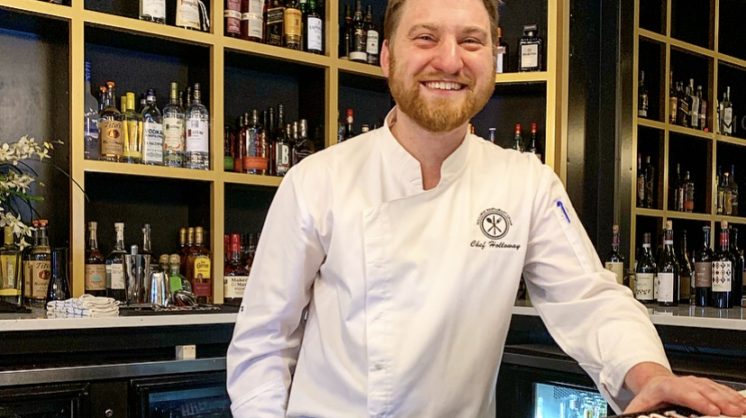 Sparrow Modern Italian opens for business May 29 at 505 S Boulevard in Edmond, in the space formerly occupied by the Martini Lounge.

Sparrow is the newest concept from the Holloway Group, which also operates Boulevard Steakhouse and both Café 501 locations. The restaurant marks a return to the beginning, in a way, for founder Pete Holloway: He opened the first Pepperoni Grill in the metro, so Italian food is where he got his start.

“I like the return to Italian,” Holloway says. “We’re doing it differently this time, more modern. The great flavors will still be there, and even some of the dishes, but they’ll be at another level.”

Chef Jeff Holloway will be the executive chef for Sparrow – as well as all Holloway Group operations – and he’ll share responsibilities at Sparrow with Chef de Cuisine Joel Wingate. Chef Holloway said the food would be a refined version of classic dishes, with inspiration taken from many places, including Del Posto’s famous 100-Layer Lasagne. [Ed: This is the NYC restaurant’s preferred spelling]

“Our pastas will be handmade in house or sourced from Chris Becker’s Della Terra Pasta here in Oklahoma City,” Jeff Holloway says. “We want classic Italian, but we want to focus on sophisticated dishes, not huge portions.”

One of those sophisticated dishes is the mushroom agnolotti, which features house-made pasta in a beautiful plating. Combined with fresh ricotta and an assortment of wild mushrooms, the dish is a smaller portion than you might get from a national Italian franchise, but the flavors, the silky texture of the fresh pasta and the presentation add up to an experience that’s impossible to duplicate at a chain restaurant.

“It needed a remodel and fresh, new look, and we decided it made more sense to do food than a bar, especially where we’re located,” he says. “We got with Chris England for the branding, and we’re very pleased with how everything has turned out.”

The new space is modern, well-lit and open. Rather than the tucked-in, softly lit corners and cubbies of the Martini Lounge, diners can see all the way through three rooms, and the bar is in the back of main dining, not occupying a central space – which is appropriate for a concept that is meant to focus on dining, not booze. Pocket doors can still section off dining for private events.

Pete Holloway said the wine list will be “98 percent Italian,” but a few domestic bottles and glasses are available, too. The Holloways’ oldest son, Andrew, is the associate winemaker at Napa Valley’s Rombauer Vineyards, so those wines have a prominent place on the list, as they long have at Holloway Group restaurants.

A children’s menu is available, with generous portions, especially the pasta dish. One of the highlights of the meal – for kids and adults – is the DIY cannoli setup for dessert. Pipe your own pastry cream right into the hollow shells, and then choose from a checkerboard serving dish with seven optional toppings, including chocolate, fresh strawberries and sprinkles. For the more conventionally minded, Sparrow offers a modern take on tiramisu, as well.

Sparrow will be open seven days a week, and Pete Holloway said that plans for lunch and brunch will follow in time. In the meantime, Italian lovers should visit, for dinner, and be ready for their taste buds to soar.