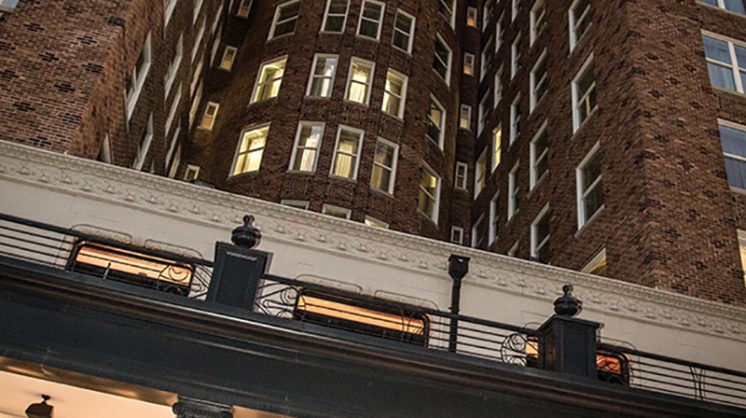 Tales from the grave continue to baffle believers and naysayers alike. Many people in Oklahoma City have heard the urban legend that the tenth floor of the beautifully restored Skirvin Hilton is haunted. Above the dark wood-paneled walls and elegant chandeliers of the lobby, guests say they hear doors slamming in the middle of the night and an unseen baby crying in empty rooms. A few even claim to have seen a spectral woman appear in their rooms. Rumors tell that the woman is W.B. Skirvin’s hidden lover, and the baby is their illegitimate daughter, both killed when the mother jumped to escape their imprisonment.

Although researchers have been unable to find corroborating evidence in archives, and managers at the hotel have reported no sightings, the debate about the ghost continues. Whatever the truth, its legend is enough to provide a little psychological warfare against visiting sports teams. Even The New York Times noted “Effie” spooking NBA players of the Knicks, Bulls, Suns and others. Yet the Skirvin is only one among many of Oklahoma City’s spooky sites.

One of the lesser known examples, although perhaps more notable, is the Governor’s Mansion to the east of the state Capitol. There, Oklahoma’s ninth governor, William “Alfalfa Bill” Murray, is said still to roam despite his term being up in 1935. Murray was famous for his cost-saving measures during the Great Depression, such as turning the Capitol grounds into pasture where sheep could be raised and the wool sold to save Oklahoma tax dollars. More infamously, Murray held his business meetings in red long johns while smoking cigars. Anyone who complained simply was not invited to the meetings any longer. 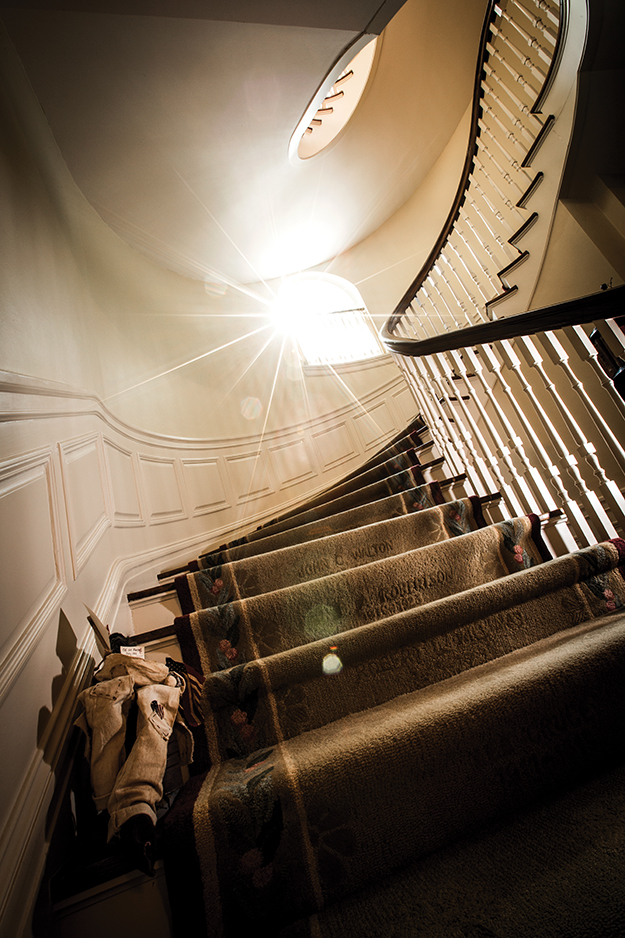 Like many of Oklahoma’s governors, Murray lived in the state-provided mansion. Built during the oil boom of the 1920s, the Dutch-Colonial style home features limestone walls that match those of the Capitol, a tennis court first used as a helipad for President Lyndon Johnson and an Oklahoma-shaped swimming pool. The building also is said to hold the spirit of Murray, who lingers to watch over today’s governors.

According to staff, occupants and even guests, Murray haunts the stairs leading up to the second floor and causes people to stumble as they pass by. Former Oklahoma first lady Cathy Keating once told the Chicago Tribune that she herself had been tripped. Keating didn’t believe in ghosts, but the stairs were inspected and found to be level, causing the answer to seem a little more spectral. Still, she seemed to bear no ill will. “He’s ornery, and he’s fun.”

Langston’s Western Wear in Stockyards City is another site noted for its past residents refusing to pass on. In the early days of Oklahoma City, when the Stockyards were a rough-and-tumble center for cowboys fresh off the range eager to spend their pay, this building served as a dance hall. The lower floor had a wide barroom and stage for entertainment, while the second floor served as a hotel where cowpokes could find some rest and, allegedly, a little companionship. 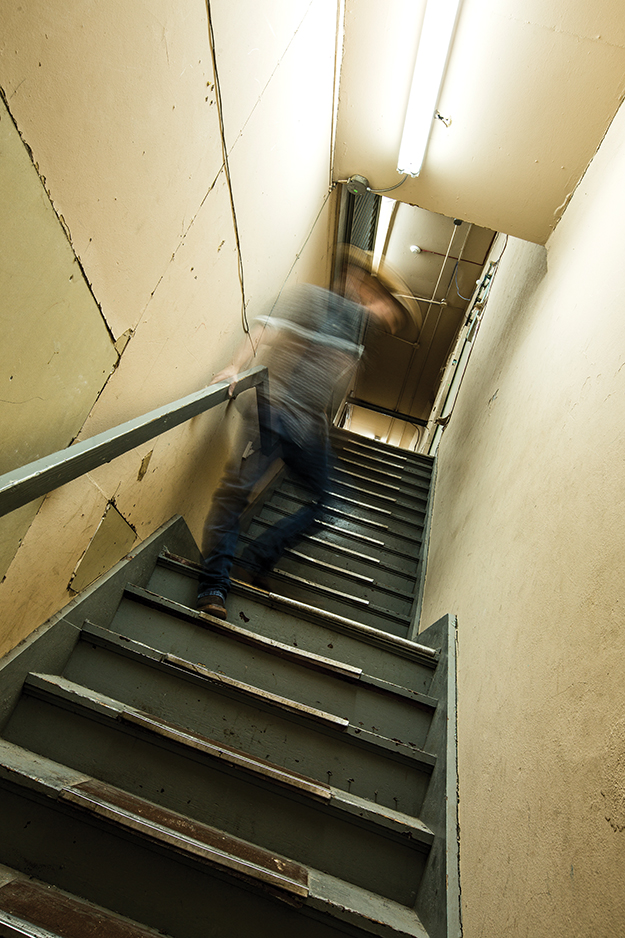 Today, Langston’s is a great place to search out a new pair of jeans and a must for tourists visiting Oklahoma City. More than just the fashion of the past is said to stay on, however.

The story goes that two sisters worked at the dance hall, Rose and Patty (“Goldie” in some versions of the tale). In what is now the area between the ladies boots and the kids department, a jealous boyfriend marched up and shot Patty while she performed. Rose, distraught from her loss, hanged herself on the second floor. Although they are long departed, many say that the women still wander the building, seeking consolation for their troubled ends.

Numerous employees have claimed strange experiences through the years, especially a nauseating sense of trepidation when going up the stairs. Lights notoriously flicker. One woman noted how, upstairs, she and others had seen a “lady in purple” out of the corners of their eyes. They described the woman wearing a “nice purple outfit” 100 years out of style. When they turned for a better look, she was gone.

Another employee said that several people had often walked upstairs and “felt something go by you.” Some time ago, one girl even claimed to have been pushed down the stairs. She said she felt something cold like a breeze and then hands on her back. The next thing she knew, she was at the bottom of the stairs with bruises and several sets of scratches. 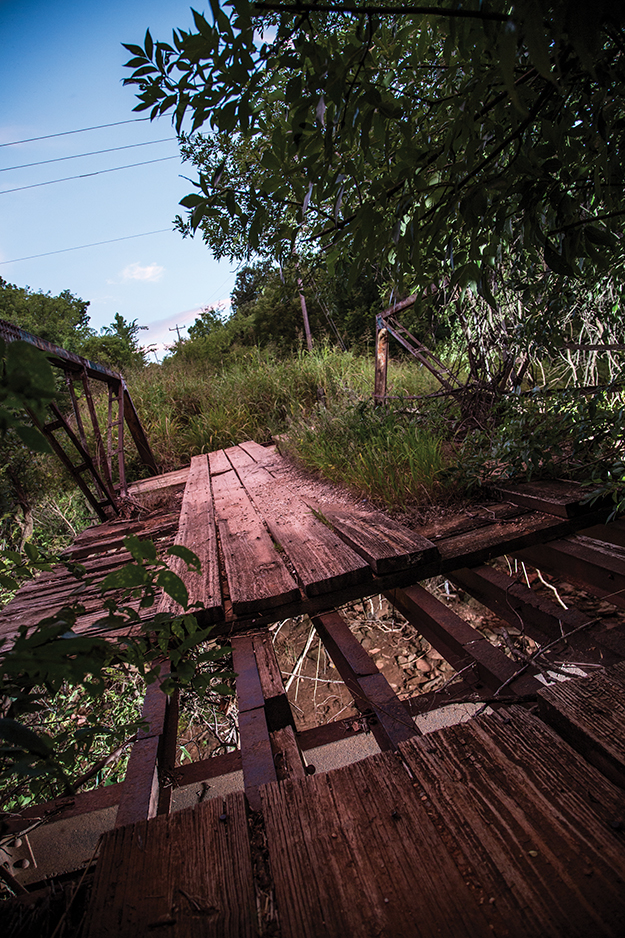 Once people begin sharing ghost stories about town, another one always seems to pop up. Oklahoma City even has its own version of the “Crybaby Bridge” urban legend that is ubiquitous across the nation. The story goes that a young mother and her baby were driving in a storm when their car plunged through the seldom-used bridge at SE 134th and Air Depot. It was days before a policeman happened by to discover the wreck and the long-dead bodies. Supposedly, one can still hear the cries of the child wafting in the overgrowth below the broken wooden planks that remain there to this day.

A little farther south of that is another story not often shared: the Kitchen Lake Witch. Out in the newly refurbished state park is a stone chimney, all that remains of a house that burned down mysteriously with its patron inside. She was reputedly a witch, and it is said today that her spirit still roams the grounds of her old home. In vengeance for her death, she still starts fires to this day. People claim to see smoke coming from the chimney and to come across smoldering piles of ashes. They also say they have heard footsteps and felt scratches, although they cannot see anyone human. Few stick around to investigate, but even leaving can be a problem as cars notoriously fail to start near the field.

These stories might not be factual, but there’s no shortage of variations and similar tales, and it’s fun to consider. So happy Halloween … and be careful out there.

(Editor’s note: Jeff Provine is the founder of the OU Ghost Tour. His collections of local folklore include Campus Ghosts of Norman, Haunted Norman and, new in 2015, Haunted Guthrie, co-authored with Tanya McCoy.)