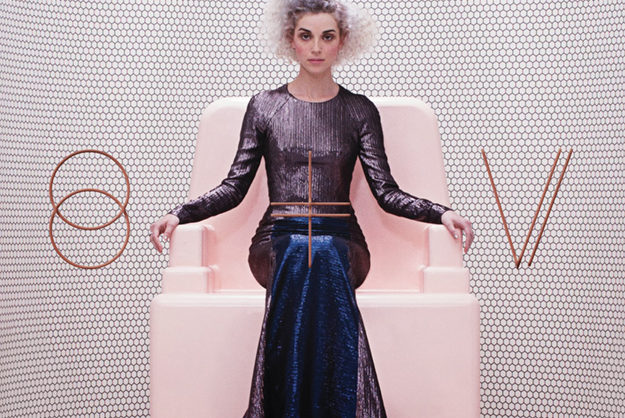 Once upon a time she was simply known as Annie Clark, but between then and now the native Tulsan joined the Polyphonic Spree, jammed with Sufjan Stevens and collaborated on an album with David Byrne – oh, and these days she goes by the name St. Vincent. Listeners who remember that musical moniker should have no trouble finding her latest album, also titled “St. Vincent,” and no trouble enjoying it either, assuming they’re fans of complex arrangements, lyrics with multifarious meanings and a chanteuse who can (and does) also play the piano, organ, guitar, bass guitar and occasionally a theremin. And if that sounds worrisomely like all posture and no pop, St. V. made it clear that the groove is paramount on this album, saying, “I wanted to make a party record you could play at a funeral.”

“St. Vincent” opens with “Rattlesnake” and closes with the evocatively titled “Severed Crossed Fingers” – devotees who have been keeping tabs on its prerelease press have had the opportunity to hear the tracks “Digital Witness,” “Prince Johnny” and “Birth in Reverse,” but with a release date of February 25 everyone can see how well their anticipation has been rewarded. Cross your fing- actually, maybe just purchase a copy instead.

P.S. – the Digital Witness Tour for this album doesn’t include the metro (boo!) but will pass through Tulsa (yay!) on March 15; check out cainsballroom.com.