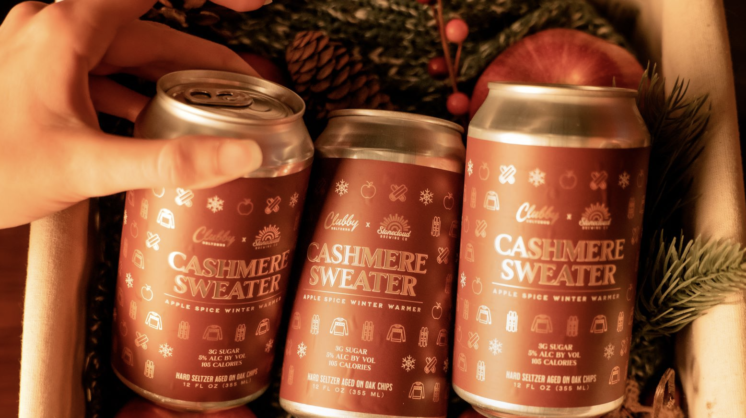 Clubby Hard Seltzers has collaborated with Stonecloud Brewing for the third seltzer in the Clubby line. Cashmere Sweater is a “winter warmer” style hard seltzer based on an original whiskey-apple cider cocktail the Clubby team wanted to mimic.

“They were aware of our seasonals and one-offs, so they approached us with this cocktail idea for a seasonal seltzer,” said Patrick Sullivan, VP of sales at Stonecloud. “Our lead brewer is very good at matching flavor components, so he went to work on it.”

Stonecloud eventually produced 1,200 cases of Cashmere Sweater—the name is a playful nod to the season—all of which have been sold or pre-sold, the latter meaning you can find them in liquor and retail stores until supplies run out.

“As of now, we aren’t scheduled to make another batch,” Sullivan said. “Stonecloud kept back 20 cases, and we sold through most of them the first weekend it was available.”

Cashmere Sweater delivers excellent winter flavors in what is clearly one of the best seltzers on the crowded market. Unlike some competitors, Stonecloud’s in-house seltzer base avoids the sulfurous finish that results from the brewing process.

“Sulfur is a natural component of the process,” Sullivan said. “We have several layers of filters and proprietary processes to remove the sulfur, so the seltzers finish clean.”

In addition to its base of fermented cane sugar, Stonecloud used American oak chips, vanilla, and maple to mimic the whiskey notes, and apple and winter spices to mimic the cider. The result is a very pleasant, seasonal, cidery beverage with low ABV and low calories. The unique flavor components make it a seltzer that makes sense for winter flavor-wise.

Cashmere Sweater is widely available in the metro, including George’s Liquor, 2nd Street Wine Co. in Edmond, and Crest stores.