Success in a Supperette - 405 Magazine 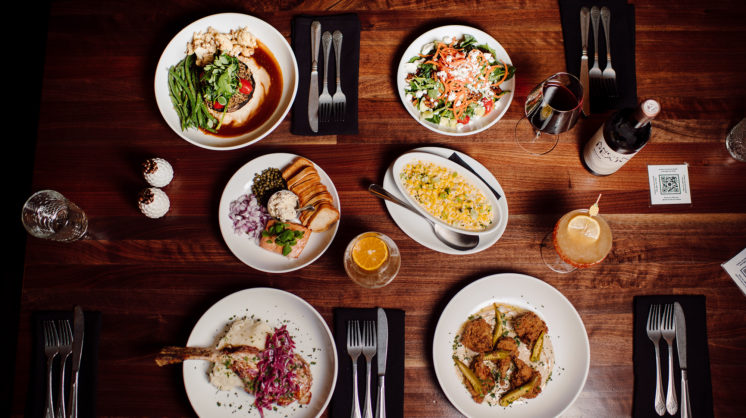 The Hamilton Supperette and Lounge should not have succeeded. That’s not a criticism, more an observation and summary of all the aggregated “conventional wisdom” lobbed in the direction of owners J. Mays and Chris Kana when they were first planning the northside, Okie-centric, booze-forward dinner joint.

“More than a few people said we’d never survive on the back end of a mall,” Mays said, “but the first time I stepped foot in the old S.J. Haggard space, I got goosebumps. It was that moment I knew we had found a special place.”

Yes, the space that is now The Hamilton used to be a men’s clothing store on the east side of Northpark Mall. Mays still has the picture of the first time he drove by and saw the iron gate and awning. He and Kana had been looking for a new space with what they called “character and charm.” Somehow, they looked at an old clothing store and visualized a warm, inviting, comfortable lounge in a space occupied by dressing rooms, old carpet, a wooden pergola and empty shelves.

“To be honest, I’m pretty sure Kana thought I was crazy – back of a mall and all that – but I kept emphasizing lots of parking, affordable rent, a great side of town and a ton of traffic,” Mays said.

For his part, Kana remembers the moment with much more colorful language. “I asked if he was ****ing insane. ‘Do you not want to have customers?’ Ultimately, though, I realized we had a good following at Cafe 7 who would trust us, we were going to turn it into a cool space, and we’d serve great food and cocktails.”

Stephanie Morrical Miller was an original partner, too, but she was busy with the downtown Cafe 7 when The Hamilton debuted in August 2019. After the tragic death of Chef Michael Paske, she assumed the role of executive chef in April 2020, as the effects of COVID were just rolling over the state. Miller brings the perfect resume to the kitchen at The Hamilton. She’s a master of comfort food who is also very capable with more refined dishes, and she’s a stellar baker. For a small kitchen with a small staff, the versatility is incredibly important.

The Hamilton’s food is Okie-centric; there is really no other way to talk about it. Mays and Paske mapped out the early versions of the menu, and the direction was toward Oklahoma-inspired dishes right away.

“When we started planning the menu for The Hamilton, we wanted a few unique items paired with Oklahoma staples,” Mays said. “We knew we were going to have a more focused menu, so our decisions had to be specific. We started weighing our options and were choosing things like catfish, pork chops and steak. The progression just trended toward an Okie-centric menu, so that’s the direction we headed.”

Focused is a good word. Mays said guests still ask where “the rest of the menu” is. It’s a one-pager, which doesn’t always sit well in a world with 100 cereal choices on an aisle, but smaller menus are easier to execute. It’s math meets food. How many things can one kitchen do well?

In spite of the small size, Miller delivers a menu with options for every palate and restriction: vegetarian, vegan, gluten-free and, of course, Oklahoma omnivore. Both the portobello rockefeller and bruschetta cavatappi show the creativity and care The Hamilton takes with its vegetarian options. The dishes are hearty, flavorful and beautifully presented. The diner understands that other dietary preferences should be treated with the same respect and seriousness as carnivores receive.

The Okie-style dishes show up right away. Why The Quail Knot (Mays loves puns. Loves them!) is quail knots with cream gravy and pickled okra. It’s as if they built the dish with a handbook of Oklahoma favorites open at their elbows. Catfish is present, but in “scallop” form. The pork chop is one of the favorites, and it’s a brined, bone-in dive into a Sunday supper from Mays’ childhood, including whipped potatoes. So, yes, it’s comfort food, but Miller adds touches like red marmalade on the pork chop and orange gastrique on the quail. They were also our choice in 2020 for best mac ‘n’ cheese, and the dish only tastes better every time we revisit it. The house-made boursin cheese certainly helps.

The bar is a perfect blend of classic and specialty cocktails, wine list and beer. Again, the lists aren’t big, but there is somehow something for everyone, and the service at the bar is among the best in Oklahoma City. That will only improve this year when it expands the space to the right to include another bar and private dining-overflow space. The whiskey list – already at 150 bottles – will have room to grow.

Finally, Miller’s desserts are reason enough to frequent The Hamilton. There are more adult-y options, but you should start with the cookies: Channeling the team’s childhood favorites, she makes a rotating selection of freshly baked treats, served up with cold milk.