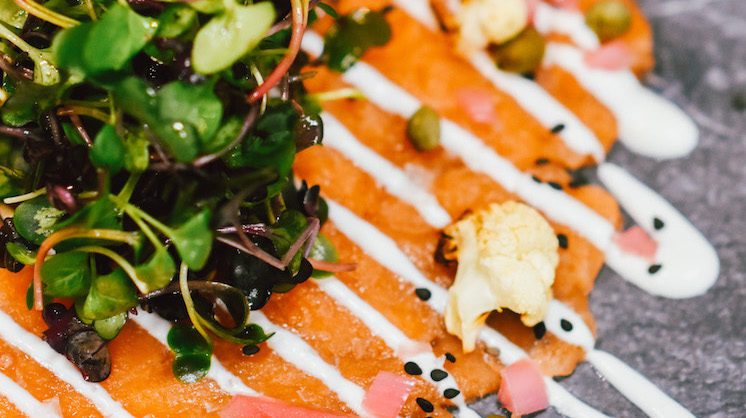 The NOUN Hotel opens in Norman this week, and it will feature an upscale casual restaurant, Supper Club, helmed by Executive Chef Greg Lopez. A New Jersey native, Lopez attended culinary school in Vermont and then spent the bulk of his culinary career on the West Coast, especially California’s Central and Northern Coast areas, with time spent in China and Portland, too.

“My approach is that simplicity is best,” Lopez said. “The presentation can be artful, and I strive for a beautiful presentation, but I believe in simple and flavorful when it comes to recipes. A 10-ingredient dish would be a huge recipe for me.”

Lopez’s signature dish will be bison chili, an appropriate choice for Oklahoma, especially with bison appearing on more and more menus in the metro. Lopez is using Benjamin Lee Bison out of Sayre, an extremely high-quality product from a family-owned ranching operation.

Supper Club will serve brunch, lunch and dinner — breakfast is continental style in the 92-room boutique hotel – and bison appears on all the menus. Lopez also loves seafood and fish, so Ora King salmon (including salmon carpaccio!) and striped bass will be house specialties. Lopez’s classical training shows up in his coq au vin and confit duck leg. Wagyu hanger steak and bison short ribs are sure to be Norman favorites.

Lopez has worked closely with NOUN’s food and beverage director Jason Ludlow, another hospitality professional with years of experience on the West Coast. “I was happy to see Jason and I were on the same page when we sat down to plan the menu,” Lopez said. “We both love wine, and we both agree that wine should enhance the culinary experience, and absent that, it should at least not interfere. They are meant to work together hand in hand.”

For his part, Ludlow said he focuses on global wine lists that feature wines designed to be paired with food. “I spent years building ‘hey wow’ wine lists until I realized the old blue-chip wines aren’t blue chip anymore,” Ludlow said. “Now I love to play around with wines that need to be brought back into the public’s attention or help people wake up to a new varietal.”

Ludlow’s cocktail list — he has the list at the upstairs ONE Bar too — will feature 35 to 40 cocktails on opening day, divided between brunch and main menus. “We build around fresh ingredients like freshly squeezed juices, herbs, organic bitters, etc.,” Ludlow said. “The whole idea is to keep things fresh and new.”

NOUN’s location midway between Campus Corner and Main Street will make it a game day favorite (and ONE Bar has plenty of televisions), but the overall elegance and ambience will make it an even more popular spot for date nights, special occasions and brunch with friends.