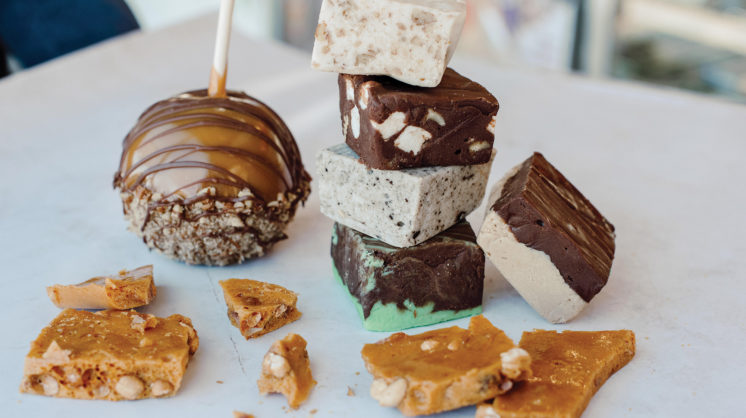 In the pantheon of Christmas candies, the candy cane stands above the rest for the honor of symbolizing the season – that elongated breath mint that does double duty as an ornament or window decoration. At the risk of over-generalizing, though, because everyone’s traditional Christmas is not the same, the best of the Christmas candies has always been fudge in its various forms.

Decades ago in Oklahoma – and mercifully, it’s not as common as it used to be – divinity would make an appearance in candy tins as the holiday season progressed, scattering its powdered sugar over the flotsam and jetsam of peanut brittle. The candy itself is simply powdered sugar, corn syrup and egg whites, which is to say sugar, sugar and egg whites, and that’s exactly what it tasted like. If it truly has disappeared from the pantheon, no one should mourn its passing. 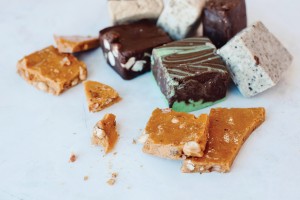 Fudge, however, remains delicious year-round, but still manages to be associated primarily with Christmas. Ashley and Scotty Jackson own both locations of Apple Tree Chocolates, and as Ashley explains it, they make one style of fudge with different flavors and inclusions: peanut butter, nuts, mint, etc. When making fudge on a scale like theirs, the process is much more complex than it was in my grandmother’s kitchen.

“One of the biggest factors in making fudge, and almost every other type of candy, is humidity levels,” she explains. “The humidity can mess with liquid content in fudges, toffees, caramels, etc., so we keep a running log and adjust accordingly with every batch.” 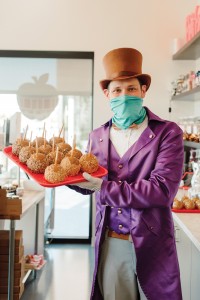 The result is a consistently delicious (and both beautiful and whimsical) selection of fudge behind the glass. And not just fudge; the Jacksons have their traditions, too.

“I grew up eating Mallomars and peppermint bark like they were going out of style,” Ashley says. “We do make a version of the Mallomar now, and we always carry peppermint bark at holiday time. I love smelling the peppermint in the kitchen when we start making holiday bark. Scotty always got a chocolate orange in his stocking, and he’s still pretty partial.”

Another Christmas favorite came in a striped box, and at our house, we knew that meant Turtles. Apple Tree makes a version of these with their own house-made caramel. The selection at both locations includes truffles, toffee, caramel apples and even gelato. The recipes are their own, but their move into the candy business was aided by family.

“My aunt and uncle own a chocolate shop in Louisiana,” Ashley says. “They gave us inspiration and assisted us in opening our first shop in Norman. Scotty spent a year before we opened creating new recipes, including our caramel recipe, from our house. Since then we have both taken courses in caramel, toffee and brittle making, as well as gourmet chocolate-making.” The better they get at creating these seasonal confections, the sweeter the holidays can be for all of us.