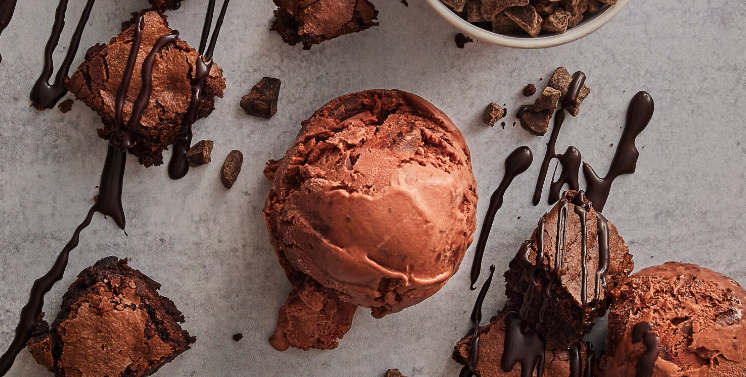 Angela Muir found the location she wanted for the new Boom Town Creamery in the second commercial real estate listing she checked. She messaged her husband Matt — a dentist — and he responded, “You need to learn to make ice cream.” It was mostly a joke, but she hadn’t yet perfected the recipes that populate her opening menu.

The Uptown 23rd location across the street from Ted’s Tacos and Big Truck Tacos was too large for her needs, but the owners agreed to subdivide the space. “I knew in my bones it was the right spot, and I was thrilled they agreed to work with me,” she said. “There is abundant parking, and I love the neighborhood and the businesses around me. The energy and growth are great.”

The Muirs moved to OKC from Kansas City, where she worked at Lilo’s Shaved Ice in 2020. Matt had accepted a position with a dental group, so the couple made the move with their four children and settled in Piedmont. She took a job as a designer for Hobby Lobby’s corporate office and put her art degree to work. She’s a creator by nature, so art and design — including custom wedding gowns — always motivate her.

“We went to a spot in KC that was all handmade ice cream: seasonal, delicious, creative,” she said. “I missed it, and I didn’t feel like I’d found anything comparable here, so I couldn’t shake the idea that I should start something.”

Muir found the building at 4 p.m. one afternoon, and the next morning she found an ad for an ice cream workshop in New York City two weeks later. “I had cookbooks and a home ice cream maker, so I’d been working on recipes, but I wanted to learn hands on from someone experienced.”

It just so happened that internationally famous dairy consultant Malcolm Stogo — creator of cookies and cream ice cream — was the instructor for the workshop. Muir spent two full days in a test kitchen with Stogo perfecting recipes and techniques.

In January this year, she signed the lease and finalized her branding and menu. All the ice cream is handmade. She offers two sorbets and two coconut-milk options for vegans and lactose intolerant guests. The overwhelming majority of the mix-ins are also made in house, including a component in what she believes will be the runaway bestseller: a salted caramel sauce that utilizes Guthrie-based Same Old Moses bourbon.

“Other than the cereal we buy for the Breakfast Milk-a-licious and the marshmallows, pretty much everything else is made in our kitchen,” she said.

Muir said Boom Town Creamery is starting with ice cream cones and scoops at first just to get up and running, but they’ll start adding sundaes, cookie sandwiches, and shakes as early as next week. The grand opening is Wednesday, June 22. Initial hours will be from noon to 11 p.m. Monday through Thursday, and noon to midnight Friday and Saturday. She’ll adjust hours as necessary.