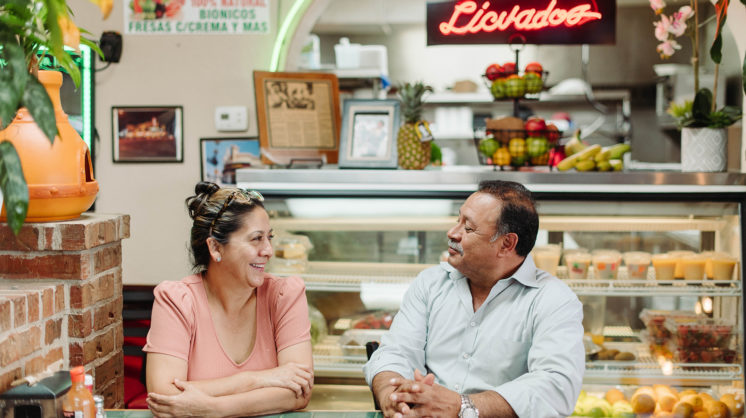 Sergio Gil came to Oklahoma on vacation in 1985. “She brought me,” he says, gesturing at Eva, his wife of 40 years and mother of their five children. “She brought me back in 1988, and my father-in-law said I should stay.” It was the second time Eva and her family helped Sergio decide where he would build a life. The first time was after they met in Long Beach, and he married her.

“He said, ‘You’re my oldest son. The business needs you.’ But I stayed,” Gil says. He laughs; he does so regularly and with sincerity, especially as he moves among the guests at OKC’s Tacos San Pedro, a business he and Eva established in 1992.

Both are originally from Mexico: Sergio from Michoacán, Eva from Mexicali. Sergio comes from a restaurant family; his grandmother had five taquerias in Mexico City in the 1950s, ’60s and ’70s. He lived with her for a few years as a boy, and he remembers going to the restaurants, so the smells and tastes of tacos, birria and flautas are the stuff of his childhood. And they are the heart of Tacos San Pedro’s menu.

“I wanted to introduce these flavors, this food, to Oklahoma City,” he says, moving his hands from his chest and opening his arms in a gesture of giving. Thirty years later, he and Eva are still serving up some of the best traditional Mexican food in Oklahoma City at their restaurant at 2301 SW 44th Street.

Over the years, many people have asked them why they didn’t expand. It’s sort of an obvious question, especially given that they were the first Mexican food restaurant in OKC that wasn’t Tex-Mex. Chelino’s, Nino’s and Cocina de Mino were here, but no one was serving southern Mexican cuisine.

The answer to the question came from Sergio’s grandmother. “She told me to focus on one,” Sergio says. “This is woman who had five, and she says take care of the one. Restaurants can kill you if you let them.”

Tacos San Pedro, like so many things, emerged from a failed search. After they arrived, the Gils looked for traditional Mexican food like they served in California. They couldn’t find it, so they started making it themselves. Still vacillating about staying or going, Sergio spoke to his father-in-law, who told him, “Stay. We need this food in Oklahoma.”

The process of getting ingredients was difficult right away. Of course, they made their own tortillas, and beef, pork and chicken were easy to come by. Grider, an old grocery store that eventually sold to Buy 4 Less, carried a small “ethnic” section, but guajillo chiles, cotija cheese, lengua and cabeza were impossible to find. Sergio drove a large van to California for supplies, and Kansas for specialty meats.

Tacos San Pedro eventually grew to a point such that specialty food suppliers started delivering. Sergio and Eva told other small Mexican food operators about the deliveries, and a co-op of sorts formed as people would place orders with the suppliers and pick them up at Tacos San Pedro. The Gils quite literally built Oklahoma City’s taqueria business by introducing new ingredients and helping their competitors succeed. It’s a civic awareness and hospitality-based way of being that are both refreshing and rare.

“We’ve been blessed,” Eva says. “We thank God for all this.”

“All this” includes five children, three of whom work in the restaurant, five grandchildren with a sixth on the way, and a life built on hard work, steadfastness and what Sergio calls “trust in the Lord.” He’s still serving the recipes he learned from his grandmother, even trying to replicate the red and green sauces she served at her taquerias. He said he’ll evaluate retirement in a few years, and they’re hopeful the kids will take over the business and continue the tradition.

Just over a mile from the Gils is La Esquina, on the corner of SW 29th Street and Agnew Avenue. It’s a corner store in name and design. (“La esquina” means “the corner” in Spanish.) Jorge Islas bought the former steakhouse in 1995, and opened Tortilleria la Azteca, renamed La Esquina 10 years ago. He had arrived in Oklahoma City from Ciudad Juarez, Mexico in 1979, and enrolled at Jackson Middle School. After finishing school, he worked for Goodyear Tire and Rubber while saving money to buy the store.

“In Mexico, it’s traditional to buy tortillas morning and evening so the family has fresh tortillas,” Islas says. “There was only a small tortilla business selling to Grider when I started, but it didn’t last long.”

Five years after he opened, Islas added tacos, including his delicious barbacoa and what some along SW 29th Street say are the best carnitas in the city. At the time, no one was serving traditional Mexican food on SW 29th Street. Tacos San Pedro and two panaderias (bakeries) were it, so Islas expanded to meet demand. His counter now features more than a dozen options, and he has a small bakery and grocery section. Islas has two sons who work in the store with him, and he, too, is not considering retirement. Business is still good, after all. He’s built something enduring on the corner, something important to the district. More than a corner store, La Esquina is a restaurant, grocer, lunch counter and gathering place.