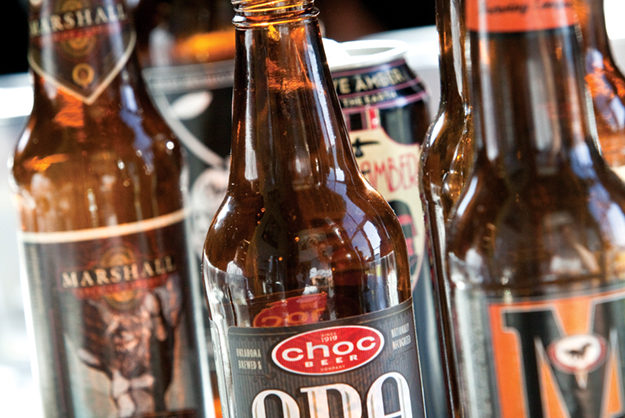 Local cuisine has become a popular concept in recent years, and the satiated diners at the area’s various locavore restaurants or purchasers of MIO groceries can attest that Oklahoma does well at producing food … but as the hottest days of the year approach, another question springs to mind: What about beer?

We decided to evaluate the state of Oklahoma brewing with a little help from some friends in the sporting industry: Alex Freeman (AF) is the RedHawks’ manager of media relations and broadcasting; Josh Evans (JE) is director of communications for the Barons; Matt Vaughan (MV) is court emcee for the Thunder (among other crowd-exhorting activities, you’ve seen him handing giant checks to the fans who have sunk those half-court shots) –  and all three were kind enough to visit the Slice House for an afternoon sampling.

For the tasting, we contacted seven statewide brewers and asked them for their most popular varieties (one apiece), then sampled them with the labels covered so any personal loyalties wouldn’t enter into the experience. Our objective was not to rank nor grade – there were no points assigned – but to get a taste of what the industry is like in 2013. With the help of these voices of the metro’s sports franchises, we’re happy to sound off about the greatest hits in Oklahoma beer.

Choc has the most venerable pedigree of the state’s breweries, insofar as the business, and some of the recipes, dates back to the Prichard (originally Piegari) family’s Prohibition-era restaurant. This more recent pale ale is a lovely light amber color with a creamy head and champagne-like streams of tiny bubbles after the pour. It has a crisp flavor with a strong hop presence that builds through the aftertaste.

AF That’s lighter than most pale ales I’ve had before in taste.
JE It kind of gets you at the end; there’s a delayed reaction, almost.
MV It has a hint of orange in it, when you smell. Got a hop in it; a kick to it.

Marshall Brewing Company, Tulsa – marshallbrewing.com
The story goes that the designation “India Pale Ale” came about because traditional English ale tended to spoil on long voyages to the tropics, so brewers developed recipes with elevated hop content, balanced out by different spices, that would survive being shipped to and served in India. This particular example of the breed was only shipped from Tulsa, and we were surprised by the malt levels – it’s not technically pale, more of a caramel color, with a bitter bite but without much tang on the nasal palate.

JE It is different; a little richer in its texture, in its flavor.
MV I wouldn’t call it my go-to, but I have friends who would drink this. Sharp is a good
word for it.

Huebert Brewing Company, OKC – huebertbrewing.com
The name is German for “Lawnmower,” which is nicely indicative of its targeted purpose: on a warm day, after you’ve worked up a sweat working outside, this is the sort of beer you’d reach for in the fridge. It’s a pale straw color with a quickly dispersing head and strong fragrance; we thought we detected lemon, cinnamon, banana and general floral odors. Its light, crisp flavor fades quickly off the tongue, refreshing without overwhelming.

JE It is light; it doesn’t linger on the palate.
AF The smell hits you when you’re lifting it up, but the taste doesn’t hit as hard.
MV It smells like a lemony, refreshing kind of beer. I could have three or four glasses of this at a backyard barbeque. What a great name for it.

Mustang Brewing Company, OKC – mustangbrewing.com
We didn’t know ahead of time that this particular label won gold medals at the 2011 and 2012 World Beer Championships, but even incognito there’s no mistaking it for a pilsner or a stout; the first comment during the pour was “That looks wheaty.” It’s rich in color and flavor thanks to the red Oklahoma wheat used in the brewing, and carries a bitter overtone with citrus aromas – and like many wheats, it welcomes a splash of added citrus.

AF I think once I added the lemon it enhanced it a little – adding lemon really brings it to life.
MV It’s pretty gentle; easy to drink.

By the way, Mustang operates out of the OKCity Brewing Cooperative, which is also home to Black Mesa and Anthem breweries. They sell via kegs, not bottles, but if you see either name on tap in a local restaurant, reward yourself with a tasting of your own.

Roughtail Brewing Company, OKC – roughtailbeer.com
Thick amber in color with a beige head, this concoction from brand-new brewer Roughtail comes with a chip on its shoulder: it’s described as “inspired by old-school American brawn,” and while that imagery and its name could describe the strong earthy, roasty flavor, it might just as easily refer to the potent 7.6 ABV (alcohol by volume) percentage. Coffee undertones and a long, long finish give a bit of extra character to a beer that’s not to be trifled with.

JE This has a lingering aftertaste, that’s nice.
AF I would say it’s the heartiest of what we’ve tried so far.

COOP Ale Works, OKC – coopaleworks.com
Glowing copper with a fluffy cream-colored head and a big, bitter slap of flavor up front leveled out by a sweeter malt undertone with hints of caramel. This might not have a universal appeal – one of our tasters referred to it as a manly dad beer – but it’s nicely assertive for those in the market for a strong-flavored brew. And if you didn’t see it poured, you’d never guess it was canned; that’s an accomplishment in itself.

JE Smooth going down; doesn’t overstay its welcome.
AF This one’s a little bolder, a little more flavorful – a little cleaner on the palate.

Battered Boar Brewing Company, Edmond – batteredboar.com
Battered Boar cranks out ambers and pale ales and a dynamite Hefeweizen, but part of its brewer’s heart belongs to flavored beverages. This hefty treat is too new to be the company’s overall bestseller, but owner Mike Sandefur touted it as their most popular currently, and it’s clearly a labor of love. After some initial trepidation about whether it was even conceivable to juggle the three titular elements, with unpleasant visions of Kahlua and cough syrup dancing in our heads, we quickly came to agree with his high estimation; it’s a genuinely impressive balancing act. The near-black color and dense head visually recall a Guinness, and while the chocolate is readily apparent in the flavor, there are hints of vanilla and coffee as well, with the cherry’s presence stronger in the nose than on the tongue. It’s complex; robust; a carefully crafted artisan beer.

Photographer Simon Hurst pointed out it’s not a session beer; it’s what you’d have if you’re sitting down with a book and fancy a pint. (He’s English; he can say things like that.)

While our tastes did not find universal concord, that’s to be expected, and we were favorably impressed with these selections as a whole … especially considering the relative youth of much of the industry. Choc is decades old, but Huebert is celebrating its 10th anniversary this year, Marshall and Mustang are turning five and the others are even younger. The real takeaway isn’t one specific recommendation, but the pleasant realization that Oklahomans can drink locally – whichever way their palates lean, whatever social situations they’re in. As Alex muses, “Overall, it’s a diverse array of beer; as someone who’s not from here (and is still very confused by all the liquor laws),
it’s nice to see that there are good options here.” That’s a truth worth toasting.

In addition to imparting an enhanced appreciation for the craftsmanship of Oklahoma brewers, this taste test shed a little light on a few other interesting tidbits:

• Despite the rigors of their schedules, of our three guests, only Matt drinks coffee, and he only started six months ago and is still in the “cup of sugar with a splash of coffee” phase.

• Speaking of schedules, Alex and Josh are both emphatic about the constancy of their workdays;
as Josh puts it, “There’s a misconception that now that the season’s over, we just go ‘Whoop!
We’re done!’ There’s no disappearing for the next three months for us. It’s slower [in the offseason] but there’s always stuff to do all 12 months.” Matt, who isn’t in management, does get a summer vacation of sorts. But he still works Thunder events during the offseason, and also keeps busy
as an event DJ.

• Demanding though the jobs may be, they certainly aren’t without reward – it’s how Matt met his wife, Kaylea – or satisfaction. Matt enthuses: “It’s fun to love the team and it’s fun to have a nice tangible example for the world about how fun this city is. I’m really happy to be a part of it.”
He’s not the only one, either, as according to Matt, “You know, [new Thunder center] Steven Adams was saying last night after the draft, ‘My whole family was hoping I would go to Oklahoma City.
Everyone in New Zealand was hoping that’s where I would land.’ I just thought – how great is that?
For someone across the world to say ‘I want my kid in Oklahoma City.’”

Fermenting grain and drinking the results is an old, old concept – historical records of the earliest civilizations show that even 5,500 years ago, people enjoyed knocking back a beer or two. Flash forward to 2013: a team of beverage experts and archaeologists from Chicago decided to make a batch of old-school brew based on an ancient poem called the “Hymn to Ninkasi,” using clay jars, period-available ingredients and even a manure fire for heating the concoction. The results, unfortunately, were undrinkably sour and vinegary to the modern palate. So if someone offers
you a “Sumerian-style” beer, hold out for an Oklahoma brew instead – sometimes newer is better.