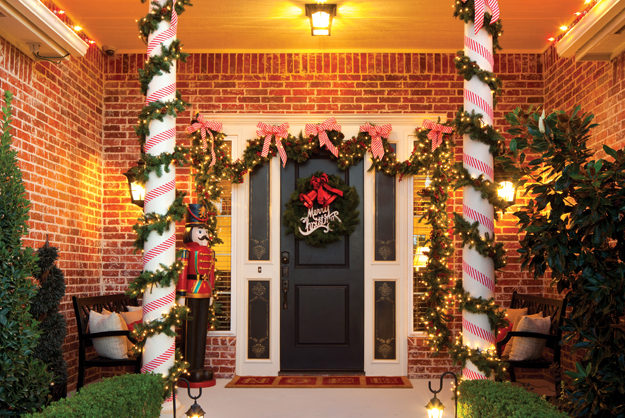 Jim Helberg and Steve Skidmore won’t be dining at their breakfast-nook table this Christmas. That would be a feat because the tabletop is currently an exploding volcano of colorful confections crawling up the stems of three miniature trees. It’s a Cherry Mash-up of Peppermint Patties, Kit Kats, Whoppers, hard-candy garlands and, to top it all off, gumdrop stars.

The trees’ whimsical “Junk Food” theme is Steve’s favorite of 20 tree motifs brightening 11 rooms in their west Norman home. A Christmas collector for years, Steve even scored ornaments in the shape of a shiny silver sandwich with a bite out of it and a pepperoni pizza slice.

The Junk Food tree is definitely the most fun to shop for. For Steve, it’s an homage to holiday indulgence.

“This time of year there’s no calories during the holidays, so just enjoy it,” he says.

Jim and Steve have been together for 21 years, and divide their time between Norman and their primary home in Los Angeles. Jim, whose advertising career has included top-level positions at Time Inc./Time-Warner, is now senior vice president of media strategy, integration and analytics at RPA, the largest ad firm headquartered in greater L.A., with clients including Honda and Acura.

He’s also a 1983 University of Oklahoma journalism graduate, and both he and Steve are staunch OU football fans, as attested to by signed photographs of university sports heroes and OU regalia on their walls. They attend every home game and Steve also follows OU women’s basketball. They also enjoy attending art and academic events at OU every year.

Steve’s Christmas tree themes are as varied as the pair’s interests and one tells a story about their values. Have no doubt, though: The trees are Steve’s creations.

“Jim puts about 12 ornaments on one tree,” he said.

Stepping through their home’s front door reveals the centerpiece wood-burning fireplace and, beside it, their premier nine-foot tree. Its theme is “Old World,” noted by a lettered wooden ornament. Red dominates the color scheme while variations of hatched, tartan and checkerboard ball ornaments evoke a Dickensian past.

Jim and Steve love to host family and friends – their backyard patio is café-style, with rows of bistro tables and chairs for the 40 to 75 guests they invite over for pre-game tailgate parties. The best reflection of that sensibility is the “Life” tree in the main guest bathroom. It’s adorned with placard ornaments bearing humorous and wise sayings such as, “A friend is one of the nicest things you can have, and one of the best things you can be.”

The tree that can’t seem to stop growing in scope is the “Sooner.” It’s a crimson-and-cream tribute with OU candy canes, mini-footballs and helmets. “We’ll need a 12-foot room for that eventually,” Steve says.

One guest room is accented by dual “Winter” trees. Robed in white and flocked, the seven-foot guardians flank the room’s king-size bed.

Traditional accents abound in all the home’s rooms. Red and green gingerbread men join hands across the top of an entryway door. A column of diminutive nutcracker soldiers stand at attention over another. A manger scene unfolds beside the “Twelve Days of Christmas” tree.

Christmas for Jim and Steve boils down to one more reason for happy get-togethers with family and friends. Their home is formal, but the pair insist upon “casual dress and even more casual attitudes,” as Jim notes.

As the beneficiary of Steve’s enthusiasm for creative Christmases, Jim appreciates the annual resurrection of traditions they’ve shared over the years.

“I would say it brings incredible memories of past Christmases,” he said. “Memories of family that aren’t around any more. And every year we make new memories with friends and families. It’s great.”

In November, Jim and Steve allowed Normanites and others to roam their approximately 3,000-square-foot home as part of the Assistance League of Norman’s annual Holiday Home Tour, which raises money to help the League provide an impressive array of philanthropic programs for the city’s residents:

Assault Survivor Kits – A care package of clothing and grooming supplies for survivors of rape and other violent assault who are leaving the Norman Rape Crisis Center.

Bears for Children – The League provides cuddly bears to children in crisis situations like auto accidents and house fires.

Care Kits – Supplies and toiletries for women and children residing in the Norman Women’s Shelter, and Independent Living students completing high school on their own.

Operation School Bell – New coats, shoes, pants and more for over 1,200 children in the Norman and Little Axe school systems each year.

For more information, contact the Assistance League at 321.9400 or visit norman.assistanceleague.org.