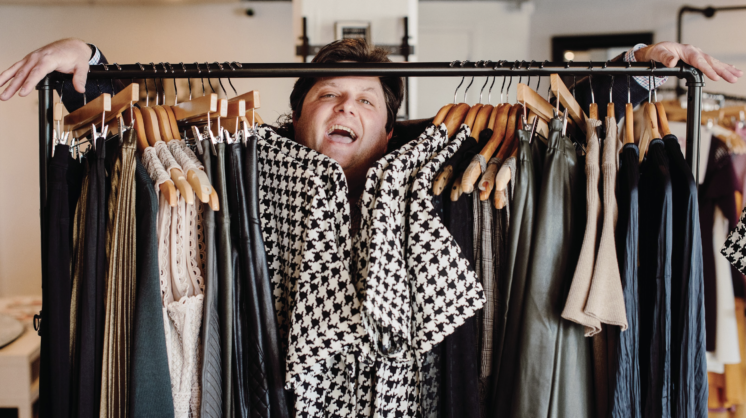 Speaking of the Conklin Crescent fountain pen, Mark Twain said in an endorsement: “I prefer it because it is a profanity saver; it cannot roll off the desk.” The famously irascible Twain – who else could think of saving up profanities? – is believed by many scholars of business to be the first celebrity endorser. That means that we can at least take comfort in knowing that influencers are not a new plague. In fact, like Twain, many endorse things they love, and they do so without guile or payment.

In the early ’00s, the growth of social media influencers began, and it didn’t take long for the industry to recognize the value of “regular people” who were evangelists for products they loved, as opposed to celebrities who required generous paychecks. For our “Best Influencers” we wanted to focus on people who attempt to influence the public, not from favored positions as media personalities or marketing professionals, but as people who just love something enough to want other people to love it, too. However, some professionals also are influencers, and their power is felt both in their industry and by consumers, so we decided to look at both.

The influential folk here are not meant to be a comprehensive list, but we do believe they represent the categories well – we follow their accounts, as do professionals in the industries they cover. We intentionally avoided self-proclaimed influencers who purchased followers; it’s organic growth only for us.

The influencer game has undergone some changes during COVID – especially the food, booze and entertainment categories – but they’re not going away. Businesses are learning to identify those who have actual influence, as measured by engagement, not just numbers, and wise business owners have learned to incorporate them as one prong in a marketing strategy.

We begin with influence in its purest form: Eddie Radosevich. The University of Oklahoma graduate was 2020’s Best Influencer in this magazine, thanks largely to his following on KRXO (The Franchise sports radio) and his philanthropic efforts in Horns Up For Peace, a group that seeks to bridge misunderstanding resulting from the misuse of Texas University’s “horns up” hand gesture. 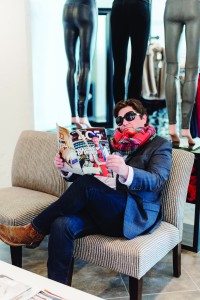 “Other influencers are important, but I don’t know how many are out here saving lives like we are with Horns Up For Peace,” Radosevich says.

Not one to be locked into categories, Radosevich earned a degree in journalism, and he’s serious about his influence on the radio. “I like the idea of mentioning a local restaurant and having people eat there,” he says. “I’m still getting used to it, but I really do intend to be taken seriously as a journalist, and I guess now, as an influencer.”

Originally a supper club among friends, Take A Bite OKC has morphed into the best food Instagram in the city. Phi Nguyen is the driver, but she shares the frame with her supper club comrades. A combination of great photography, timeliness, genuine engagement with locavores and a commitment to posters spending their own money in bars and restaurants makes this Instagram account a “must follow.” 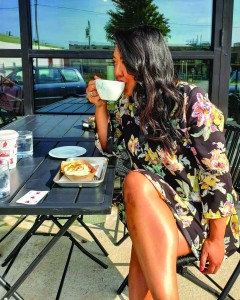 “The goal was to share food and cocktails with my friends, and over the past two years, owners and managers have reached out to try to get us to be a part of openings or promotions,” Nguyen says. “I love that, but I also want the account to remain true to the kinds of food my friends and I eat.”

Kayla Coffee and Anna Farha are the Localites, two consumers of local culture committed to showcasing all that is great about OKC. They have a podcast and an Instagram account, and they’re not constrained to one genre; they cover food, drink, retail, business openings, events, etc., with wit, insight and access.

Kris and Kate Kettner (married, not siblings) started Barrels and Mash as a blog and then added an Instagram account. They met when Kris worked at Joe’s Place Liquor in Norman, and they both possess a deep and broad understanding of beer and whiskey, including cocktails. Self-taught, they learned from reading, tasting and booze tourism (e.g., The Bourbon Trail).

Born in Los Angeles and raised in Miami (the real one), Genesis Brown showcases off-the-beaten-path eateries around the metro – especially the Latin/Hispanic foods her Cuban mother taught her to appreciate and she learned to love growing up in south Florida.

TheSpyFM.com program director Ferris O’Brien has worked for three decades to help Oklahoma listen better – or, at least, listen to better music. Through various forms, from a low-power Stillwater station in the 1990s through The Spy’s current partnership with KOSU-FM, O’Brien continues his efforts to illuminate great music, whether it was made in south London or south Oklahoma City.

Through his social media, O’Brien helps promote not just the music on his station, but his world view. He believes in the sanctity of @freemomhugs, the gospel of Morrissey and the need to congregate in music venues – but only after COVID-19 is dispatched to the annals of history.

“I think we all want to make some sort of impact, and hopefully that helps generate interest in who or what we are,” O’Brien says.

Public Enemy’s Chuck D praised rapper Jabee as being part of a long lineage of Oklahoma lyricists who speak to society’s ills with unflinching honesty, telling the Oklahoma Gazette in 2016 that, “The tie between Woody Guthrie and Jabee is not as distant as people think.” 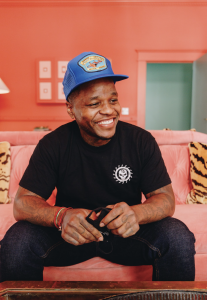 While he enjoys the plaudits of great hip-hop minds including Chuck D and Run the Jewels, Jabee is more than a man of his word(s). He is a check on power in Oklahoma, a fierce defender of people with no voice. When he staged a one-person show that chronicled his time as a homeless preteen, the loss of his brother to gun violence and his rise as a unique voice in midwestern hip-hop, OKC Mayor David Holt praised Jabee on Twitter.

“I post what I believe and what’s true to me, I’m not always right and people don’t always agree with me or understand, but I think that’s what makes it real though, and honest,” Jabee says. “Hip-hop culture, and my community, are the essence of my posts. The best part is it’s connected me to people who may never hear a song of mine but want to know more about why I say the things I say.”

Aubrey Ballard has a kooky yet sophisticated eye. She’s equal parts Anna Wintour and Grey Gardens, in the best possible way. You might find her rocking some granny-chic, vintage couture or in a little number she picked up at Goodwill. Regardless, she’ll look smashing and will inspire you to quit being so serious and practical in your clothing choices, for goodness’ sake! Oversized tie-dyed Bermuda short? Yes. Four or five floral patterns together? OF COURSE! Also refreshing: She feels no need to smile. She gazes straight into the camera, calm-eyed and glossy. Ballard spent a decade in the fashion industry, a natural path for her after falling deeply in love with fashion at age 13 thanks to a stack of old W Magazines at a garage sale. With a degree in fashion design and a decade working in Dallas and L.A. as a trend forecaster, wardrobe stylist and e-commerce merchandiser, she’s the real deal. She’s also a purveyor of vintage and pre-owned fine jewelry (@thedandystone) and her eye for jewels is as sharp as you’d imagine. Find her on Instagram, Pinterest or on the plain old internet. 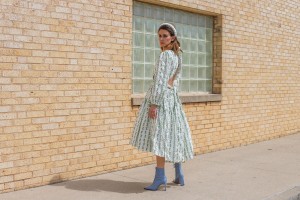 She’s like the super-cute next-door neighbor you wish you had. Ally Noriega is genuine and approachable, and will help you navigate trends and find the best sales. She’s not shy about sharing the “real” side of being a new mom, and is refreshingly self-deprecating. Says she, “This blog is my visual style story that showcases what to wear and where to wear it. The whimsical name comes from my nickname as a child. My goal is to expose readers to unique and accessible fashion ideas, dreamy places and new beauty products to help inspire them on their own style journeys.”

Following Whoorl is calming for me. She, her terrific bangs and her nearly 23,000 Instagram followers are all about clean, everyday beauty – and lately she’s been putting some politics out there. Ask her what she thinks of Victory Church Tulsa’s recent multi-thousand, maskless super-spreader gathering, or just look at her ‘Insanity’ Instagram story button. How she describes herself: “I’m Sarah – a wife, mother, writer and lover of beauty, inside and out. I recently relocated with my husband, 14-year-old son and 10-year-old daughter from the beaches of Southern California to Oklahoma, where, indeed, the wind comes sweeping down the plain.” Bonus points: she’s been featured in a Pantene shampoo commercial.

Nicole Poole is a chalk bomber, sound painter, world traveler and the recipient of the 2020 Inspirational Influencer Paseo Arts Award. Follow her on Instagram, or even better, stroll around OKC’s Edgemere Park to see her work IRL. She’s the daughter of venerable Oklahoma artist O. Gail Poole, who inspired generations of Oklahoma artists with his talent and humor. She described her shenanigans to a local newspaper recently: “Ah, it’s just joy. It’s that delightful disruption that just makes me so happy. That’s my love language.”

If it’s the arts, she’s there. Among other feats, in 2003 Scaramucci and her buddy Cacky Poarch arguably resurrected deadCenter Film Festival and set it on its path to become the globally respected, rollicking showcase it is today. She’s been lauded by the Norman Arts Council for her support of the arts community, currently serves as vice president of Oklahoma Contemporary and is an independent movie producer. Perhaps most spectacularly, she founded one of the best parties in the 405: the Glitter Ball, which benefits deadCenter and also celebrates her birthday. That’s pure genius! Follow her in any way that isn’t creepy, and your cultural wellbeing will immediately improve.

Stumble across any scenic view in the state and you’re bound to have walked in the path of local travel and lifestyle influencer, Amanda Martin. A self-described dog lady and coffee snob, Martin started becoming an influencer by writing a blog about making a home in Oklahoma City after college. Since then, her captivating photos and engaging content have featured foreign and domestic parts of the world, all while representing Oklahoma with an infectious smile on her Instagram page. 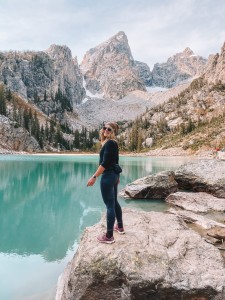 “Writing my blog eight years ago, I made it to show people new places. I felt it was cool to experience something different,” Martin says. “I’ve traveled all over since then, but I’m back where it all started, and it’s sparked some ideas on local, safe places to travel for special day trips.”

“No Child Left Inside” is the mantra held by the Little Family Adventure, a travel and family-oriented Instagram by Nicky Omohundro. As a local mother of three, Omohundro’s mission is to inspire families to be active together by experiencing new adventures and traveling the world.

Steve and Ann Teget are the minds behind Postcard Jar – an inspirational travel blog telling authentic stories while exploring vast areas of the world with an Oklahoma eye. Their travel tips and insights into health and wellness makes this Instagram follow a must.