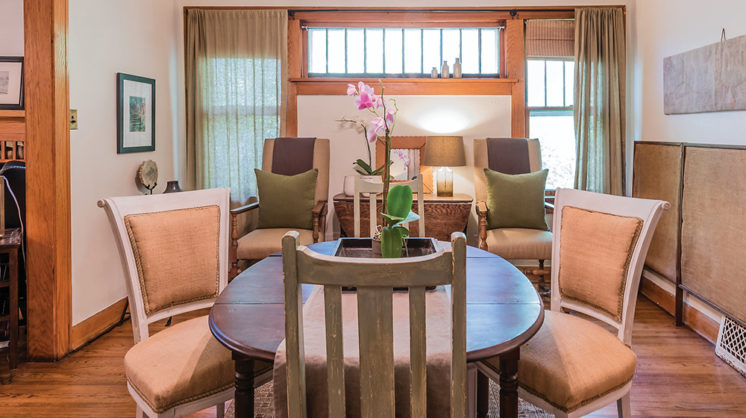 Daniel Billingsley’s beautiful, circa 1922 apartment smells fantastic. He’s inclined to burn one of two candles, either Cire Trudon in Ernesto or Diptyque’s Essence of John Galliano. He couldn’t have chosen better. He’s washed the space in a scent that complements the visual tableau he’s created to a T. The place smells like it looks: woody, deep, civilized and calming. All of these attributes perfectly suit Billingsley, himself supremely urbane, articulate, well-traveled and genteel while still retaining the warmth of his staunchly Midwestern upbringing.

He serves our state’s nonprofit community, and is the vice president of external affairs for the Oklahoma Center for Nonprofits. He is committed to being of service to others. “I was raised on the John Wesley ideal of doing all the good that you can, by all the means that you can, in all the ways that you can, for all of the people you can,” he says. “I believe in the work of nonprofits and all of their volunteers who get up every day and say, ‘I’m not in it for me, I’m in it for my community.’”

Billingsley’s flat is a second-floor walk-up in Oklahoma City’s gracious Heritage Hills neighborhood, and it’s quite a score, almost as rare as a unicorn. “I moved in July 11, 2016; I found it through a friend of a friend,” he says. “I’ve lived in cities all around the country, and when I was in Chicago, I lived in a high-rise, but had always wanted to live in one of those beautiful pre-war buildings in an historic neighborhood. They are not plentiful, but there are several buildings like this scattered through the neighborhood. They were originally often used by legislators from out of town who worked here during the week.”

The woodwork is original, as are the light fixtures, although thankfully those have been rewired. The original floors have been gently refinished, and the kitchen cabinetry is unchanged. “You can tell because modern dishes are too wide to fit in them,” Billingsley says.

His approach to styling the place is an exercise in restraint. The palette used throughout is of warm browns, neutral and cool grays veering almost to smoky purples … natural hues. “I spend a great deal of my free time shopping, trying out restaurants and traveling,” he says. “I have my regular haunts for antiques and home décor. My advice is to always edit, edit, edit; I have to be very careful in this small a space. I tend to be very picky about things – I may buy a piece, try it for a month or two, only to then give it away. A person develops style in part by trial and error.”

More sage decorative advice from Billingsley? “For key pieces, buy once and buy high quality. Read design blogs. I read them constantly because early on, I discovered that in design, it is actually very helpful to learn from others.” 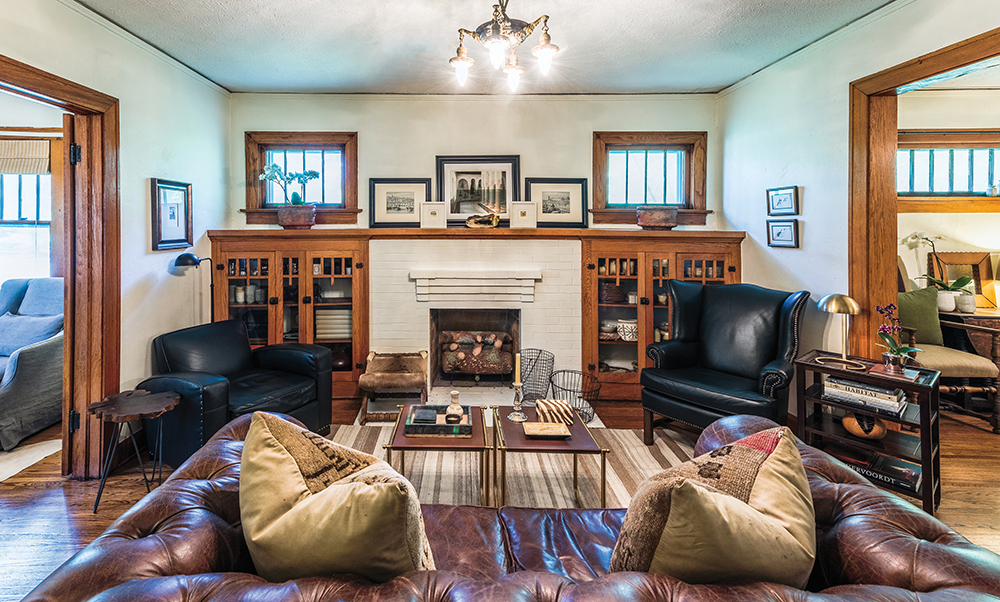 In the living room, a vast collection of Frankoma pottery that had belonged to Billingsley’s grandmother fills one side of the built-in cabinetry. “I already owned the couch and the main pieces when I moved in,” he says. “My style had already begun to evolve in this direction.” A rug from Williams Sonoma Home harmonizes with a collection of prints and woodcuts from Billingsley’s extensive travels, gathered atop the mantel. A freeform-shaped side table with iron legs was sourced at Target, while the deer-hide stool was a find at local market event Industry Flea. “I got it for $20. Another tip? Wait until the end of the day to shop at events!” The small, preserved alligator head on the mantel is from Interior Gilt. Billingsley has no television, and while he does own a microwave, he has never plugged it in. He explains, “If I have a TV, I just sit and watch it. Now, if I want to watch something, I download it and watch it on the computer.” 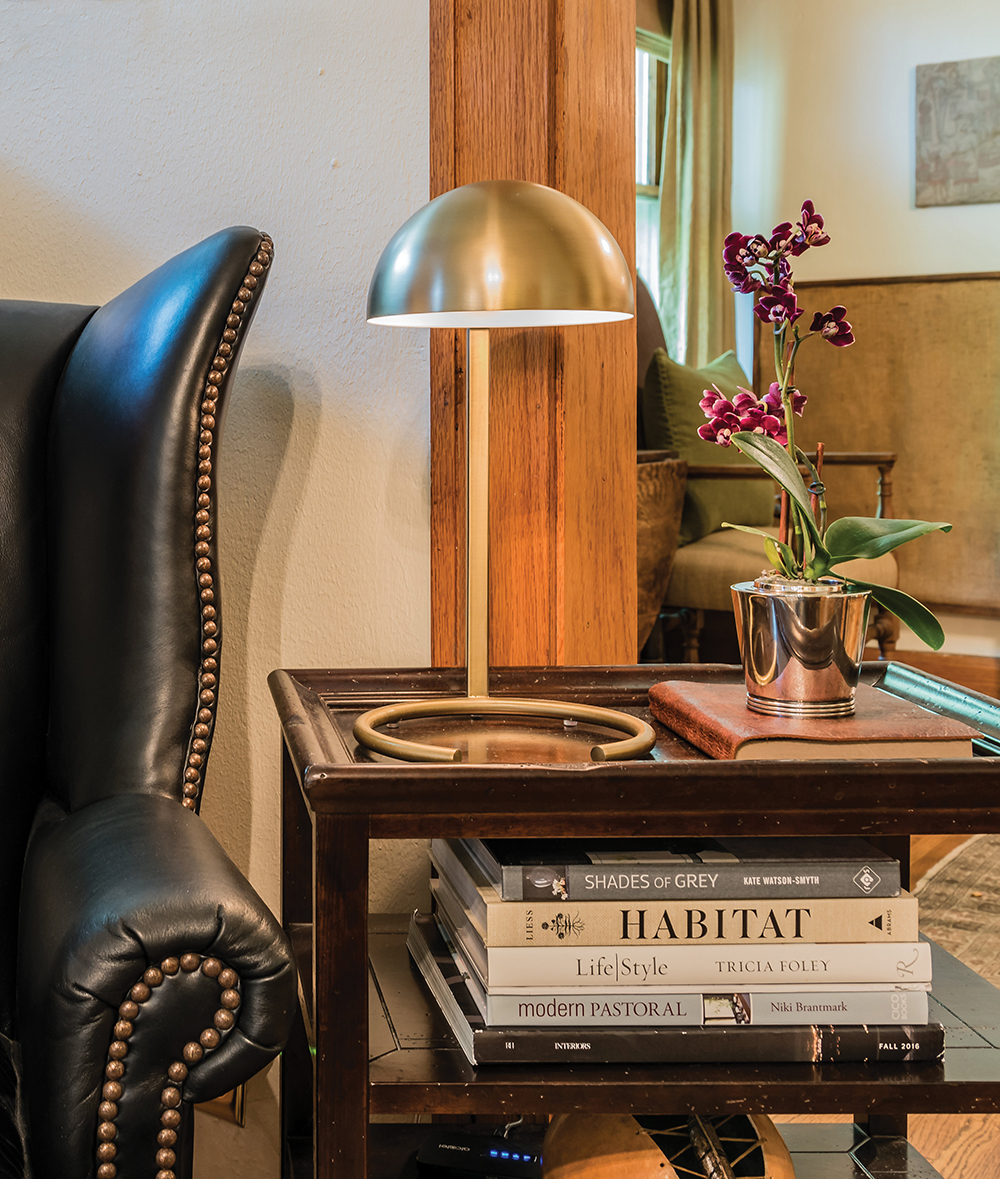 Mixing textures is one of Billingsley’s fortes, seen here in the brass studs, soft leather and a contemporary brushed-brass lamp, leather-bound antique book and orchid atop a vintage side table. A non-stop editor of home décor, Billingsley regularly haunts Embellishments in Tulsa; in Oklahoma City he checks in at Sabi, Antique Avenue, Interior Gilt and The Rink; and farther north in Kansas City, he heads for Sid and Company, Parrin & Co. Antiques and George Terbovich Design. 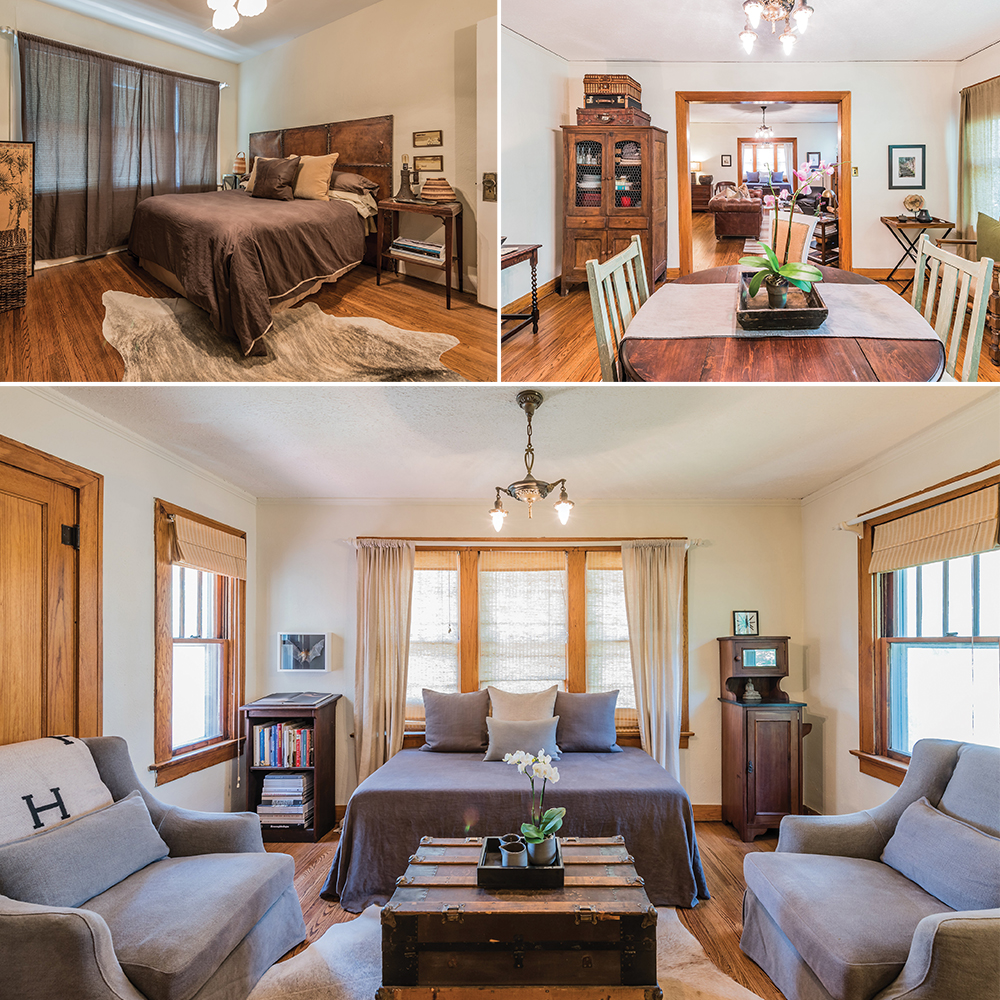 • One of Billingsley’s most recent finds, a beautiful, multi-panel, antique Japanese screen from Sabi in Oklahoma City anchors one corner of the room. The massive leather headboard is from The Raven in Santa Fe, and the bedding is a combination of West Elm and Parachute. Bedside photos are of Billingsley’s father racing his Austin-Healey Sprite. The sculptural Edison bulb lamp is a find from Rust & Rot, 1013 NW 36th, and is fashioned from an antique train jack.

• In the dining room, Billingsley’s great-great-great grandmother’s pie safe now houses serving pieces and other necessities. The room is perfectly balanced, but not symmetrical, with a foldaway table on one side and a spool-legged piece on the other. Slightly rustic fabrics on two of the dining chairs and the bench mimic that of the screen placed against the wall. Above, an original chandelier shines.

•  Soothing, sophisticated neutrals fill the Billingsley flat. Here in the guest room, family antiques cohabitate happily with a high-low mix of furnishings and accessories. The large trunk in the center of the room comes from Billingsley’s mother’s side of the family. An industrial cart holds beverages now, after being rescued from a dumpster. A heathery gray French linen coverlet matches the upholstery on the two cushy chairs, one of which is topped with a sumptuous Hermes throw. Quirky elements, such as the preserved, framed tarantula and taxidermied bat, can be found here and there throughout the space. Atop the trunk is a cache of ceramics from Jayson Home, mixed with a tray and tables from Target.