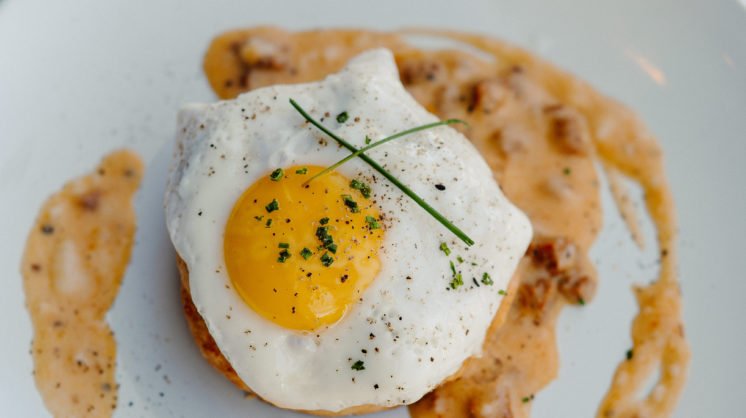 Cafe Evoke exists in its current form partly because of a broken promise. Well, truthfully, the promise was broken only after a discussion, and perhaps permission to break the promise negates the original covenant. “Robert (Black) promised me we’d never own a restaurant,” Lori Dickinson Black said. “He was consulting on restaurant projects, and I had been consulting for non-profits with my company Springboard while he was still in hospitality. I wasn’t really interested in running a restaurant, thus the promise.”

Robert Black had left A Good Egg Dining Group and was taking on consulting jobs for various restaurants around the metro, but he wasn’t thinking in terms of ownership either. The couple were already friends with the Evoke founders Jason and Jenni Duncan. Dickinson Black had been a customer since 2012, and the conversation that led to the decision to purchase the space at 103 S. Broadway in Edmond came up “organically.”

“We had a conversation about it, and even though there was the promise, it seemed a great opportunity since we were buying a coffee shop with an excellent reputation and excellent coffee program,” she said. “It’s also an amazing space.”

Since opening a few months before the pandemic began, the Blacks have worked to improve the space — including several of Dickinson Black’s paintings, many of which she completed during 2020-21. They also pulled in longtime friend Chef Chris McCabe to head up a food overhaul.

“Most coffee shops have okay food, if any,” Dickinson Black said, “and if you go out for good food, you can’t usually get great coffee. We wanted to create a space that features both, and we already had the coffee component in place.”

Evoke pours Middle State Coffee from Denver, which was the choice of the Duncans from the beginning. Dickinson Black said they kept the brand because of the high quality, excellent taste and the fact that there was no place else in OKC to find it. Middle State makes very small batch coffees, so distribution is very limited.

“We work with local quite a bit,” she said, “and when we run low on Middle State, I call Clarity, Sincerely or Prelude to supplement until a new order comes in. We also currently purchase some of our baked goods — like the croissant for the breakfast sandwich — from Ganache Patisserie.”

Evoke also works with Rishi Tea, which partly explains why its London Fog is one of the best in the city. Dickinson Black said it also includes a house-made vanilla syrup to complement the bergamot oil focus of the tea. The London Fog manages to be rich and creamy with a stiff backbone of black tea, spice and earthy notes.

McCabe has applied himself to crafting a menu that is simple, flavorful and easy to serve in a coffee shop environment. He’s taken on some of the baking as well, including the cinnamon rolls on weekends, and a relatively new creation: the cruffin. The marriage of a croissant and a muffin,the cruffin is dense, flaky, bready and delicious. The ingredients will vary depending on season and ingredients, and each features a house-made ganache or pastry cream to intensify the flavors and soften the texture.

The breakfast menu features McCabe’s baking skills in the biscuit with chorizo gravy, too. The biscuit doesn’t need gravy; it would work beautifully with honey or jam and butter. The chorizo gravy is a nice touch, though, with respectable but not intense heat levels. His real chef skills show most prominently on the scrambled eggs with hot pastrami, primarily because the art of cooking perfect eggs is too rare. McCabe nails it, and the addition of rye toast makes it impossible not to build a proper breakfast sandwich. Pro tip: Ask for a slice of cheese to help in your sandwich construction.

For healthier eaters, options abound — especially avocado toast, overnight oats, a portobello sandwich (on the lunch menu), a veggie egg scramble and a turkey-avocado sandwich. The menu is pared down to try to appeal to as many dietary types as possible without sacrificing quality or taste, a process that was applied to the entire operation in 2020.

“COVID forced us to cut everything that wasn’t necessary to survive the pandemic,” Dickinson Black said. “The menu is focused and easy to execute. The hours make sense now, too. The old 7 a.m. to 7 p.m. never really made sense, as we were a glorified library after 3 p.m.”

The space is one of the big appeals of Evoke, at the level of a quick lunch, a business meeting in the morning, studying, meeting friends or, as Dickinson Black has learned in the past year, as a meeting space for up to 50 people. “We’ve catered a bunch of events in the space, and we really want to be a community space. We’re doing live music, buffet meals for catering and we’ll even allow outside food in if that’s what the customer wants.”

The vision of creating a space with great coffee and great food has been realized in downtown Edmond, and if Dickinson Black gets her wish, it will also be a community space for private events, live music and community conversations.