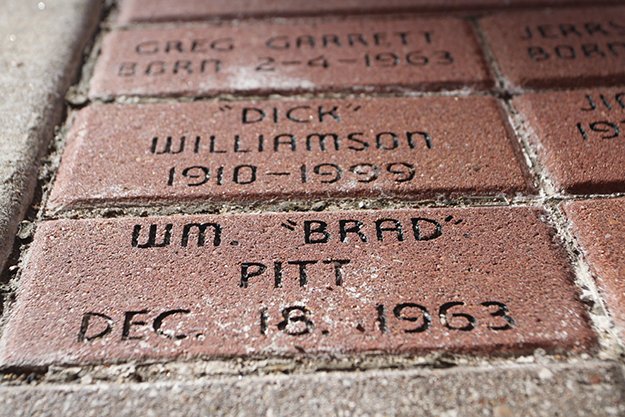 Inked onto the toned upper left arm of the most beautiful woman in the world are seven lines of letters and numbers. They are latitudinal and longitudinal coordinates of places in Cambodia, Vietnam, Ethiopia, Namibia and two identical listings for a city on the French Riviera, denoting the birthplaces of each of her children.
The newest line, the seventh, reads: N 35° 19' 44" W 96° 55' 26"

The arm belongs to Angelina Jolie; the new coordinates are to the birthplace to her paramour, fourth-generation Oklahoman William Bradley Pitt, born in Shawnee 50 years ago this month, on December 18, 1963.

Shawnee looms large in the history of the Pitt family. His great-grandmother, Una Coker, was part of the 1920 high school diploma program at Oklahoma Baptist University. His father, William Alvin Pitt, grew up in Shawnee, was president of the Shawnee High School Class of 1959 and met his wife-to-be, Jane Etta Hillhouse, in town, while both were students at Oklahoma Baptist. They married in 1962, at the age of 21.

Their eldest child, William Bradley Pitt, drew his first breath at the ACH Hospital in downtown Shawnee the following year. The young family left for Tulsa in 1964, and soon settled in Springfield, Missouri. But they returned to Shawnee every year for Thanksgiving, and for a week in the summer to visit family, including William Alvin Pitt’s mother, Betty Russell, who still lives in Shawnee. Fifty years later, there is little indication that one of the most recognizable men in the world is from this town of 30,000.

Inside Santa Fe Depot, sprawling home of the Pottawatomie County Historical Museum, there is no mention of Brad Pitt: Golden Globe winner, four-time Academy Award nominee and philanthropist, whose two-syllable name has become shorthand for a kind of effortless hunkiness, and spawned a dozen ancillary meanings in the international urban dictionary.

Do they get people who come to the museum wanting to see items having to do with Brad Pitt?

“Those that know will ask. I think I saw something once that had his picture on it, but I can’t remember where it is.”
So there’s nothing in town about Brad Pitt?
“Well, there is a brick. In front of the old hospital.”

The place is downtown, on East 9th Street, set back from the brick-paved streets, located between the old movie palaces – the Hornbeck and the Ritz – and next to the grand nine-story Aldridge, which has been converted to apartments for residents 62 and older. Out front, installed between the sidewalk and the curb, are a few dozen bricks paying tribute to residents and businesses. In the bottom left, three rows below the big stone for Wall’s Bargain Center, is a brick, 4 inches by 8 inches, memorializing:

As I crouch down to photograph the walkway, a woman coming out of the senior center with a cigarette and lanyard calls out: “Are you OK?”

She looked over and shrugged, leading me to believe that the Brad Pitt brick was not a tourist draw along the lines of stars on the Hollywood Walk of Fame.

Back in Hollywood, reminiscing about the role as cowboy hitchhiker J.D. in 1991’s “Thelma and Louise,” Brad Pitt recounted how his background played a part in the performance that launched his career: “It was a character who was from my area, pretty much, so I got to use my accent there, which helped.”

In Shawnee, you could drive by the Louise Fluke monument at Centennial Park, down Wanda Jackson Boulevard and past the Gordon Cooper Technology Center. Don’t be fooled by the sign for Tangles Salon on North Harrison, next to B & M Firearms and Ammo, which looks like it might have an image of a young Brad Pitt on its sign. Upon closer inspection, it turns out to be a clip-arty ’80s-era blond man with blow-dried hair.

It does not matter that his hometown does little to acknowledge its most famous native. Hollywood’s reigning golden couple carries with them, tattooed onto her arm and infused into his DNA, a bit of Shawnee.