The Drake’s Waves of Flavor - 405 Magazine 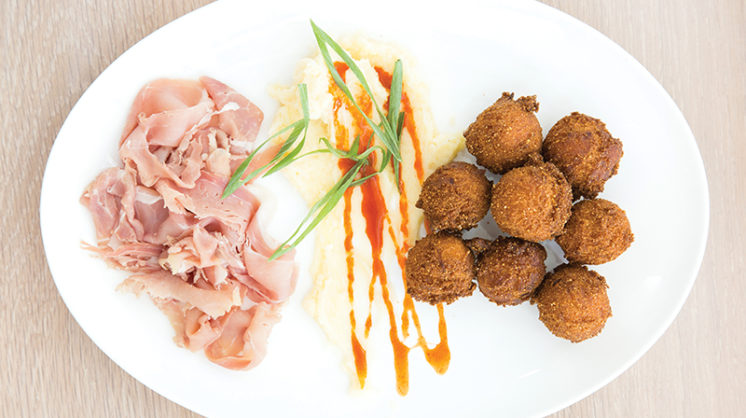 Oklahoma City is about a thousand miles from the Atlantic Ocean, give or take. Between
here and the Pacific lie more than 1,100 miles, and it’s 450 to the Gulf. That landlocked status means the opening of a new seafood restaurant here is more of an occasion than it might be in Maine or Florida or San Francisco. On the other hand, the advent of a restaurant like The Drake would be cause for celebration anywhere – the newest venture from A Good Egg
Dining Group is a must-voyage.

The full name of the restaurant (by the way, it’s named for Sir Francis, not the luxury hotel) is “The Drake Seafood • Oysterette,” which should give diners a pretty clear indication about its focus – while you could make a full meal here out of solely land-based tastes, it represents an outstanding opportunity to go exploring for unusual-to-OKC flavors from the ocean. 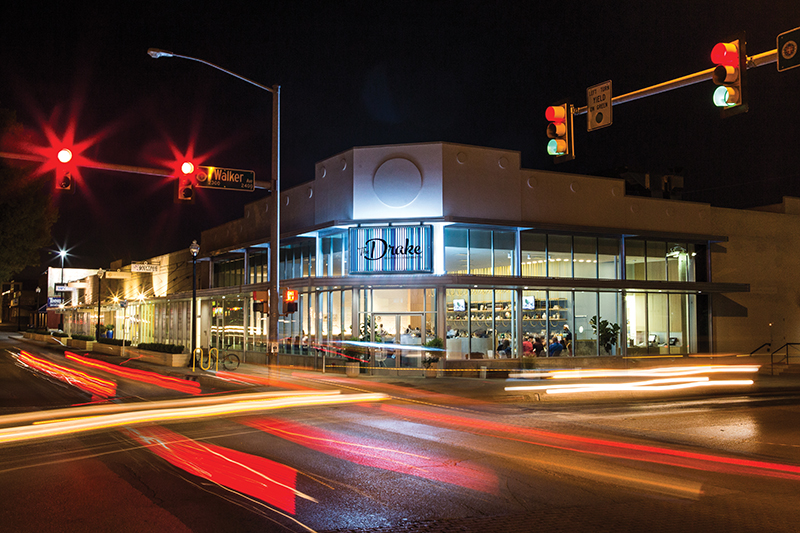 But don’t dive into the sea of possibilities right away; first you really need to try the appetizer called Lona Faye’s Four “H” Club. I was in 4H as a high-schooler, but I would definitely have enjoyed it more if, rather than “head, hands, heart, health,” the name had referred to this platter of hush puppies, ham, honey butter and hot sauce. Whatever proportions you combine them in, the flavors overlap extremely well, and there’s something decadent, as well as delicious, about smearing butter onto a thin slice of ham wrapped around a crisp, hot, crunchy ball of fried tastiness.

Now, let’s talk seafood. Even if you’re a neophyte (cough), it’s worth investigating the oysters; not only are the options plentiful, the presentation is impeccable via an ice-filled tray and side flourishes including freshly grated horseradish, grilled lemon and a choice of accompanying sauces (we preferred the bright citrus flavor of the yuzu-jalapeno mignonette to the more astringent punch of the rosé, but your mileage may vary). 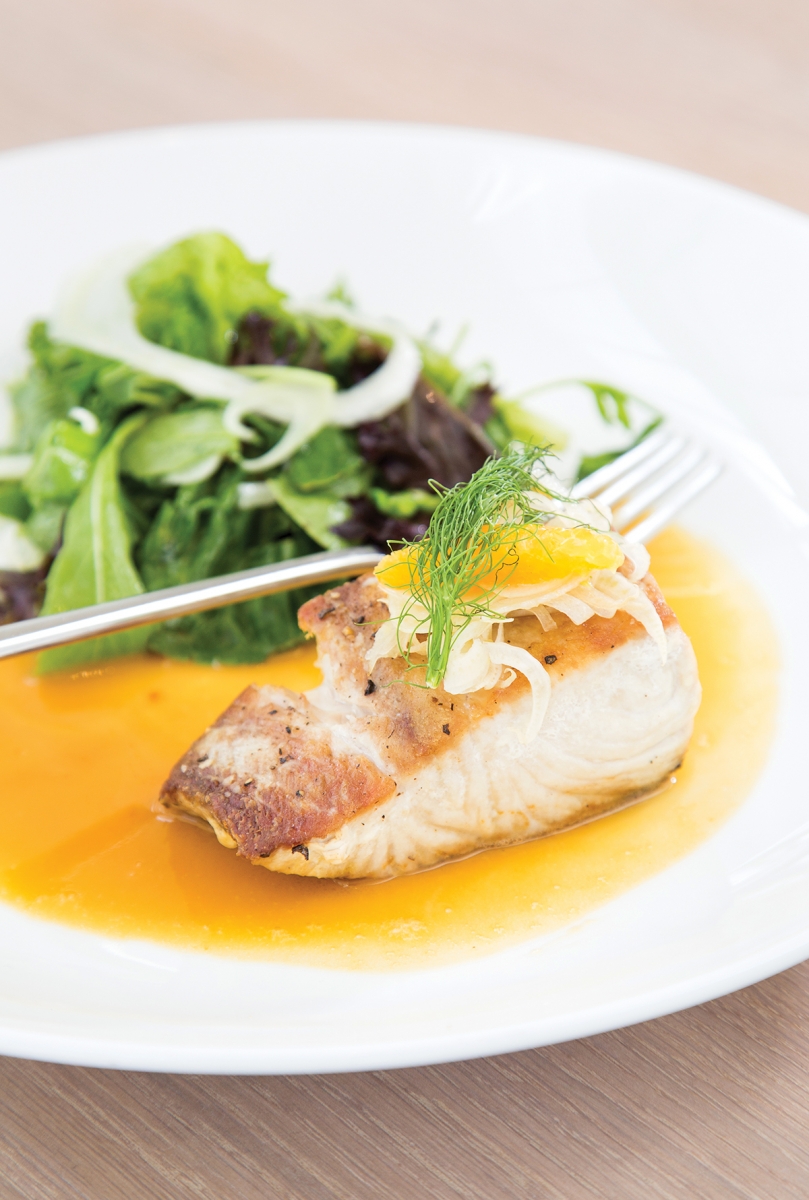 And as for the main dishes, well, there was lively debate over which came out the best among the lusciously rich lobster roll – it comes with drawn butter, but you’ll never need it, though the drizzle of tarragon mayo is appreciated – the seared hiramasa filet that was exquisitely cooked and served in a pool of mildly tangy orange sauce, or the grilled scallops. I felt that the presence of the crumbles of crispy chorizo on the latter pushed them over the top, but our party never did reach consensus, so I can only encourage you to experiment.

Meals are best taken in groups anyway, the better to allow for sharing among multiple dishes and to take advantage of the Drake’s family-style presentation. That means dishes come to the table as they’re ready rather than all at once, which doesn’t shake out to more than a couple of minutes difference, but more importantly, sides are served in multi-person platters. So pick something everyone can get behind, such as the popcorn grits or black mac – it’s tinted with squid ink for visual interest, but it’s delicious in its own right and sneakily spicy with a slow-building, lingering heat. 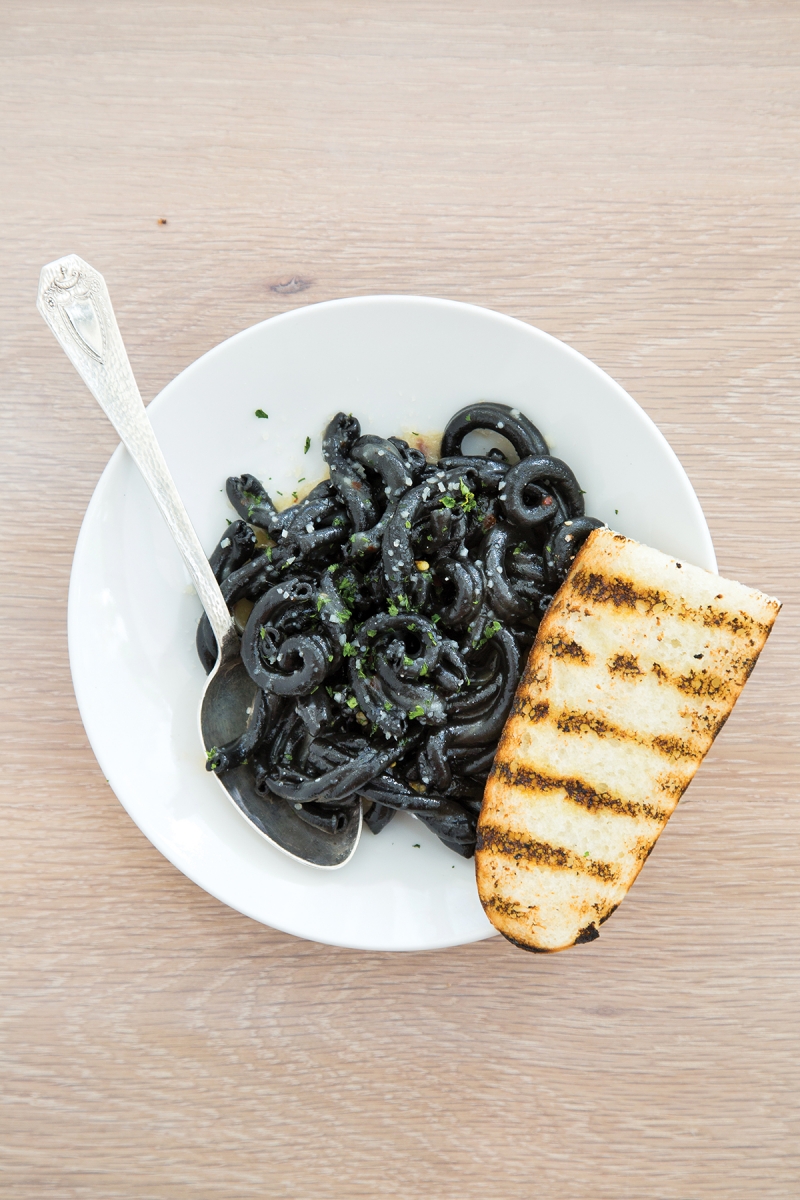 Dessert is something of a thorny issue: the menu is packed so full of tempting things to try that diners are likely to be equally sated once the entrée plates are cleared. But if you can manage to preserve a bit of room, you’ll be richly rewarded in the form of a sweet treat like the Drake Creamsicle – a glass of cookie crumble, orange sherbet, vanilla ice cream and tangy orange curd swirled together – or the heavenly zest-beflecked lemon cloud pie with its crust of Biscoff cookies.

In sum, The Drake is a delight. Even taking into account the high expectations metro diners should have considering the success of the other Good Egg restaurants, this newest venture clears the bar with style. More than merely the novel catch of the day, it’s an eminently worthy addition to the metro’s dining scene.

• Advance to the rear. The Drake directly abuts the ceaseless bustle of NW 23rd, so bear in mind there’s a good-sized parking lot to the north of The Rise, as well as streetside slots along Walker.

• Trust the experts. Seafood is a broad category, and as Oklahomans, we might not have an encyclopedic knowledge of the differing flavor profiles among Malpeque, Wellfleet and Kunamoto oysters. But don’t worry – the waiters know their stuff, and can walk you through whatever questions you might have after perusing the menu. Just say the word.