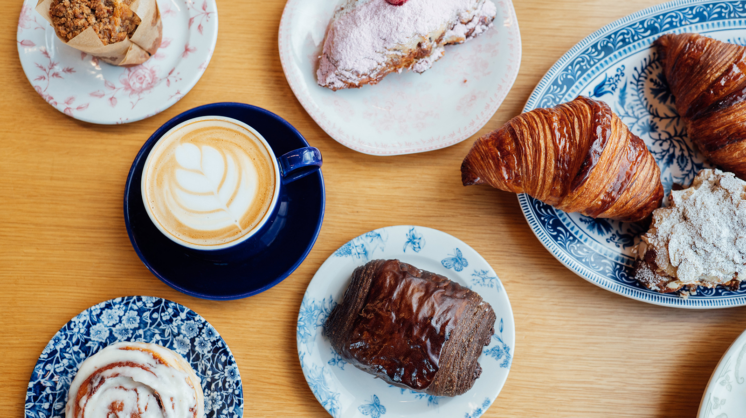 Great baked goods and much more deliciousness at this versatile hot spot.

The creative center of Harvey Bakery and Kitchen is pastry chef Alyssa Ulrich. Before Harvey opened at 301 NW 13th St. in 2021, Ulrich had already built a following at Hall’s Pizza Kitchen, thanks in large part to her delicious cookies and cinnamon rolls. The success of the dessert program at the popular Midtown pizza joint encouraged Ulrich to dream of a full-service bakery, a dream that meshed well with owner Molly Hall’s plans for expansion.

“I fell in love with the old Chrysler showroom when I toured the space in 2019,” Hall said. “Alyssa’s pastries and cookies had been huge sellers for us, and so we were looking for a way to expand that component of the business.”

The showroom, built in 1947, is located on the corner of NW 13th and Harvey in a gray area between Midtown and Heritage Hills. “The original touches that remained inspired me to bring as much as possible back to life,” Hall said. “I love the mosaic, the stairs, the 14-foot windows, all the natural light — you can tell it used to be a showroom. We want Harvey to be a place people come every day, and that requires the space have character.”

It also requires the place to have good food, and thanks to Ulrich’s leadership and talent, it has stellar food, beginning with the pastry program. Ask the regulars what the best pastry is, and at some point, everything in the case will be named: Midnight Cowboy croissant, raspberry-almond croissant, cinnamon roll, blueberry coffee cake muffin, savory scones, sourdough English muffins — all of it. Ulrich seems incapable of baking items that aren’t delicious.

Ulrich said she’s known she wanted to be a baker since she was 9 years old working in the kitchen of her maternal grandmother. Those moments baking cookies for Sunday school or treats for classmates formed visceral memories for Ulrich, and the pursuit of nostalgic food memories drives much of what she does at Harvey.

“I want to create food that is memorable,” she said. “There’s that scene in Ratatouille where he takes a bite and is transported back to his childhood. That’s what I’m trying to do.”

Her breads and pastries are also used in the kitchen, where Harvey expanded quickly from breakfast to brunch and lunch. Breakfast is a combination of toasts, bowls and sandwiches, including some very creative breakfast sandwiches like the Birch House: sausage, thyme and chive scrambled eggs, cheddar, honey and Sriracha on an English muffin. Lighter, healthier items are available, but we’re talking about a bakery, not a fitness camp. However, for those curious, the protein bowl has avocado, quinoa, boiled egg, fruits and nuts with a chive vinaigrette.

The lunch menu features sandwiches, soups and salads. The star of the sandwich column is The Giovanni, featuring Italian cured meats, fresh mozzarella and smoked provolone, and a cherry pepper spread that you’ll want to take home in a jar, all served on salted, freshly baked focaccia. The sandwich list includes classic favorites such as Italian meatballs on ciabatta, chicken salad on sourdough and a club on white bread. That in particular might be the best proof of Ulrich’s skills: It’s intensely delicious, and it’s white bread.

A couple of the sandwiches are creative takes on classic combinations, like a bacon and pimento grilled cheese, and The Cardini’s tenderloin and caesar salad on sourdough. The vegan option is thoughtful and flavorful, built around grilled portobello and roasted carrots on flatbread. Sides include housemade chips, salad, soup and fruit. The eclectic menu makes it easy to eat healthy or not.

Harvey wasn’t open long before Hall started taking commercial accounts. Expanding into the commercial side was always part of the plan, as Hall said she and her team planned around something that the community needs. The last large-scale commercial bakery that could produce enough bread to service area restaurants was Prairie Thunder, which closed in 2016. Since then, many local joints have been sending orders and money up the turnpike to Farrell Family — owned by Justin Thompson Restaurant Group — in Tulsa. For now, though, she’s adding accounts slowly, so as not to overwhelm an already busy kitchen.

The coffee service at Harvey features Arkansas-based Onyx Coffee Lab, an excellent roaster with a growing presence in central Oklahoma. You’ll find mimosas on the brunch menu, and as of August, Harvey started rolling out a cocktail list. The patio is an excellent choice for coffee drinks or cocktails, and the mezzanine offers plenty of work space in a quieter setting.

Harvey Bakery and Kitchen is designed around Hall’s idea of hospitality, which begins with the same ideals she applies in her own home. “If a guest comes to my home, I care about their dietary restrictions and the things they love to eat and drink,” Hall said. “We want to extend the same hospitality at Harvey.”