The Humphreys’ Life by the Lake - 405 Magazine 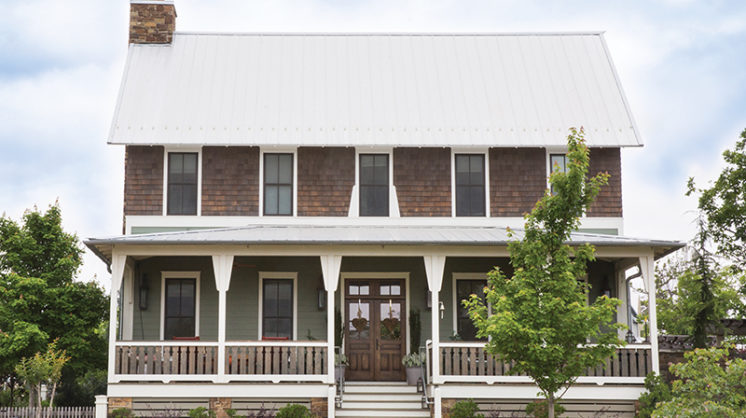 It had been almost a hundred years, as far as Grant Humphreys can tell, since a new town was founded in Oklahoma. That is, until last year, when he reset the counter. His idyllic planned community, Carlton Landing, is now an incorporated town – complete with a mayor, its own utilities and a public school.

Grant, his wife Jen, and their passel of children – Emma, 16, Ford, 14, Jack, 12, Mary, 9 and Hank, 7 – became full-time residents of the meticulously articulated community on Lake Eufaula in 2011. “We began working on Carlton Landing in 2006. We had been to Seaside, Florida, and loved it, and wanted to bring the concept here. We wanted a walkable community, and originally envisioned it as a weekend or vacation community – but we realized that if we wanted it to have a soul, it needed full-time residents,” says town (and family) patriarch Grant.

That was in 2011. The Humphreys clan had just moved into their dream home, Jen’s “forever home,” in Heritage Hills. “I won’t lie, I shed a lot of tears while we were making our decision, and at a certain point you just have to sort of laugh at the direction the Lord takes your life,” says Jen. “When we moved in, there were four buildings: the Meeting House, two town homes and one house down by the General Store, which wasn’t there yet. We’d come home in the evening and close the big cattle gate.”

Now there are 110 homes built, about 30 more under construction, and the town has a school (which was founded by Jen), a general store where a grill serves burgers that can be ordered on the way to school and eaten for lunch, a new Fish House restaurant, cooking classes and chef’s dinners, social events, a huge town garden and farmers’ market, even an Airstream trailer that serves snow cones and tacos. 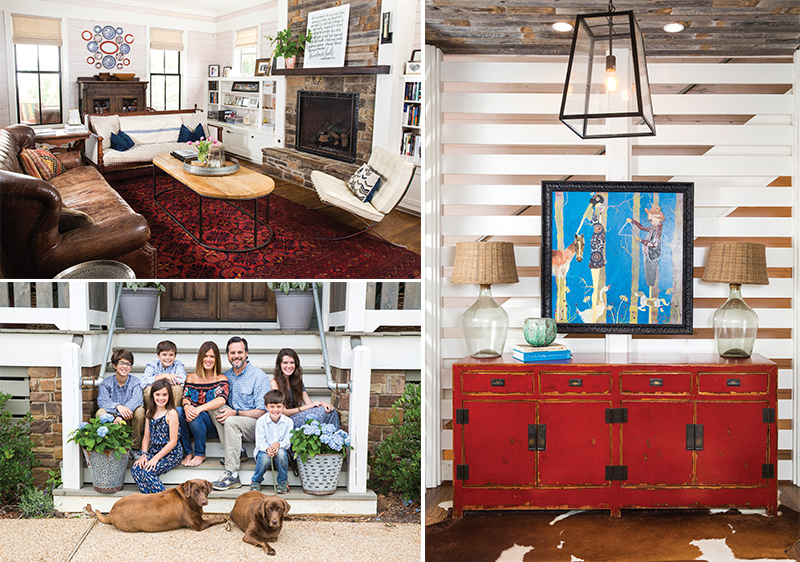 • Closely placed furnishings make the living room instantly cozy. A harmonious mish-mash of mattress ticking, leather, modern and traditional couches and chairs, an Oriental rug underfoot and a farmhouse-style arrangement of plates and platters hung as art make this a room perfect for gathering with friends or whiling away a summer afternoon with a great book.

•A piece by OKC artist Denise Duong anchors the space above a lacquer-red, distressed buffet that adds even more storage for the family. Throughout the home, a mix of textures and styles is cleverly combined, evidenced here by the juxtaposition of the cowhide rug, wrought-iron pendant light and jug-shaped glass lamps.

Jen soon adapted and found ways to bring the creature comforts that were most important to her family out to Carlton Landing. As she spoke, the theme song from “Green Acres” was almost audible, particularly the line “Goodbye, city life!”

“Barre3’s online classes became my gym, and I realized that some of the things I worried that I’d miss, like Target and Starbucks, I really don’t miss at all,” she says. “And what I’ve gained as a mom is that I can relax. My kids walk to school and come home for lunch. I don’t have to worry about where they are. They can go out and play until dinner.”

These days, a fitness instructor offers classes in town, residents can order in groceries from Whole Foods and Sprouts in Tulsa, and a masseuse is available on a weekly basis. “We used to drive in to Tulsa about once a week to grocery shop, but that can take up most of the day,” Jen says. And believe you me, for this mom of five who is also serving as the Carlton Landing school’s interim principal, every moment counts.

• The kids’ rooms are shared spaces with common areas, study spots and these built-in sleeping cubbies, which give each child his or her own private space and even more storage underneath.

• Like the rest of the house, the master suite where Jen and Grant retreat from their brood is a modern mix of new and classic design references and motifs. The traditional curved shape of the bed frame takes on a more modern and sculptural look when rendered in black and paired with a graphic rug.

• If this house had a decorative motto, it might be clever, practical whimsy. Here in the powder bath, the hand towel is saucily proffered by an antique mannequin arm.

Grant walks about two minutes to his office, and he comes home for lunch, too. “We love that we have all of our meals together as a family,” he says. “We gave up some things to live here, that’s true. But we’ve gained so much. Our lives are simple. For me, I have gained time, personally and professionally. I love what I do: I work and I spend time with my family. I go to Oklahoma City one day a week, and that’s it.”

“Unless he has to, Grant never leaves,” smiles Jen. And why would he? 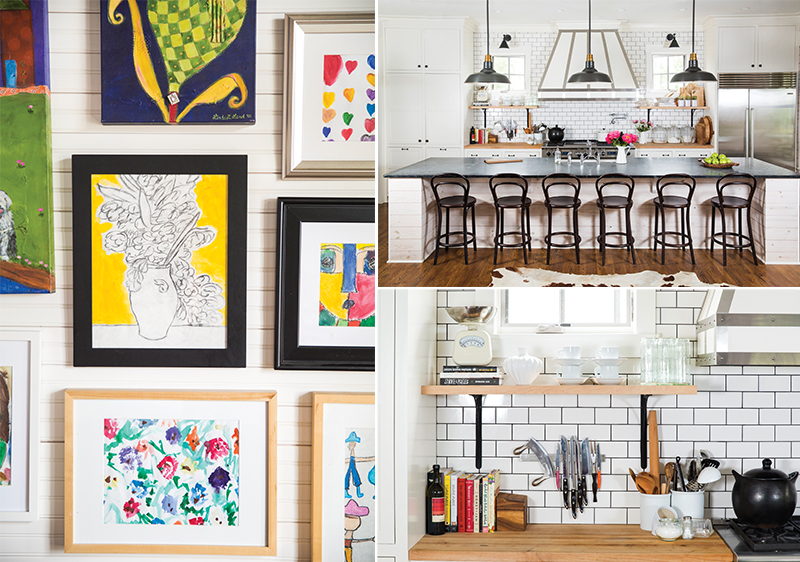 • Original art by the prolific Humphreys children fills a wall with joyful color. A few pieces of professional art punctuate the arrangement.

• Jen and Grant’s beautiful kitchen looks pristine in the moments before five hungry children descended upon it for lunch, having just walked home from school. If this kitchen counter had a nickel for every sandwich made on its surface, it would be a millionaire. The space has been carefully planned to accommodate near-constant entertaining, which the family loves, and the day-to-day plundering of children. There are two dishwashers, a vast pantry, an industrial-sized fridge and stove and six barstools.

• Although the home is roomy, the family makes use of every extra square inch of storage space, including the walls. Jen, who is a phenomenal cook, has adopted a tried-and-true restaurant trick for storing her gear right where she needs it: a magnet slices through clutter, while crockery corrals utensils and tools.