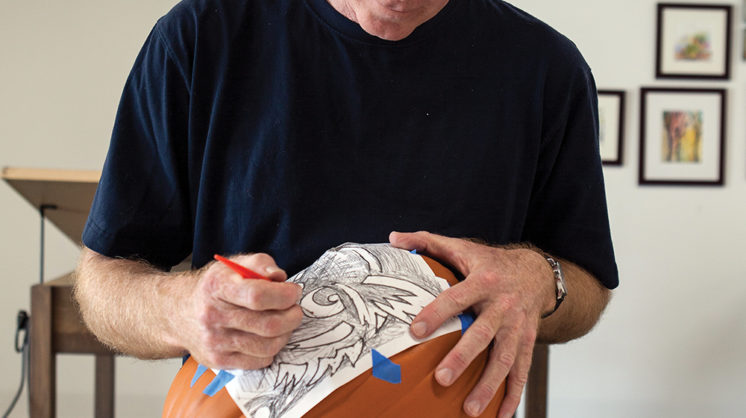 While tombstones and cobwebs and black cats abound this time of year, one of Halloween’s most recognizable symbols is the jack-o’-lantern. Examples often can be found on the front porch, a flickering eerie light illuminating the black October gloom. There are the plastic ones that kids have carried for generations to bring home their treats, as well as the glittery decorative kind hobby stores sell by the truckload. But these days, the jack-o’-lantern has gone high-tech, with artists lending their skills to the intricately carved gourds.

The trick in carving elaborate pumpkins lies not only in the design, Holland said, but also in the tools used.

“With the new jigsaw-type hand carvers they sell nowadays, you can get some amazing results,” he says. “They allow you to carve curves with little effort and no danger of personal injury. I’ve taught kids as young as 12 to do it. There are countless patterns available both online and in stores.”

It takes Holland about 30 minutes to transfer his intricate patterns to the pumpkin, and about 10 minutes to scoop the goop out of the middle and get it ready to carve. Then it takes another 45 minutes to an hour to do the carving, but simple designs, he said, go much faster. And this time of year, he stays very busy.

“The most I ever carved was 30 pumpkins – for a single Halloween party put on by a wealthy man at his estate near Norman,” Holland says. “We had them lining the driveway, around his pool and house, and one multiple-pumpkin banquet table sculpture that was a long, interconnecting snake. So each year is different, but I typically carve between five and 15.”

When it comes to pumpkins, Holland says size really does matter. In fact, the bigger the better. He scouts what he needs at the local farmer’s markets, and even Sam’s Club and Walmart. These days, he’s been teaching carving classes at the Myriad Gardens, so he gets to go through the ones they bring in and choose the biggest ones. (And by the way, this year’s Pumpkinville runs Oct. 6-22.) 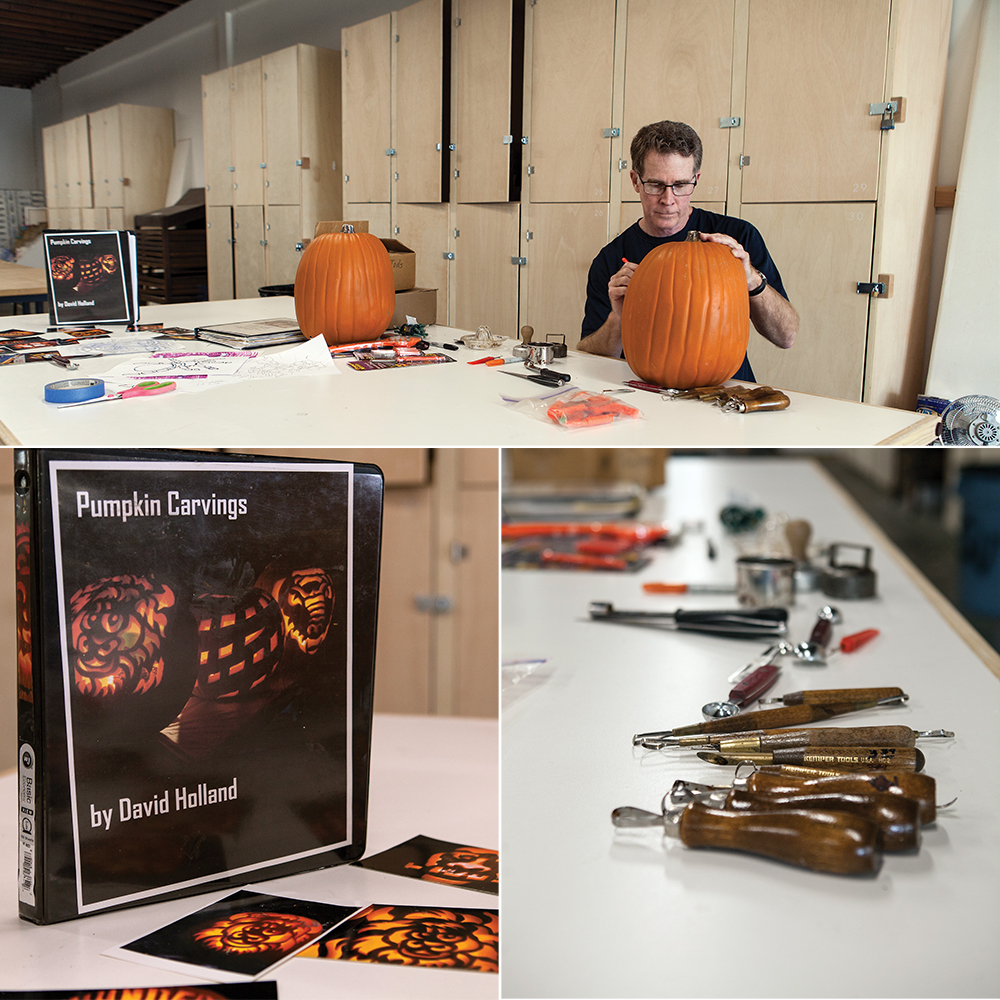 Once they are carved, the pumpkins will last anywhere from three to five days. “The longest I’ve had them last is about five days,” Holland says. “I soak them briefly with lemon water after I carve them to make them last longer; it keeps the molds and fungus that make them rot at bay for a little while.”

His designs run the gamut from a traditional Halloween witch to a dragon’s face and a tarantula, but Holland said his favorite is of Rumble, the OKC Thunder mascot.

“Back when the team first came to town, they employed me to make up five Thunder-themed patterns,” he says. “They were having an October promotion where if a fan carved a Thunder pumpkin and brought it to the game, they would get a free ticket and would be entered into a contest for the best carving. I got to go to my first pro ball game because of this. They gave me a ticket for sixth row center court; that was in exchange for pumpkins I carved, using the patterns I created for the promotion.”

One of his next goals is to do a Valentine’s carving, but, he pointed out, most pumpkins will not last through the winter. However, with Halloween around the corner, now is the perfect time for creating your own masterpiece.

“It takes a lot of patience to make a good carving,” Holland says, “so don’t rush it. Let the saw do the work, and don’t push the saw when you’re carving. It is the in-and-out motion that makes the saw work. Most of all, just have fun and enjoy the project.”