The Marion: A Story Restored - 405 Magazine 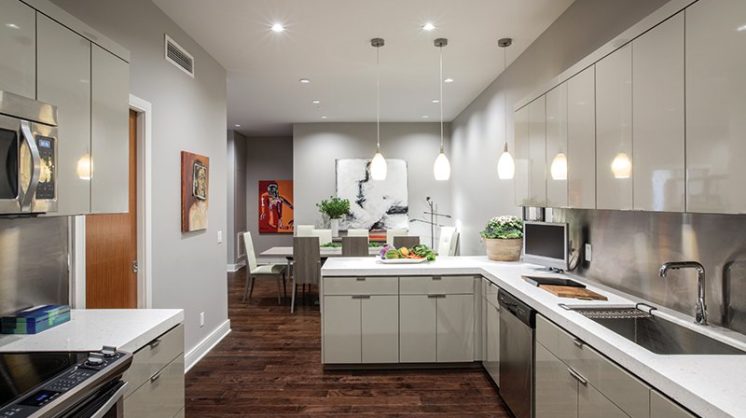 As twilight fell on Christmas Eve 1962, Malcolm Haney pulled up to the front of the Hotel Marion to drop off his grandmother, the longtime proprietress of the hotel. The family had just finished their annual celebration, which they called “our family Christmas tree.”

“I noticed that Grandma Bessie had put red light bulbs in the two stoop lights on either side of the front door,” Malcolm Haney says. “I asked her why she did it.”

Malcolm Haney laughs now as he tells the story, still funny after more than 50 years. “She’d never heard of a red-light district,” Haney says. Bess Haney’s grandson now lives in Kansas City, but like many of the Haney family, he grew up in Oklahoma City and spent many days and nights at the Hotel Marion, as it was known for most of its history. Since its refurbishment, the Marion Hotel seems to be the preferred designation.

Bessie Haney leased the Marion in 1946, and she was the proprietress – never the owner – for more than 30 years until her retirement in the late 1970s. Her husband died in 1954, and Bessie never remarried, nor did she ever hire someone to manage the Marion; it was her home and her job. After Haney retired, the hotel survived until 1985 – by then one of a few cheap, dilapidated hotels along NW 10th Street.

Built in 1904, the structure is the oldest commercial building in Oklahoma, and one of the few surviving from pre-statehood. The Marion opened as an apartment house, then was converted to a hotel in 1907. 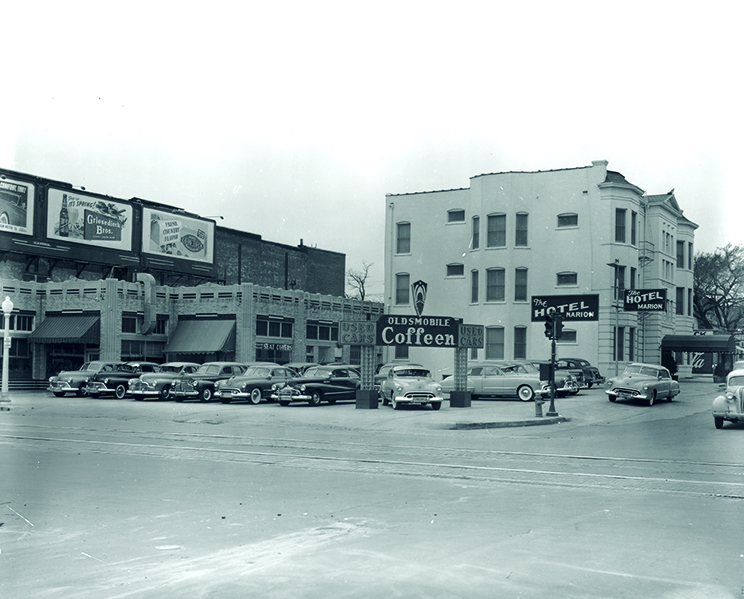 Pictures of the hotel over the next 40 years show a remarkably consistent image: the hotel’s beautiful Classical Revival shell, including the lovely red brick and white-painted clapboard around the fire escape. For several decades, a sign was posted on the corner of NW 10th and Broadway, right next to a fire hydrant, announcing the Marion’s presence. The lot just east of the hotel was full of Buicks a good part of the time, as the neighbor to the north was and is the Buick Building.

The task of being hotel proprietress requires mettle, hard work and diplomacy. Mickey Clagg, who owns the newly renovated site along with Chris Fleming, said of Bess Haney, “People referred to her as having an iron fist in a velvet glove.” Malcolm Haney described her as “the sweetest, dearest, gentlest lady, but tough in business.”

“She kept an eye on guests,” Fleming says. “There was no philandering in her hotel. If you were single and had a guest of the opposite sex in your room, you kept the door open.” 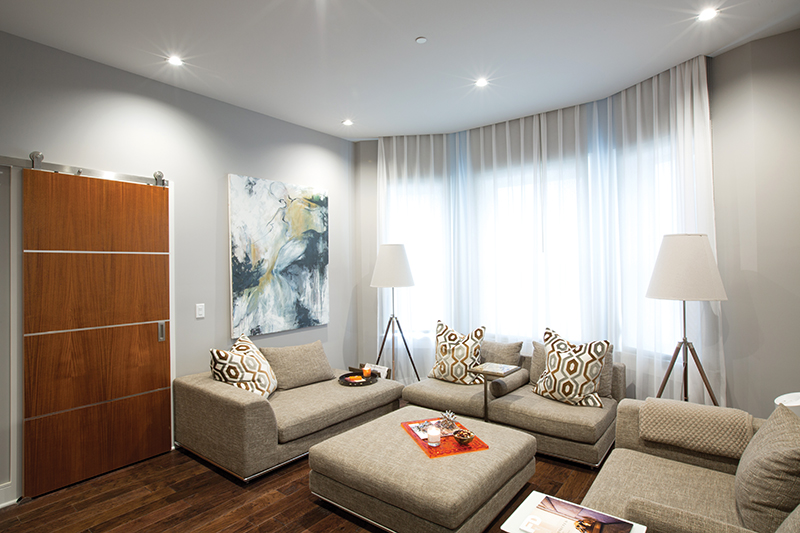 For most of the early and middle 20th century, hotels of all kinds were a mixture of rooms for day rental and long-term apartments. Bess Haney oversaw 32 rooms and three basement apartments. She kept a room around the corner from the reception desk to be closer to the entrance.

“There was no food service in the hotel, in most hotels, back then,” Fleming says. “You had to leave the hotel to get food.”

Rooms typically consisted of a bed, a chest of drawers, a nightstand or side table and eventually, a phone. Haney worked the switchboard herself until 10 or 11 p.m. nightly. The only television was in the lobby, which doubled as a day room of sorts. Each floor shared two bathrooms at the end of the hall.

One of the Marion’s architectural quirks was the fire escape. Fleming said the original fire escape – the metal portion of which now hangs suspended between the Buick Building and the parking garage to its west – was a spiral structure that went from the third floor into the basement. Guests would then have to walk up to the ground floor to escape.

“Not the best arrangement if the fire originated in the basement,” Fleming says.

Clagg said the idea to hang the fire escape as public art came about when they were moving it during renovation. “We brought a crane in to move it, and Chris saw it suspended above NW 10th and snapped a photo. It looked like a strand of DNA. The group talked about it, and we decided to make it work.” 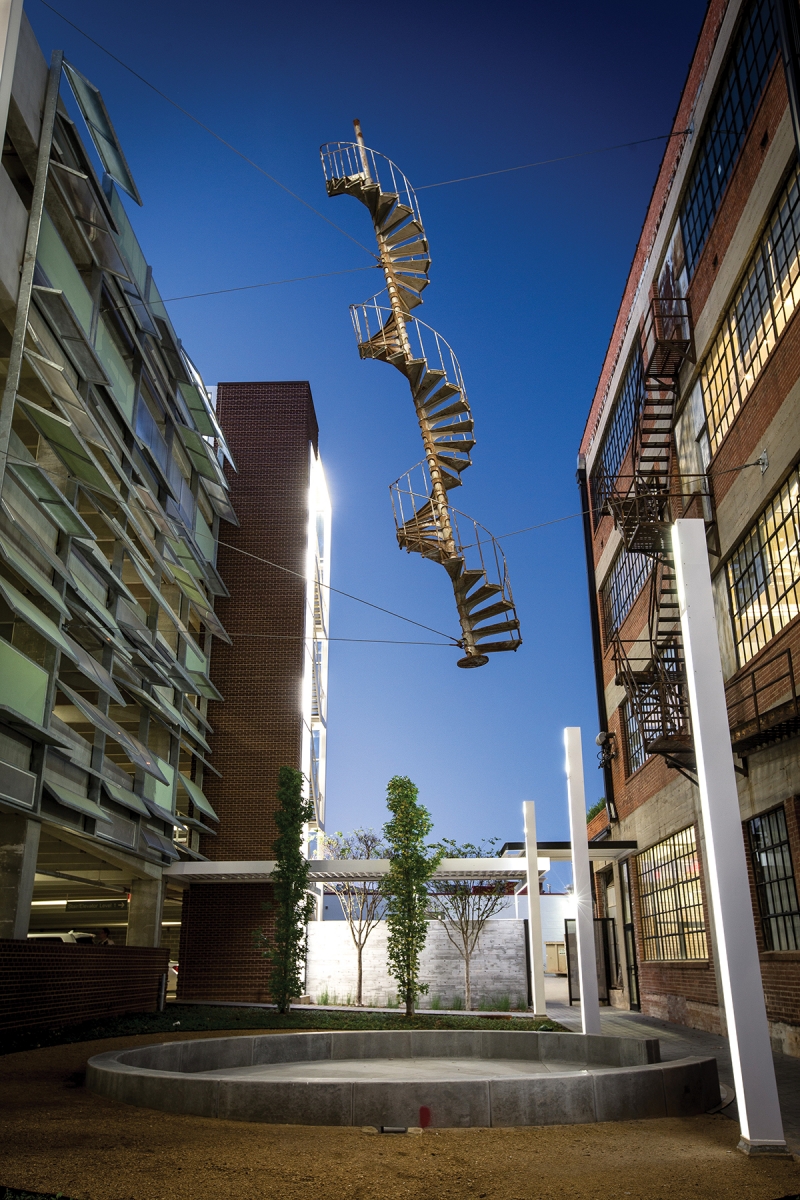 The renovation involved nearly the complete interior. Fleming said the interior staircase is about 70 percent original, and the mosaic tile floor in the foyer is original. Other than that and the brick façade, the Marion is completely renovated.

Lingo Construction and architect David Kraszewski did the work, and Fleming said there were many days that one of the team just stopped by to make sure the walls were still standing.

“We had to take the roof completely off,” he says, “and most people don’t realize how much structural integrity the roof offers. The whole time we had it off, one of us stopped by to make sure the structure hadn’t fallen down.”

Restoring the Marion but keeping the façade was one of the goals of the team, and the newly renovated facility is once again the beautiful structure it was designed to be. The hotel was one of the anchors for Automobile Alley, so it is fitting that some of the new tenants work on Broadway, just a few steps from the front stoop. 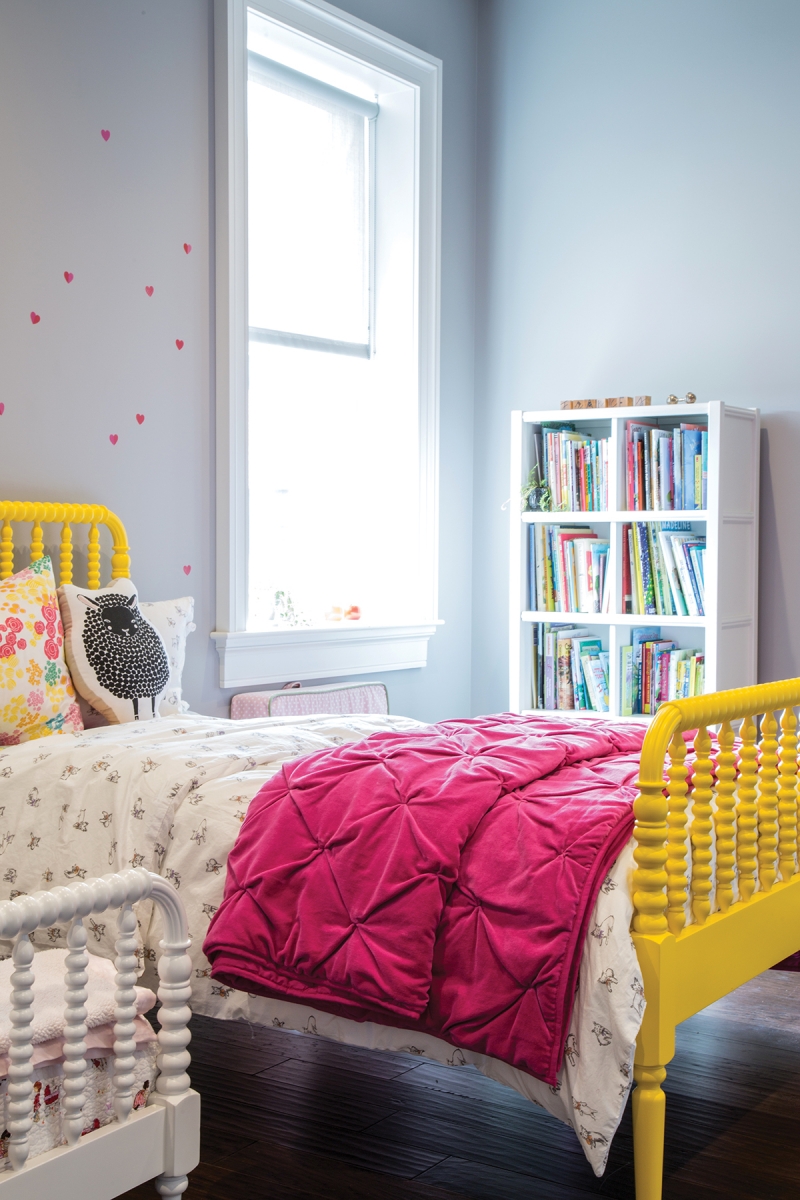 The building is full again, including families with small children. Grandma Bessie’s family is thrilled with the new iteration of their childhood home. Malcolm said Clagg and Fleming gave the family a tour of the facility before they leased apartments.

“We were ecstatic,” he says. “We were afraid that nothing would ever be done with it. It had important memories for us. One of the last groups that Bessie served were soldiers headed for Vietnam. The recruiting station was in the Buick Building in those days, and Bessie took care of those boys before they went to war.”

Buildings are always more than bricks and mortar when a family’s story is tied to the history of that place. Now that the apartments are leased, a new generation of families will make stories in the Marion, too.