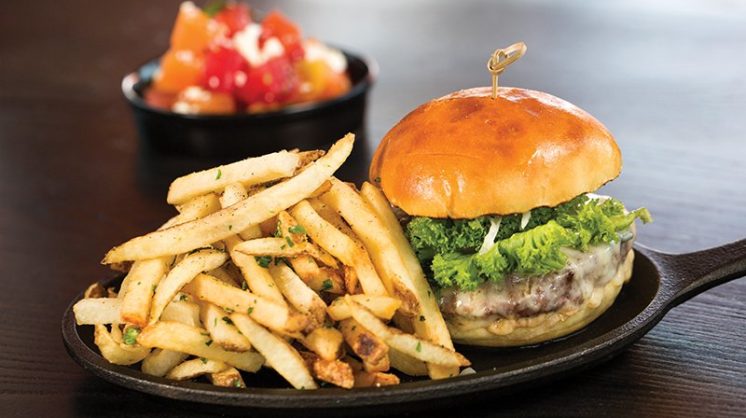 When Jason Campbell, executive chef of Mary Eddy’s Kitchen inside the 21c Museum Hotel on Film Row, gets started talking about his menu, two of his most frequently used verbs are “play” – in the senses of both experimentation and interaction – and “balance.” He’s clearly a culinary artist and experimenter, as well as an industry veteran, which makes him an ideal fit for this new landmark: a boutique hotel that incorporates a free, always-open contemporary art gallery into a space whose design is heavily influenced by its former industrial life as the Fred Jones Ford assembly plant.

The restaurant (named for Jones’ wife) is a big, open, high-ceilinged area that adds ample comfort – including, as we long-legged types will quickly discover, padding underneath some tables – to an aesthetic inspired by its manufacturing past. The massive concrete pillars, for example, aren’t ponderous afterthoughts, they’re deliberately echoed in the octagonal lighting fixtures.

Watching Campbell and his team of chefs work in concert is rather mesmerizing; a perch at the broad wooden bar overlooking the kitchen would by no means be a bad thing, even if it means you won’t be able to cuddle up to one of the passel of purple penguins (hotel mascots) who are known to drift from table to table during the evening. Wherever you’re sitting, you’re in for some treats.

A good start would be the Toolbox – a sort of meat and cheese appetizer that doubles as a preliminary showcase for the kitchen’s expertise. Charcuterie is a particular point of pride for Campbell, and almost everything in the dish is made in-house, including the pickles and relish. The bread is from Prairie Thunder, but the secret ingredient to this toast is its spread of delectable drippings collected from the meats roasted in their massive rotisserie.

Listed as an appetizer, the ribs are plenty substantial – they’re from lambs raised on a farm near the Texas border, cooked sous vide for 36 hours and charred on the grill, then lacquered with a sauce of apricots and peppers. 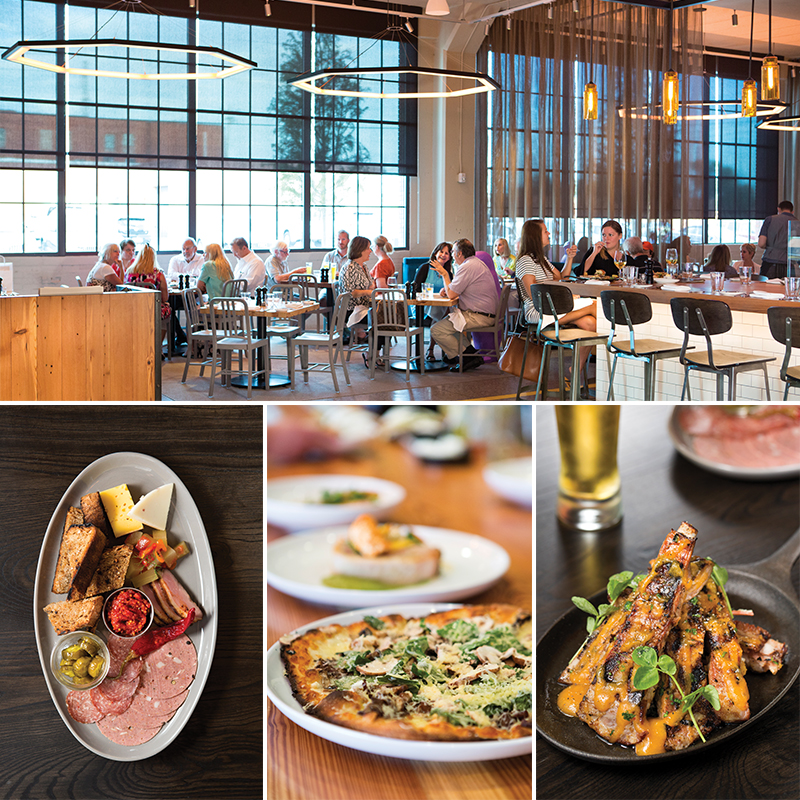 The pizzas feature sauce made in-house from Campbell’s Italian father-in-law’s recipe, and dough that’s the result of lots of experimentation, leaving no bone at the top of each slice but a rewardingly crunchy bed. They deliberately don’t load it down with a surfeit of toppings to keep the diner’s focus partially on that foundation and maintain the pizza’s structural integrity. Campbell smiles that “we want it to stand out straight when you pick up a slice.” I recommend the pineapple porchetta’s deft interplay between raw and cooked, sweet and spicy, but the rest of our party preferred the Shrooms’ three kinds of fungi, so follow your heart.

You might balk at the $16 tag on the Thin Lizzy burger, but I urge you – as a friend – to try it. The 79-21 blend of pure ground chuck results in a magnificently juicy patty, with aged cheddar melted on top and a lemon aioli (never seen that before) to offset the somewhat peppery bite of the mustard greens. It’s amazing. I think I had a Dave-Bowman-at-the-end-of-2001 look on my face after the first bite.

Even the vegetable-centric side dishes shine: the melon salad’s ripe, sweet, gloriously vibrant hunks of cantaloupe and watermelon have been compressed with a kaffir lime simple syrup, and are served with chopped herbs including Thai basil, plus flecks of feta cheese that’s been marinated overnight in a house blend of oil and herbs to infuse it with additional nuances of flavor. This is an “extra step” kind of place. In another side, heirloom carrots of varied colors are roasted to tenderness and served on a harissa-spiced yogurt with red quinoa folded in. “I worked for a Moroccan chef,” explains Campbell. “He’s a big influence on the way I cook.” 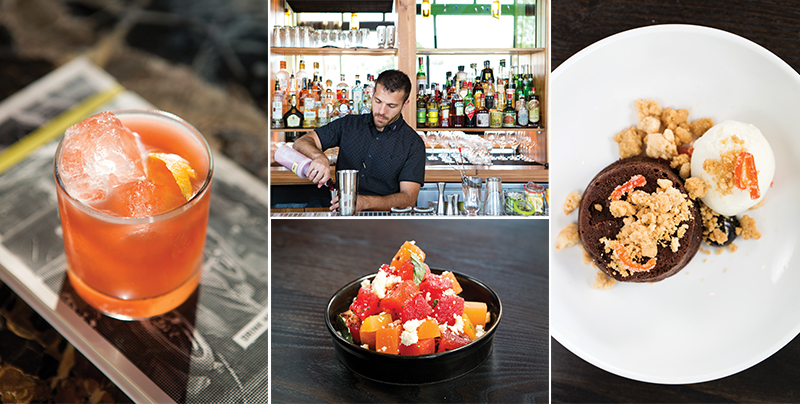 For the meal’s crowning touch, consider the flourless – and therefore gluten-free, ahem – and quite rich chocolate torte, served with a small dollop of sweet cream ice cream and a candied, sugared strip of Fresno pepper (spices sneak in all over this menu). Or the light, tangy key lime semifreddo crowned with toasted almonds and microcilantro. And if neither of those appeal, bear in mind that the kitchen can also whip up a mug of grape cotton candy in a twinkling.

21c’s philosophy overall seems to be that it’s worth the effort to incorporate art into commerce – the establishment is clearly driven by a love and genuine appreciation for creativity. Fortunately for hungry patrons, the same is true of Mary Eddy’s, where artistry is evident in every dish.

21c is a solid drinks destination, as well, whether at a small table for conversation or the gleaming wooden bar for ambiance. Food and beverage director James Tortoreti occasionally steps behind the bar to whip up a cocktail like this tequila-powered Rosy Finch, but they also specialize in bourbons, with an emphasis on “special.” There are some labels here that I, as a devotee, am sincerely excited about investigating.