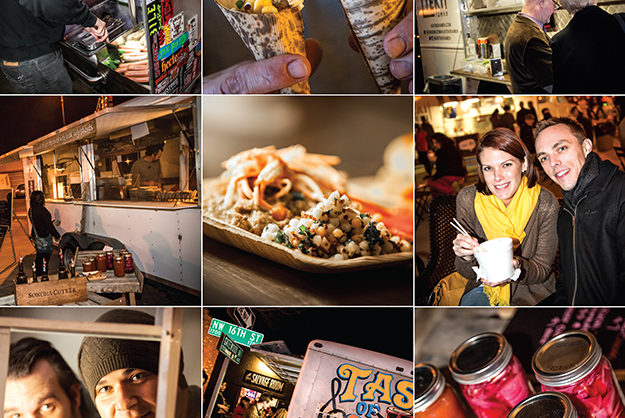 A Few Years Ago, The Term “Food Truck” Would Have Drawn A Blank Stare From Most Oklahomans, Transplants And Frequent Travelers Aside. Then Big Truck Taco’s Appearance – And Win – On The Food Network’s “Great Food Truck Race” Catapulted The Industry Into The Limelight In OKC, And Paved The Way For A Delicious Revolution In The City’s Food Consciousness.

Part of The Excitement Generated by The Food Truck Phenomenon is The Treasure-Hunt Atmosphere associated with locating a mobile eatery at any given time. While many websites have popped up that are designed to help hungry fans find their faves (roaminghunger.com is a popular resource), the best tool by far for tracking down food trucks has to be Twitter. While many trucks have standing dates and times at certain locations, last minute cancellations or updates often come through tweets. Finding new trucks to try can also be an exercise in online sleuthing skills; far from being a cutthroat struggle, the food truck community has more of a genial gypsy personality, with “follow” lists on trucks’ Twitter feeds stocked with fellow vendors for you to file away as future possibilities.

The H&8th monthly festival (March through September), is another way to sample the city’s best food trucks. A street festival centered on music and food, H&8th is held downtown on the last Friday of each month, on Hudson Avenue between N.W. 7th and 8th. Get info at h8thokc.com.

Putting together this guide of suggestions was based solely on trucks’ availability and time and space constraints; what follows is simply an introduction to a few of the metro’s rolling restaurants, and not at all a comprehensive list or commentary on trucks not showcased. Although I personally had never eaten at a food truck before this project, I developed a fondness for the subculture associated with the movement (hard-core devotees are reminiscent of a hunter-gatherer society, using smart phones and laptops to find their prey) and I found my idea of dining out to be much expanded.

If I had no deadlines and unlimited resources (to include a budget for stretchier pants), I would have tried them all …

“Vegan” Isn’t Usually The First Thing That Pops to Mind When One Thinks of Food Trucks. “Delicious” isn’t usually paired with the term, either, which is often associated with things like Tofurkey, and veggie bacon that looks like construction paper. Co-owners Jon Grupe and Richard Bassett set out to challenge those notions when they started The Loaded Bowl, and use the term “conscious comfort food” to describe their creations.

The effort – from making a special cashew-based “cheese” to using Grupe’s mother’s tomato sauce recipe for the lasagna – is obvious, and the effect is an amazing one. The Loaded Bowl’s enchiladas and lasagna could go toe-to-toe with non-vegan counterparts any day, but for a real glimpse of Grupe and Bassett’s genius, try the mac and cheese. Rich and flavorful, this dish is one that could make a non-vegan believe that a life without dairy might not only be possible, but delicious. A meal at The Loaded Bowl is a great way to be kind to animals … and yourself.

A Glance at Moto Chef’s (Rotating) Menu on Any Given Day Might Make You Wonder if you’ve stumbled onto a mobile Michelin-starred restaurant; saying the phrase, “I’ll have the bouillabaisse with rouille and black truffle sea salt” through the window of a truck is a little surreal.

That dreamlike quality is a constant, however, with the cuisine of Moto Chef, courtesy of Chef Guy Romo. Sampling their winter menu meant encountering such a staggering variety of sublimely flavored soups and stews that time and space simply don’t allow for me to do them justice. From a Polish hunter’s stew with kielbasa and sweet potatoes to a white onion and beer cheese soup, the level of attention to detail puts Moto Chef in a class all its own. Hearing terms like “port wine reduction” and “homemade shrimp stock” used in reference to food truck fare is your first hint that you’re in for a treat, and the taste of the food seals the deal. An anniversary date-level meal that you can eat sitting on a curb.

Chef Corey Harris Honed His Culinary Skills at Places Like The Ford Center And The Skirvin before starting up Off the Hook a year ago. The rotating menu keeps a few constant standards available, like the fish and chips, which is a customer favorite for good reason; lightly coated and flavorful, the generous portions are not at all greasy and have no “fishy” aftertaste – a hallmark of thoughtful fried fish production. Still not sure about seafood from a truck? Ease into your relationship with Off the Hook by trying out some of the items covered by the “and more” part of their title; while many seafood establishments simply tack on chicken fingers and salads as afterthoughts, Off the Hook’s alternative offerings are anything but. The Black and Bleu Burger – a Black Angus patty cooked to perfection, topped with bleu cheese and crispy onions, served on a Kaiser roll – is reason enough to track them down.

Like Many Native Okies, a Standard Fixture of my Childhood was the Barbecue trailer at the local grocery store on most weekends. A primitive precursor to the current food truck fad (along with old school taco and tamale trucks), these trailers often had their own smoker and a simple menu; mostly brisket and ribs. Smokin’ Okies has all of the nostalgia – and fantastic taste – of those Barbecue trailers of old … with some exciting new spins. Along with classics like smoked chicken and brisket sandwiches (and additional surprises like award-winning chili), husband and wife team Larry and Nancy also offer one-of-a-kind inventions like the SOB (Smokin’ Okie Burrito), a mouthwatering blend of crispy cole slaw and piquant pulled pork, rolled into a grilled tortilla. There’s no scrimping on sides, either; “Pintos with a Kick” and mac and cheese are available to round out your meal, and their baked potato casserole is a creamy, cheesy dream of potato-ness that serves as a perfect complement to their spicy entrees. A Barbecue encounter that left my tasting partner and I uttering terms like “Okie-riffic” and “Okie-licious,” Smokin’ Okies is a true Oklahoma experience. (“Okie-perience”?)

With 15 Years of Asian Cuisine Experience Between Them, Kaiteki Ramen Co-Owners Jeff Chanchaleune and John Vu have realized their shared dream of opening a ramen shop and are now blessing the metro’s boulevards with incredible Japanese-inspired dishes.

Their signature dish, the Kaiteki Ramen noodle bowl, has a blend of flavors that showcases the duo’s talents. Shoyu style broth is filled with fresh noodles, ginger-ale braised pork belly, and a variety of other tasty counterparts, including kamaboko, menma, snap peas, nori and negi. Not sure what those are? I wasn’t either. But you can study before you sample, using the Kaiteki website’s glossary of unfamiliar terms. For a treat, try the Pork Belly Bao – savory pork in a soft bun with plum sauce and pickled cucumbers – with a side of Kaiteki’s famous fried Brussels sprouts. Yes, fried Brussels sprouts. Seriously. Trust me, you’ve never had so much fun eating vegetables.

Cerese And Ricki Bly Have Been Putting Their Personal Spin on Asian Cuisine via the Taste of Soul Egg Roll truck since 2012. “Ricki hated egg rolls, and I loved them,” Cerese, a former restaurant server, explains. “I was determined to make an egg roll so good even he would like it, and I did.”

Sidenote: I can vouch for that – Cerese’s recipe is designed to win converts. A member of our tasting party was an avowed eggroll-eschewer before trying one at Taste of Soul.

Egg rolls are generously sized, crusty and crunchy, with a texture evocative of Southern fried chicken. The chicken inside is moist and flavorful, and the ground turkey and jalapeno roll is spicy without being overpowering. Chicken fried rice has an extra kick to it, as well, with soul food spice that makes it unique without losing the dish’s meaning.

William Fontanez’ Puerto Rican Ancestry, Combined With Formative Years Spent in Louisiana, provides the basis for La Gumbo Ya Ya’s tasty fusion. Surprising combinations seem to be a specialty of the Fontanez family; in addition to having a reputation for feeding those in need (patrons are able to buy “suspended” meals to donate to the hungry), La Gumbo Ya Ya is also the official food truck of the Oklahoma City Roller Derby. Rachel Fontanez skates in the Derby, as well.

William and Rachel provide the metro with gravy drenched Po’ Boys, yummy gumbo and red beans and rice that are both mild enough for sensitive palates but flavorful enough to impress staunch Cajun cuisine enthusiasts. For a unique drink to complete your meal, try a tasty CoCo Rico, a Puerto Rican coconut soda.

For the Fastidious and the Fearful…

Diners who are concerned about food safety on four wheels can take comfort in the knowledge that the metro’s food trucks are closely monitored by the Health Department, and have to follow a stringent set of rules to be able to roll into a street festival or park on one of the city’s corners.

Regular review of policies on the Health Department’s end combined with the cooperation they receive from the food truck community points to a pretty harmonious relationship, which Custer affirms.

“I believe the Oklahoma City-County Health Department inspectors have a close working relationship with the Mobile Food Truck community and I am always pleased to see food trucks making public health safety a priority.”