The Politics of Purple - 405 Magazine 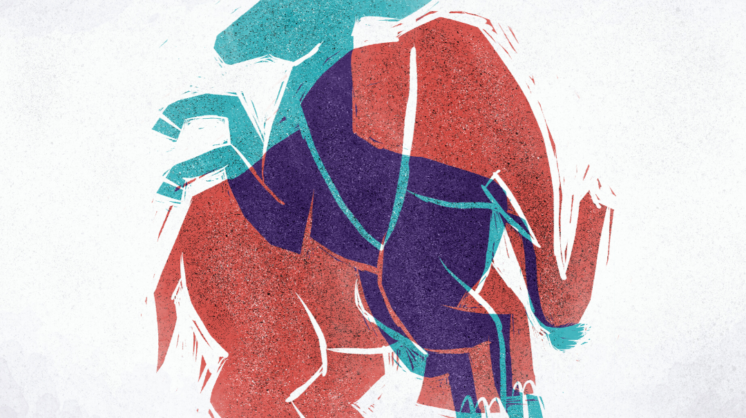 For most of the evening on Nov. 6, 2018, Oklahoma was awash in a sea of red on the cable channels covering Election Night results. Then, shortly after 9 p.m., MSNBC election analyst Steve Kornacki pointed to a blue dot that had just emerged in the center of the Sooner State: a Democrat had won the 5th Congressional District for the first time in 44 years.

“A Republican congressman from Oklahoma City, a race that barely anybody had bothered to poll, he lost his seat to a Democratic woman named Kendra Horn,” said Rachel Maddow on the next day’s edition of The Rachel Maddow Show. “Steve Russell, Republican congressman of Oklahoma will be going home. Kendra Horn, Democratic congresswoman from Oklahoma, has taken his seat.”

Conventional wisdom on the 2018 election, for once, was not so wise. An Oct. 2, 2018 poll from SoonerPoll showed Russell with a 10-point advantage over Horn, but JR Day of Okie Polls saw a radically different trendline leading up to Election Day. The final numbers Okie Polls released on Nov. 6, 2018 had Horn down by half a percentage point, with Russell polling at 50.29 percent and Horn coming in at 49.7 percent. The election was still a squeaker, but it flipped. Horn pulled 50.7 percent of the vote, with Russell losing with 49.3 percent — a difference of 3,338 votes.

“You have this moment where you take it all in, where you put your analyst hat on and say, ‘Wow, that really happened; now I want to know why it happened,’ Day said in an interview with 405. “Then you see the fire that the smoke was coming from.”

Many theories exist about why Horn won and Russell lost, with some observers pointing to the energizing effect that President Donald Trump has had on Democrats since the 2016 election. Others point to Russell’s performance during the candidates’ only debate on Oct. 25, 2018. In response to comments by Horn that “one of the biggest challenges to our economy is the growing gap between those who have and those who don’t,” Russell deployed a national Republican talking point.

“I think we have to have faith in the American people,” Russell said to a packed crowd at City Presbyterian Church. “Equitable distribution sounds a lot like taking away the free market.”

Russell received boos from the audience after that comment, but the beginnings of how Oklahoma City started trending toward progressive politics began more than 25 years before, when Oklahoma City Mayor Ron Norick and Oklahoma City Council proposed the Metropolitan Area Projects Plan (MAPS). The quality-of-life proposals that served as the backbone for MAPS helped attract younger and more progressive people back to the core of Oklahoma City. The Dec. 10, 2019, MAPS vote, MAPS 4, included progressive reforms to affordable housing availability, homelessness and mental health needs.

Interest in these issues informed the 2018 race to fill city council seats and drove progressives to victory, including Ward 2 councilman James Cooper, Ward 7 councilwoman Nikki Nice and Ward 6 councilwoman JoBeth Hamon. Hamon, whose ward stretches from Mesta Park to S.W. 59th Street, said that she discovered a lot of common concerns that crossed party lines during her campaign. She recalled a conversation she had with husband-and-wife constituents while knocking doors in southwest Oklahoma City.

“They had a Trump flag in their living room,” Hamon said. “They were an older couple that did prison ministry and so we talked about that, and the fact that I was talking about affordable housing and mental health … those were things that resonated with them. They specifically said, ‘We don’t vote for Democrats, but I think we’re going to vote for you, because you’re talking about things we care about.’”

Horn heard many of the same concerns over the past six years, first as campaign manager for Democratic gubernatorial candidate Joe Dorman in 2014 and then as a congressional candidate, when her “boots on the ground” campaign sought direct input from 5th District constituents.

“The issues that have been important to Oklahomans over the last handful of years were education and health care,” Horn said. “I think there was a critical piece of that conversation that was started about education and the need to serve all Oklahomans that woke up a lot of people.”

Leading up to her campaign, Horn said she saw a lot of changes in Oklahoma that allowed her to see a pathway to victory.

“In 2015, Cyndi Munson won a state house seat in a special election,” she said. “We saw some other things happening like that; other smart, independent Democrats running and winning in some of these urban and suburban seats. You know, in 2016 we all know the electoral outcome here in the state, but at the same time, Oklahoma voters and especially those in the 5th District voted with 70 percent of the vote to pass two criminal justice reform measures. They voted down State Question 777 (the “right to farm” act that would have effectively made factory farming corporations legally untouchable) by an overwhelming margin, they voted to change and update some of our laws while rejecting the idea that we should remove the separation of church and state clause from our state constitution. It’s a really visible reminder that many of the issues that have been framed as Democrat or Republican for a really long time are really not that.”

In the year since Horn won the 5th district, the 43-year-old congresswoman has held 10 town hall meetings with constituents and several meetings with businesses and industries based in Oklahoma City. She said that her first-year activity is not based on a political strategy, but is more grounded in the reality of addressing constituent needs and concerns and bringing them back to Washington, D.C.

“One of the most damaging things for any community is the sense that any effort to effect change with things that are of concern to people is futile,” Horn said. “I think we, collectively as Oklahomans, bought into that for far too long. We still hear people say, ‘Oh, it doesn’t matter if I vote, it doesn’t matter if I show up,’ and you follow that to its logical conclusion for most people and they stop showing up. In fact, 2014 was the lowest turnout of any statewide vote in our state’s history. The turnout was less than 30 percent of eligible voters. So, the idea that we are powerless to effect change in our own lives in things that matter to people regardless of their background or political affiliation is so harmful to all of us.”

Incumbency is a powerful force in U.S. politics, and the overwhelming evidence is needed by challengers to take down an incumbent.

Also, a lot of money. After Horn’s 2018 victory, the National Republican Congressional Committee (NRCC) designated Oklahoma’s 5th congressional district as a must-win for 2020. The NRCC is expected to flood the Oklahoma City media market with anti-Horn ads during the coming election season, and “dark money” organizations enabled by the U.S. Supreme Court’s “Citizens United” decision are funneling money toward defeating Horn. Additionally, Horn will face potential Republican challengers including State Sen. Stephanie Bice, R-Oklahoma City, and conservative businesswoman Terry Neese. Additionally, there is the phenomenon of straight-party voting, which will likely be a major factor with Trump topping the Republican ticket.

“Oklahoma has an epidemic of straight-ticket voting — people tend to go that way,” Day said. “Turnout will be up, so the key for Horn is to keep Democratic enthusiasm high so she can offset turnout on the Republican side, those straight-ticket voters who are going to want to vote for Donald Trump, make that one line and cast their votes.”

Alicia Andrews, chair of the Oklahoma Democratic Party, said the organization is throwing major support behind all Democrat candidates.

“Our first goal is retaining the 5th, because it is our only beacon right now,” Andrews said. “Additionally, we have been working all over the state. We have to recruit at the top of the ticket and all the way down, because a city council race can help a legislative candidate, which can then turn around and help a congressional candidate, and then it works the same way down, where a congressional candidate can get Democrats activated and engaged.”

In November, Trump’s campaign manager, Brad Parscale, pushed some internal polling saying that 45 percent of 5th District voters supported impeachment of Trump. Considering the district is still overwhelmingly registered Republican, it is not as great of a number as Parscale advertised. Horn said she does not believe that the district is the property of any person or political party, and will be back to knocking doors in the district in 2020, making every vote count.

“The reason I’ve held 10 town halls is because I know this is not my seat,” Horn said. “It is my job to do my best to be a representative voice and to listen and to build policies and laws that serve the greatest good for the greatest number of people.