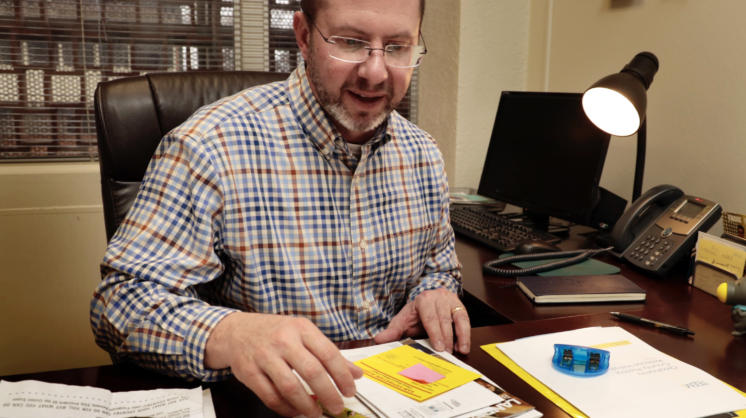 When Oklahoma conducted the largest commutation of nonviolent offenders in U.S. history, releasing over 500 individuals on Nov. 4, 2019, the former inmates were not just taken to the gate and told they were free to go. Because of efforts by Kris Steele, they had important tools to make their transition into society much easier.

“Department of Corrections removed a major hurdle for these folks trying to reintegrate into society,” said Gov. Kevin Stitt at a commutation hearing Nov. 1. “They worked to get driver’s licenses – stuff we take for granted – and state-issued IDs available before discharge. This was a major hurdle. We were provided with a very special grant from the George Kaiser Family Foundation [and] the Arnall Family Foundation along with The Education and Employment Ministry (TEEM) to make that all happen.”

‘Hundreds of kiddos will be reunited with their parents’

Steele, who serves as executive director of both TEEM and Oklahomans for Criminal Justice Reform (OCJR), was instrumental in lobbying for State Question 780, an initiative petition that called for the reduction of simple drug possession and property cases, to be retroactive.

“I would just tell you that it was a true moment of celebration and realization – that it’s not just the fact that these individuals have a second chance,” says Steele in his office at TEEM, 1501 N Classen Blvd. “It’s the fact that literally hundreds and hundreds of kiddos will be reunited with their parents. We’ve just taken a step forward in strengthening our workforce, and I think perhaps the most significant aspect of that is the realization that addiction is a disease. It is a health issue, and it ought to be treated as such.”

Steele began his criminal justice reform efforts while serving as Speaker of the Oklahoma House of Representatives, but his move into the private sector in 2012 helped speed the sea change at the state Department of Corrections. As a nonprofit executive director, he was able to speak more forcefully on behalf of Oklahoma’s prisoners without the danger of political reprisals.

Gene Rainbolt, founder and chairman emeritus of BancFirst and a longtime member of Oklahomans for Criminal Justice Reform, started observing Steele when the TEEM leader was a rising star in the state House of Representatives. He said Steele had an awakening during that time, realizing that “tough on crime” as a political gambit was a deadend for Oklahoma, and pointed out that Steele’s background as a United Methodist minister is key to understanding from where his morality originates.

“His motivation is absolutely pure,” Rainbolt said. “His whole life is dedicated to doing what Jesus would have done, and not just on faith. He’s a very compassionate man, a passionate, caring person.” 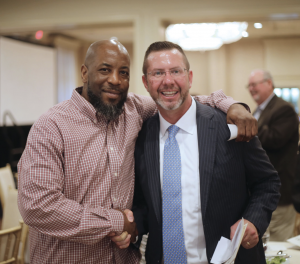 Kris shaking hands with Jimmie: Jimmie is a Reentry participant that was released in 2019. He works at the Renaissance Hotel as a chef.

600 percent rise in incarceration rate since the 1970s

Steele’s experience in the Oklahoma legislature provided a front-row view of how corrections policy is made in a state that has seen the incarceration rate rise 600 percent in the past 50 years. There are many reasons why this happened, and quite a few reasons why, despite Steele’s efforts and those of his allies in criminal justice reform, it continues.

Steele, who grew up in Ardmore and Broken Bow before attending Oklahoma Baptist University and making his home in Shawnee, said that the war on drugs that began in the 1980s – the “three strikes and you’re out” life sentencing that came to prominence during the Clinton Administration – combined with truth in sentencing laws and the rise of private prisons contributed to a kind of “prison industrial complex” that locked up more Oklahomans every year.

But Steele said that the most consequential event in the past half-century regarding the rise of incarceration in Oklahoma was the creation of the Oklahoma District Attorneys Association in 1973. He said prosecutors’ roles in lobbying the legislature for more offenses punishable by imprisonment has stymied real reform in the state.

“Prosecutors are opposed to meaningful reform, and I will tell you that they are very effective politically at the state Capitol,” he says. “They tend to speak in hyperbole, they tend to use outrageous anecdotes to scare people and protect the status quo. It is not OK; it is holding us back.

“I do believe prosecutors have found their political worth based on the number of convictions and based on the mindset of being tough on crime,” Steele says. “I do think it is incumbent on the people of Oklahoma to challenge that culture.”

Real change in Oklahoma, Rainbolt said, will come from people like Steele who can look at a problem with clear eyes that are unclouded by political posturing.

“It’s an evolutionary thing that has to happen,” said Rainbolt, who is widely known for his philanthropic work. “And there are so many things wrong that must be fixed. This a multi-year, multi-generational process.”

Rainbolt said that Steele’s conflicts with prosecutors over criminal justice reform will likely continue, but his mission and goals are resonating with Oklahoma residents, some of whom are interested in the fiscal savings achieved through commutation and reform, some of whom are swayed because of the movement’s moral underpinnings. That awakening among the citizenry, he said, is what will finally stem the “tough on crime” tide.

“I think the ‘winning over’ will come from the support of the public,” Rainbolt said. “They will have to come to understand that it’s bad public policy.”

The fight for female inmates

Despite political hurdles, Steele continues his fight, particularly in the case of female inmates. Since 1991, Oklahoma has ranked No. 1 in female incarceration, which stands at two and one-half times the national average per capita.

“In the past nearly 30 years, hundreds of studies have been conducted to try to figure out what is causing this epidemic of female incarceration in Oklahoma,” he says. “Certainly it’s not because the people in this state are somehow more criminogenic than the people who live in Arkansas, or Texas or Kansas or New Mexico and the rest of the nation.

“We almost have meta-analysis to inform us on what is driving our female incarceration rates, and the research concludes that the No. 1 cause is domestic abuse,” he says. “According to the Department of Corrections website, 69 percent of all the women in prison in Oklahoma are victims of domestic abuse.”

In addition to that data, Steele said there are several other “pathways” that account for most female incarceration. Unresolved trauma from abuse, untreated mental illness, self-medication and addiction play key roles. He said that many of these issues are co-occurring, with trauma leading to mental illness, which can result in self-medication that leads to addiction.

“Here’s the reality,” Steele says. “Oklahoma has the highest number of grandparents raising grandchildren per capita of any state in the nation. In every study that has been conducted to understand that dynamic, mass incarceration is the No. 1 reason. Being reactive and incarcerating people we’re mad at rather than discussing the core issues behind the behavior is making the situation worse.” 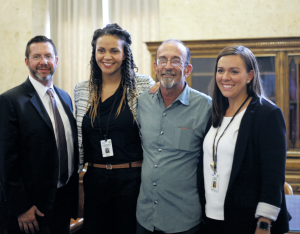 Many of Steele’s arguments stem from lower-case conservative values. He said it costs the state about $19,000 a year to incarcerate a low-level, nonviolent offender when that individual could be working and contributing to his or her community. This requires a radical reversal in how society views issues such as mental health and addiction.

“Individuals who struggle with addiction ought to be viewed as patients, not as prisoners,” he says. “There is no such thing as a spare Oklahoman. We cannot afford to throw people away or exclude individuals from participating pro-socially within our communities. Our communities are at their best, their strongest, their healthiest when everyone is able to contribute to the greater good.”