The Rich History of the OKC Farmers Public Market - 405 Magazine 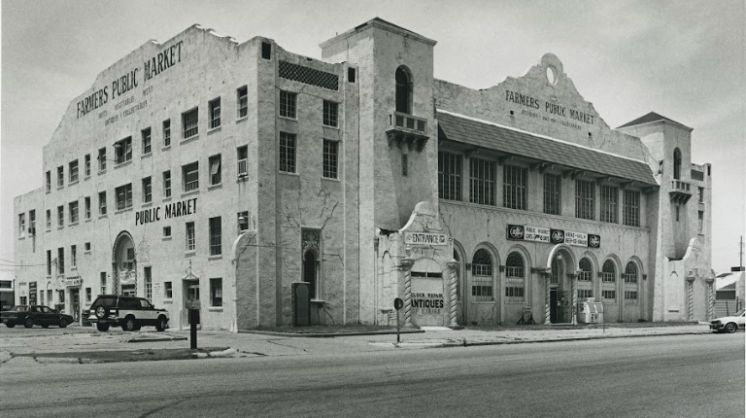 Burt and Jody McAnally have owned the Farmers Public Market since 2002, and they believe in ghosts.

However, the couples’ antiques mall manager, Bill Hogan, who is 91, has his doubts that the majestic 1928 building is haunted. The way he sees it, people associated with the property hang around so long that there’s a staffing shortage in the world of spirits.

“If it’s haunted, it doesn’t have very many people in charge of it,” said Hogan, who’s racked up 51 years with the enterprise on the southwest edge of downtown Oklahoma City.

The McAnallys bought the Spanish colonial revival art deco building from the grandson of John J. Hardin, an early Oklahoma City businessman who built it to be a farmers’ market on the ground floor and an events center upstairs.

Hardin built it on the site of Delmar Gardens, an amusement park that operated from 1903 to 1910. Burt McAnally said 1907 brought statehood and prohibition, and that played a role in the demise of the attraction, which was also a beer garden.

The market opened with 108 stalls, with booth rental costing 25 cents a day. Open-air stalls were added on the perimeter of the building in an effort to meet demand.

“This was a food hub. It was super popular,” Burt McAnally said.

The auditorium, featuring a 14,000-square-foot maple floor, often hosted concerts, dances and boxing matches. In the 1930s, the upstairs was used mostly as a roller-skating rink, and popular musicians were a big draw in the 1940s and 1950s. Merl Lindsay and his Oklahoma Night Riders, Bob Wills and the Texas Playboys, Little Jimmy Dickens, Hank Thompson, Hank Williams and Jim Reeves all graced the stage. Count Basie and his orchestra played there. Joe Louis never fought there, but he attended a fight held in the auditorium, Burt McAnally said.

“I just admired that building since I was a little girl,” Jody McAnally said. “We felt pretty passionate about bringing it back to its original glory.”

Carl Hart, maintenance manager and manager of the Saturday farmers’ market, is another longtime employee. He said the market is open every Saturday, year-round.

“Bringing back the Saturday farmers’ market to what it was meant to be was really special,” Jody McAnally said. “Carl has worked so hard. Every single vendor in there just loves him.”

Hogan said he and his wife turned the upstairs into the city’s first antiques mall starting in 1971. Then John E. Hardin, the grandson of the builder, asked him to be the market manager, a job he held for 20 years before the McAnallys came along and asked him to stay on.

Burt McAnally said he enjoys owning the building because “it has a story. It’s part of OKC’s founding history.”