The Rise of Founders Tower - 405 Magazine 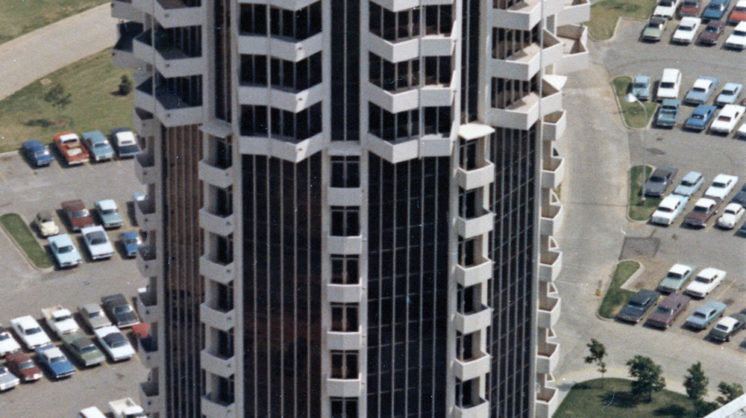 The 1960s was a decade of change – politics, music, hairstyles. Even architecture was changing. In 1964, the north side of Oklahoma City saw its skyline change significantly with the construction of Founders Tower.

The George Jetson-esque office complex, built in the architectural style known as Googie, was part of a new retail area located just west of May Avenue. A large department store called Founders Fair occupied the space where Best Buy and Home Depot are now located. Founders Bank also was nearby, but it was the 20-floor tower that got the most attention.

“Inside Founders Tower, it was much like any other building,” says Debbie Haffner-Caywood, who worked in the tower in the 1980s. “The offices did, however, have some odd angles. The outside offices had balconies, but we hardly ever went out onto them; they were small and had sort of an uncertain feeling.”

In addition to the offices on the upper floors, Founders Tower had a tailor shop and jewelry store on the bottom retail level, as well as the delectable Queen Anne Cafeteria.

“Queen Anne got a lot of our business,” Haffner-Caywood says with a laugh. “We rarely went to the cafeteria to eat, but we called for takeout. They had a small counter just outside the entrance where you would pick up orders. I especially loved their potato soup, which was on the menu every Wednesday.”

On the 20th floor reigned the Chandelle Club, one of a handful of restaurants throughout the country that revolved, giving diners a 360-degree view of 1960s-era Oklahoma City.

“I remember the rotating restaurant,” Haffner-Caywood continues. “Originally it was the Chandelle Club, and then Eagle’s Nest when I worked in the tower. I went a few times, but it was too pricey for me to go very often back then. The last time I was in the tower was probably around 1999. I left my job to take a teaching position in Piedmont and didn’t go back very often.”

In 2005, new owners launched a $50 million renovation to turn the dated office tower into a residential complex, quickly making it one of Oklahoma City’s most sought-after addresses. While the restaurant now atop the facility, 3Sixty, does not rotate, the views are still excellent.

“I have some wonderful memories of those days at Founders Tower,” Haffner-Caywood says. “My office was on the east side, so I had a perfect view of downtown Oklahoma City. It was such a unique building, and I am happy it has a new purpose.”