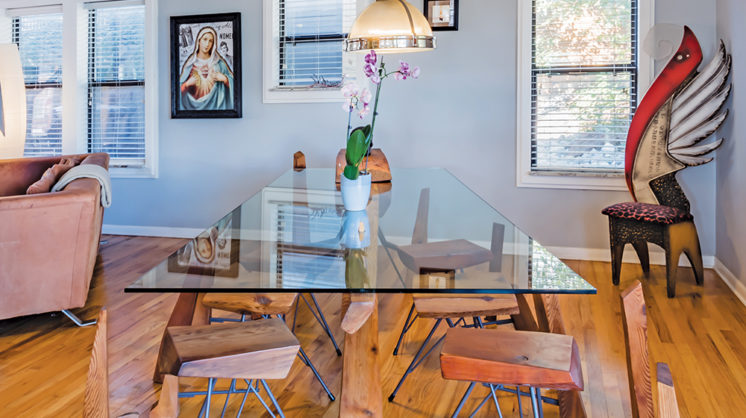 The origin story of Beth and Art Rutledge would make a fantastic novel, or even an exciting and brilliantly romantic, us-against-the-world, love-conquers-all type of rock ’n’ roll video. The couple met as teenagers in Austin, Texas. Beth was the adventurous private-school girl and Art was the handsome, public-school bad boy who’d stolen a hundred hearts, and showed no signs of slowing down.

“My BFF went to the same school as Art, and one day she and I were looking through her yearbook. I kept going back to a picture of Art. I felt drawn to it. I asked my friend who he was,” Beth Rutledge says. “She said, ‘Oh, God, he’s a bad boy, but the ladies love him,’ and she essentially warned me away. But another friend introduced us and we were inseparable after that.”

Beth’s family soon moved away, but she moved in with Art’s family. One day, as the couple was talking about their future, evaluating whether Art should join the military to help fund college, he turned and said to her, “We better get married.” And then, and this is the unabashedly romantic part, they decided to do it right then – and in those days in Texas, a couple could walk right in to the justice of the peace and be married.

So marry they did. The bride wore blue jeans and black Doc Martens, and the groom was similarly attired. Beth got a case of the giggles during the ceremony and was rewarded with a stern admonishment and quick lecture on the seriousness and sanctity of marriage. “And that was the start of our wild ride,” she says, laughing at the memory. “But it dawned on us that the next thing we had to do was tell Art’s parents.”

This year, Beth and Art Rutledge will celebrate their 25th anniversary, with their beautiful daughters Milan, 19; Alejandra, 13; and Lola, 4. They’ve made a home in Oklahoma City’s SoSA (South of St. Anthony) neighborhood, although the pair took up residence long before it was trendy or sought-after. They also own a business in Midtown – VICE Spirits, Wine & Beer, which is run by Art – and Beth has opened her own boutique communications company after a long career in marketing, having worked for one of the most prestigious law firms in the city for many years.

She now enjoys a bustling business, with a much more flexible schedule, allowing her to tend to her brood of young ladies and to develop her passion for vegan cooking. Her Instagram handle, @naughty.vegan, is filled with beautiful raw and vegan food and menu plans, and has the feel of a burgeoning lifestyle brand; perhaps she’s the next Pioneer Woman or Thug Kitchen creator. 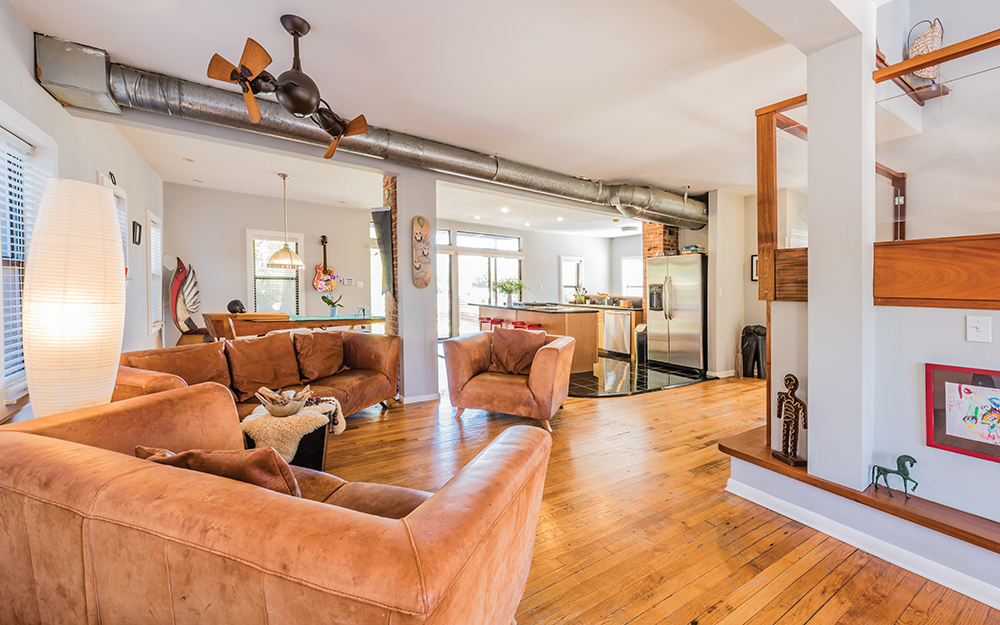 The Rutledge home is filled with light and art. The floors have been beautifully restored, and there are some 50 windows throughout, each fitted with a marble windowsill, a luxurious and beautiful custom touch.

It’s also enabled Beth to step in and help run the family business during Art’s recent illness. He was diagnosed with colon cancer last summer, but the (very) good news is that it was caught early enough to be mitigated with surgery. “Thankfully, he is now cancer-free,” she says.

Beth and Art were one of the first families bold enough to move into the SoSA neighborhood, and their home itself is a big reason for that. It was originally a four-plex, built in the 1920s, and had been purchased by Phil and Lisa Bewley, who were renovating it to create their dream home. “Halfway through the renovation, Phil was diagnosed with a brain tumor, so they hurried to finish the project so he would be able to live here before he passed away,” Rutledge says.

Nowadays, the urban lair, as she calls it, is filled with love and thoughts of a healthy future. Rutledge and her family have always felt the presence of the Bewleys, and their love for one another, throughout the home … but most specifically at a certain spot on the stairs. “I have always felt a responsibility to be worthy of this home. I told Tracey Bewley about the spot on the stairs, and she told me that her husband Rick built that staircase himself, out of mahogany, as a gift for his brother. I can feel the love there. This home was their love story, and now it’s ours.” 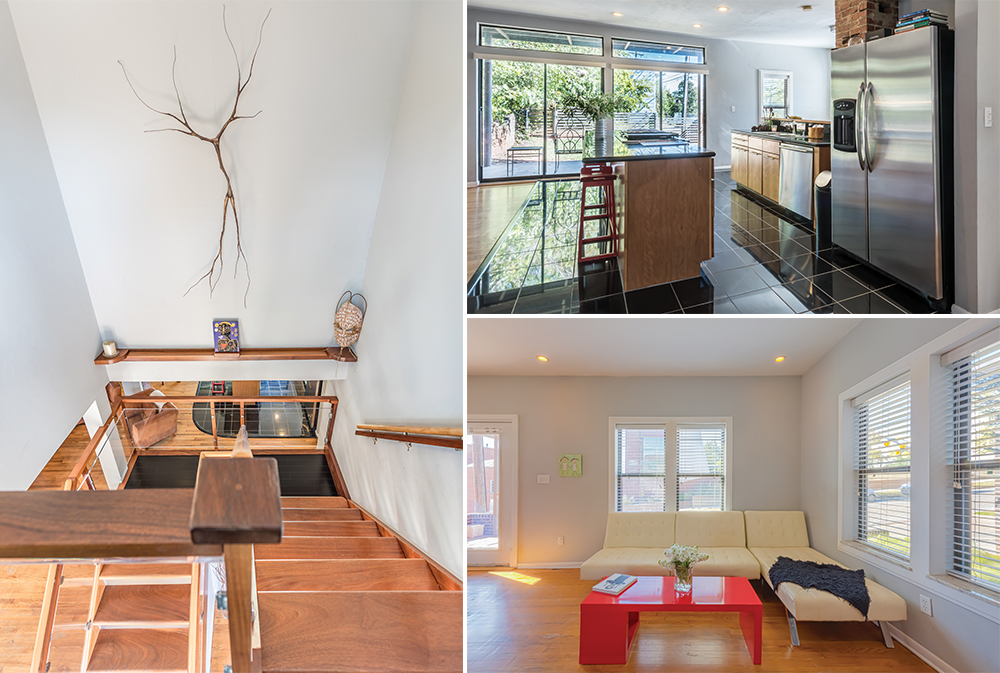 • Artist Rick Bewley built this beautiful mahogany staircase as a gift for his brother Phil, who along with his wife Lisa owned the Urban Lair prior to the Rutledge family. It is a lovely, sculptural centerpiece for the home.

• Here is where the magic happens: the Naughty Vegan’s workshop and studio, AKA the kitchen. Dry roasted tofu and cauliflower tacos, handcrafted veggie burgers, spiralized vegetable ‘pastas’ and lots of colorful salads make their debuts right here, before being happily devoured by whomever happens to be nearby, which may include Rutledge children, neighbors and friends.

• This little sitting area is tucked into a sunny corner on the first floor. It’s a coveted spot for reading, napping and daydreaming. The clean, simple lines of the leather sectional and red acrylic table marry harmoniously with the home’s old bones. 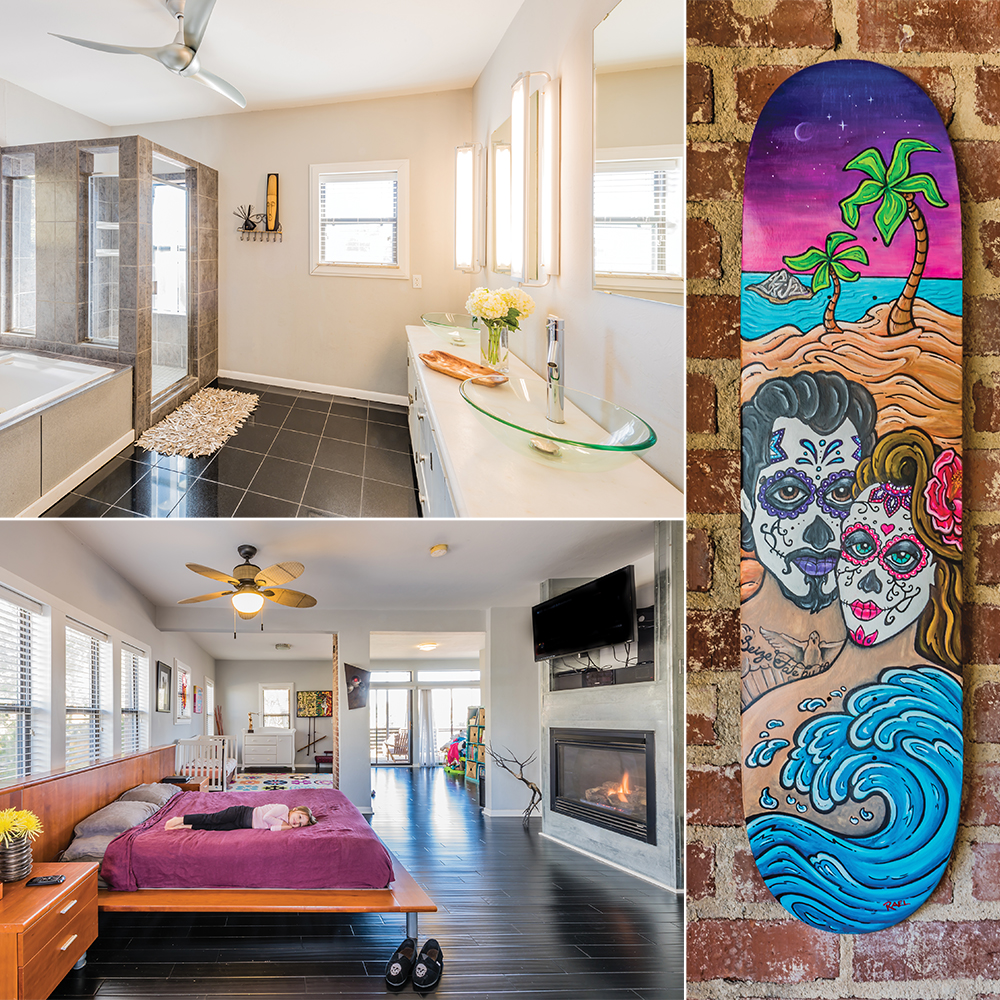 • One of the most sentimental pieces in the house is this skateboard, commissioned by Beth as a 24th anniversary gift to Art. It’s a recreation of a photo taken of the couple on Little Corn Island in Nicaragua, their favorite place. Each of the large stars in the sky represents one of their children, and there are 24 smaller stars, one for each year of their marriage.

• Lola, the littlest Rutledge, enjoys a rare treat: free rein over the television while lounging on her parents’ bed in the sweeping upstairs master suite.

• The master bath is minimal without being cold, and is well appointed with a spa shower and large soaking tub with a fantastic view.