The Saga of Spring Frog 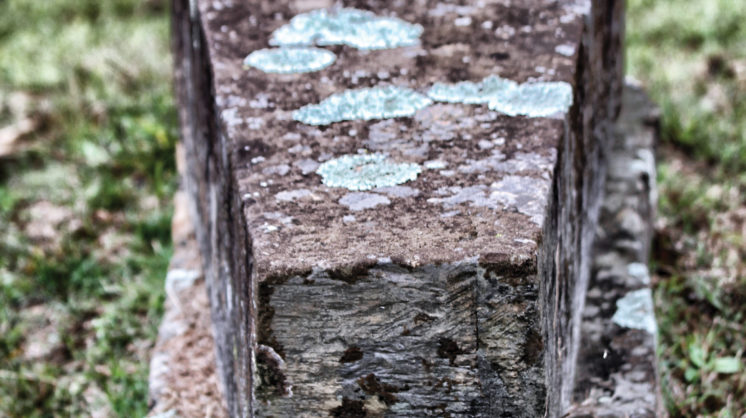 The massive gravestone was remarkable. So remarkable, in fact, that old-timers remember when it was featured as a source of national wonderment by “Ripley’s Believe It or Not.” Carved of native sandstone, the marker in a Muskogee County cemetery pre-dates Oklahoma statehood by nearly half a century. But it was not its age that astounded; it was its appearance: a man-size marker hewn from native sandstone to resemble a coffin.

The memorial marks the final resting place of the Cherokee leader Tooan-tuh. In English, he was known as Spring Frog. His gravestone references what may be the earliest known birthdate on an Oklahoma grave, pre-dating the birth year of 1758 inscribed on the Adair County marker of Chief Goingsnake (featured in our June issue).

Darkened with age and covered in lichen, its worn letters are carved in the Cherokee syllabary. The lettering, however, is difficult to read – and to translate. More than 50 years ago, Dr. T.L. Ballenger noted in The Chronicles of Oklahoma:

“Several people, versed in the Cherokee language, have visited his grave and studied the inscription … They agree that the name is not written in correct Cherokee characters, hence is difficult to translate with certainty … As nearly as the inscription can be translated, it reads:

A full-blooded Cherokee, Spring Frog was born at the edge of Lookout Mountain near Chattanooga, Tennessee, around 1754. The cabin where he lived has been restored and remains a focal point of a Chattanooga nature preserve named Audubon Acres.

The reference is to Spring Frog’s encounters with John James Audubon, the French artist and naturalist who came to America to chronicle its bird life. Although there was a 30-year difference in their ages, a friendship was said to have developed between the men. Audubon appreciated the insight offered by Native Americans, noting, “Whenever I meet Indians, I feel the greatness of our Creator in all its splendor.”

A renowned sportsman of his time, Spring Frog was celebrated not only for his knowledge of nature, but also for his skills as a hunter and trapper, his prowess as an athlete, his advocacy for peace and his ferocity as a warrior when he felt battle was the only option. 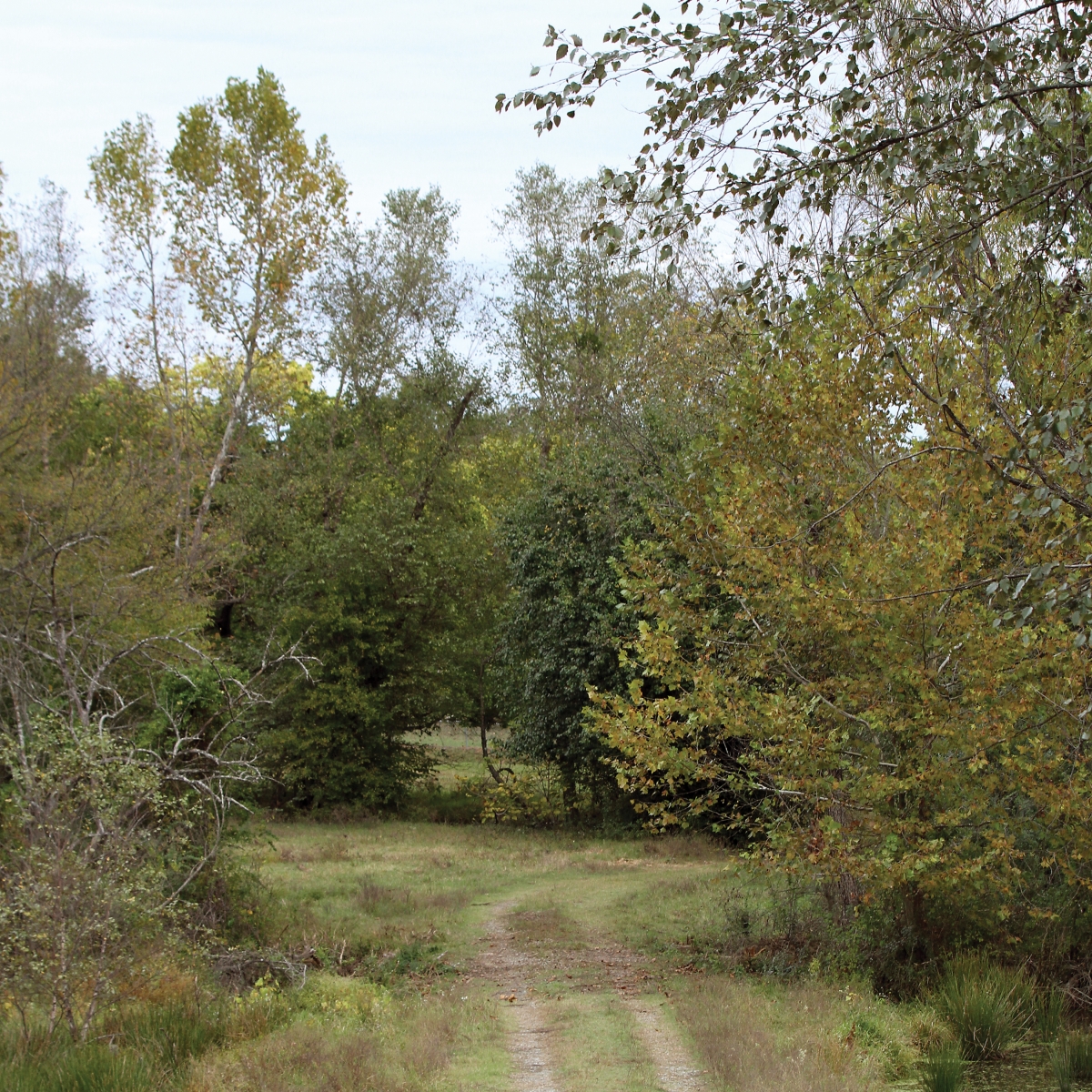 In Search of Spring Frog

The massive headstone is as difficult to find as it is to read. A crackled sign with fading green letters announcing the Briartown Cemetery stands near a fence post on a turnoff to a dirt road off State Highway 2. It dangles from twisted wires, lashed to a post fashioned from pipes. Rust stains mark where the old hangers held the sign before the holes gave way and new ones were drilled.
The road twists and turns through pastures and, after a couple of miles, comes to a dead end. What happened to the cemetery? 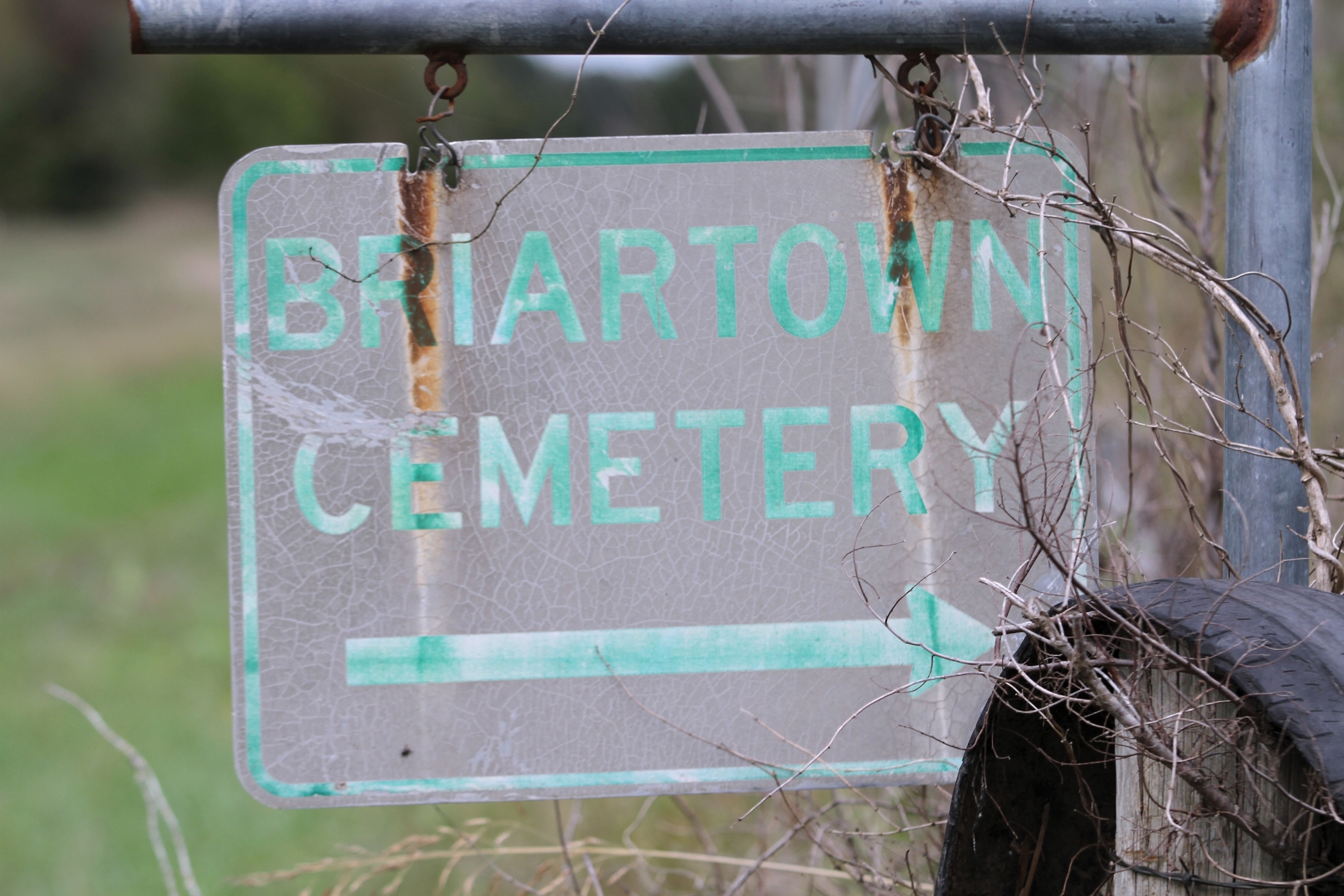 Fortunately, I meet some helpful teens who give more specific directions.

They peel off and I turn around again, parking near a gate blocking the grassy farm road. I take it on faith there is a cemetery somewhere in the pasture. I walk down the hill, across a creek and up another hill. The cemetery appears ahead.

It is not the small family graveyard I expected, but a sprawling plot with more than 300 graves, surrounded by a chain-link fence to keep away visiting livestock. The memorials range from ancient, unmarked stones and elaborately carved granite markers to gravestones just a few months old.

The grass is trimmed, arrangements of plastic flowers dot the graves and flags – mostly United States; but one, over the grave of L.W. Dobbs and his wife, Lucinda, Confederate – flutter over the graves of veterans. At the top of the sloping hill, overseeing them all, is the cemetery’s oldest grave: the weathered stone coffin marking the burial site of Spring Frog, born 265 years ago.

As an elder, he joined the Cherokee regiment that fought against the Creek in the Battles of Emuckfaw and Enotachopo Creek and of Horseshoe Bend with Gen. Andrew Jackson in the War of 1812.
He moved to present-day Oklahoma before the forced removal of the Trail of Tears with a group of Old Settlers including Di’wali, Sequoyah and Tatsi.

After his arrival west, he fought with the Osage near present-day Claremore in the Battle of the Strawberry Moon. An account notes: “Spring Frog, then 64, convened the council and was among those leading the pursuit. They surprised and burned the village, killed and captured 80 Osages, and destroyed all their provisions.”

He signed the Treaty of Turkeytown in September 1816 and, four years later, endorsed the first law passed by the Western Cherokee at Dardanelle Rock, providing for the appointment of a Light Horse company to preserve peace and order. He signed as one of the “Chiefs, Headmen and Warriors of the Cherokee Nation.”

Spring Frog turned to farming in his new home in Briartown and represented the Cherokee in a delegation to Washington, D.C. in 1838. There, he had his portrait painted by the artist Charles Bird King, and his image became part of a gallery in the Smithsonian Institute of more than 100 oil paintings of tribal leaders who had visited the Capitol.

For another two decades, Spring Frog lived peacefully in the new Indian Territory. His death came on the last day of August 1859, when he drowned in the Canadian River. Reported age: 105.
In an effort to honor his life, an impressive marker was chiseled and stacked three levels high on a knoll in Briartown Cemetery, two miles north of the river where he breathed his last. In territorial days, Judge I.B. Hitchcock of Vinita praised it as “a most singular monument, such as I never saw before.”

After the land surrounding his original Chattanooga cabin was made into a nature preserve in the years after World War II, an effort was made to re-inter Spring Frog’s bones near the place of his birth. But he remains in Oklahoma, at rest beneath a monument as remarkable as the man himself. 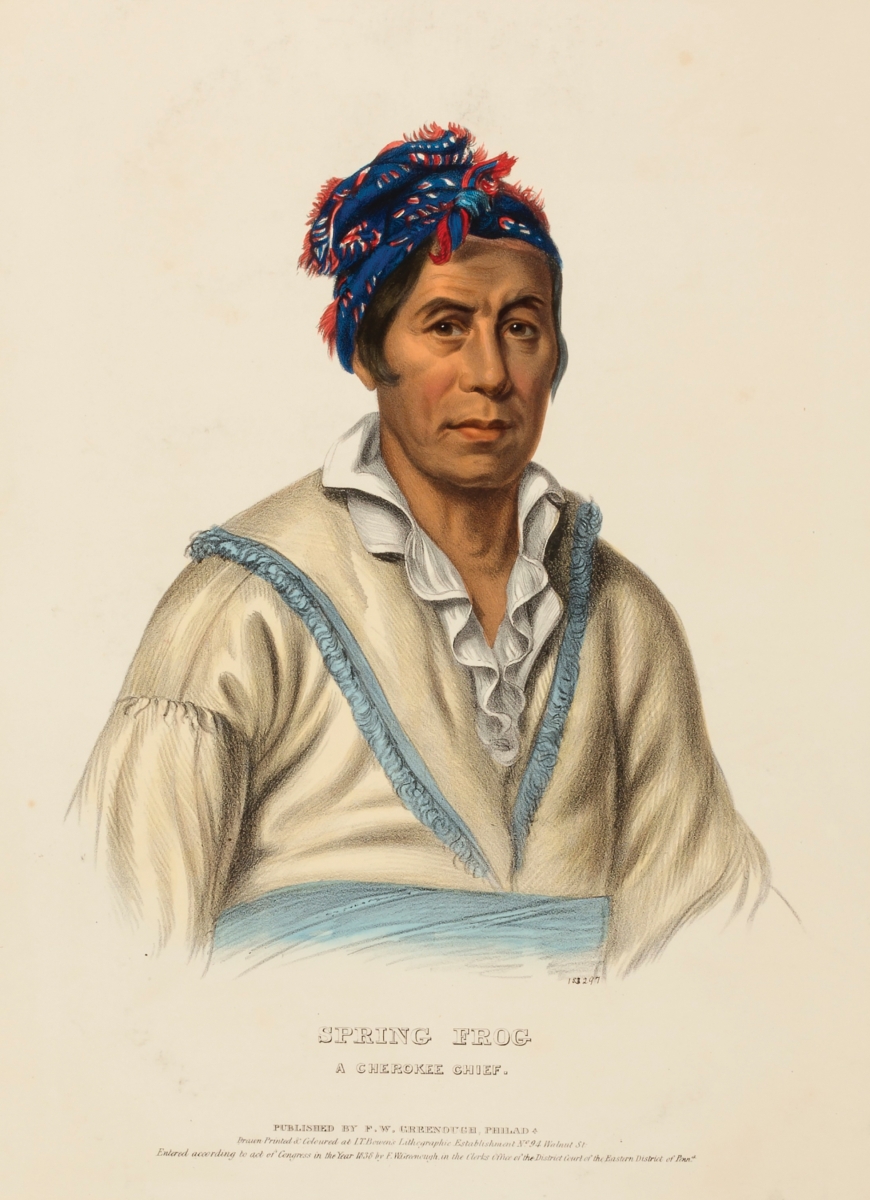 Lithograph based on original portrait by Charles Bird King. Published in History of the Indian Tribes by Thomas L. McKenney and James Hall, Vol. II (Portfolio of Portraits of Indian Chiefs, Published by Rice and Clark, Philadelphia, 1842).