The Sound of Music in the OKC Metro - 405 Magazine 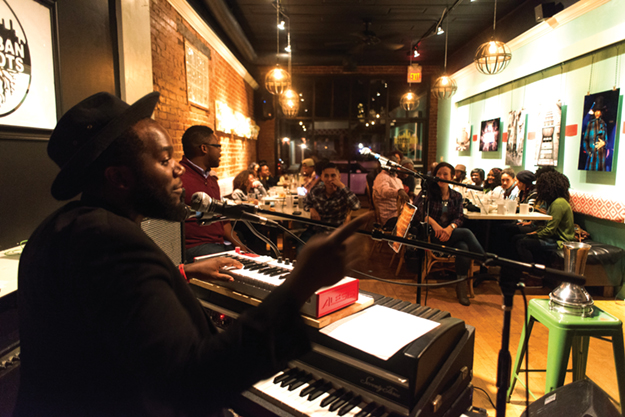 The Procession Of Holidays And Holy Days Marches
Through Our Lives Every Year As Fall Turns To Winter.
The Annual Parade Of Pomp And Excess Starts With Halloween, Plumps Itself Up Like The Game Bird Of Choice At Thanksgiving And Builds To A Crescendo Of Consumerism Culminating With Christmas. It’s A Time Of Joy, Reunion, Laughter And Memory Making. Or Perhaps That’s Angst, Sorrow, Remorse And Heavy Drinking
(Or Heavy Drinking And Then The Remorse).

Whatever your leaning, love ’em or hate ’em, the holidays are here. If you are looking to escape the madness or take your family house party out on the town, there is music in the merry air. We cornered a cadre of local music aficionados at the Academy of Contemporary Music at the University of Central Oklahoma (ACM@UCO) in their Bricktown offices during our quest to define local music and identify the best places to find it.

While Oklahoma’s second-largest city has its signature “Tulsa Sound,” the state capital’s role in the music world is less clearly defined. This is a function of geography as much as anything, according to Scott Booker, executive director and CEO of ACM@UCO. “Oklahoma City is a crossroads,” he says. “Place matters. If you’re a hub and a place that’s easy to stop, things are going to happen.”

Mitch Bell, ACM@UCO’s program director, music performance, expands on Booker’s thought. “It’s a melting pot of all kinds of sounds,” he says when asked to pinpoint an Oklahoma City music style. “There’s not one style or sound, really.” Not that there’s anything wrong with that. It’s just the result of being a conveniently located oasis.

Regardless of the reason, the metro’s musical past and present has plenty to offer. If you need to wriggle free before that boorish uncle fouls the air with more braggadocio or if you just want a change of scenery for a while, there is a style of music to accommodate your reason for personal escape this holiday season. 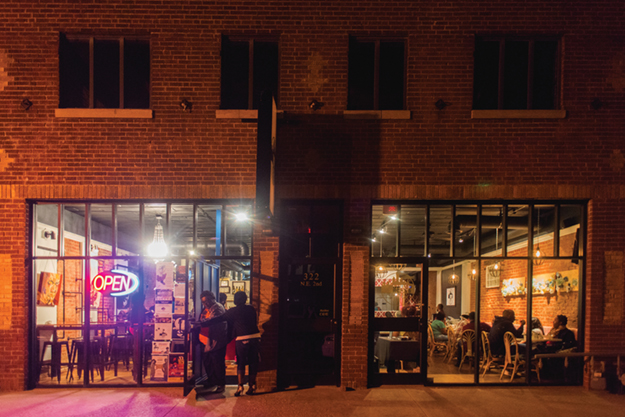 For musicians traveling the south-north route from Texas to Chicago or the east-west route from Atlanta to Los Angeles, Oklahoma City represents a logical stopping point on the map. The minstrel influence had a significant impact on jazz music, says Chris Hicks, program director of production at ACM@UCO. “Early modern jazz is tied to Deep Deuce,” he explains. “Early jazz players from Kansas City came here to play.”

Those musicians invariably crossed paths with New Orleans-based Dixieland jazz artists, and two distinct musical styles merged somewhere near the current crossroads of I-40 and I-35. The traveling troubadours took their shows back on the road out of town, but the metro marked the spot where jazz music from two regions met for a one-night stand. You can still enjoy the happy results of that fateful union in the Deep Deuce neighborhood and elsewhere.

Check Out Your Local Jazz Hands At These Locations 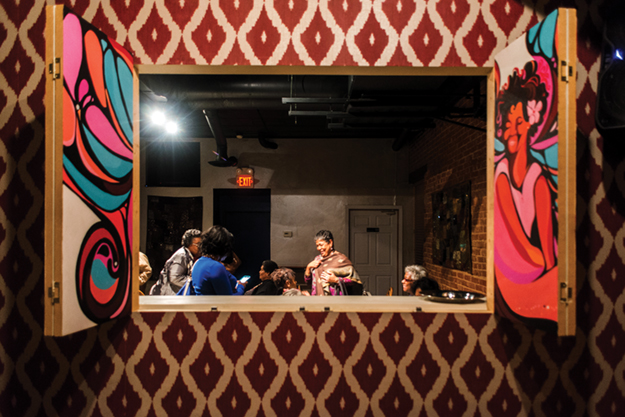 Get some good down-home grub while you get your groove on at this Deep Deuce locale. Live music is featured every Friday and Saturday, and there is a First Sunday Jazz Brunch each month. Locally born, raised and trained, nationally acclaimed act Adam & Kizzie stop by on occasion to share their blend of R&B, hip hop, neo-soul and jazzy bluesy goodness. The Oklahoma City kids recently signed a deal with Rope-a-Dope records. Crooner Cooki Turner belts out acoustic soul and R&B material here on a more regular basis. Check the website for the most current entertainment schedule. 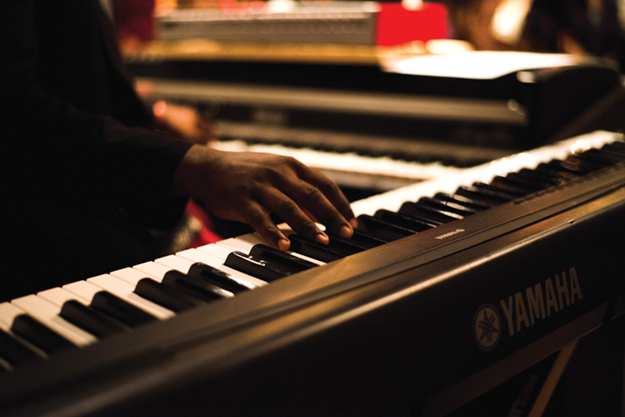 You can hear your choice of jazz along with a variety of other acoustic and plugged-in players, sometimes free of charge. Ticket prices for higher profile acts are extremely reasonable, and the Jazz Lab offers live performances several nights a week. Two shows featuring Oklahoma City acts are scheduled to appear over the yuletide fortnight. Miss Brown to You offers up a little bit of everything on Friday, December 19, and if you can still find some pep in your step on January 2, party down with the solid R&B, soul and funk flavor of Shortt Dogg on the first Saturday of 2015.

Six Strings and Songs to Sing 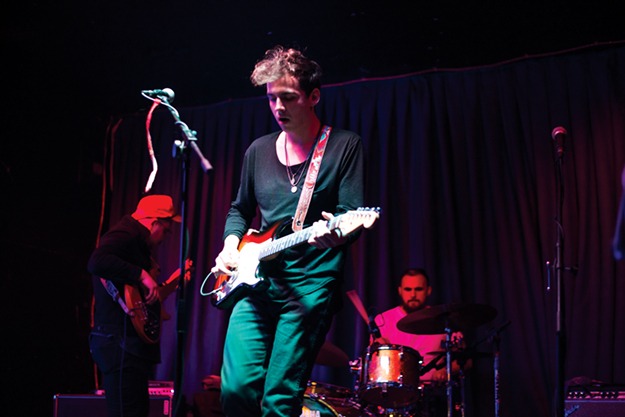 Armed only with a guitar, minimal acoustic accompaniment and tales to spin, singer-songwriters adroitly blend the arts of strumming and storytelling. Sharing experiences and observations ranging from the intimately personal to the acutely political, these entertainers bring audience members along on their journeys through life.

Although the folk and protest music heyday arguably passed by the early 1970s, the singer-songwriter style has enjoyed a long-running renaissance since the indie movement took hold in the late 1990s. As the home of Woody Guthrie, one of the country’s most revered folk songsters, the continuing popularity of the singer-songwriter segment across Oklahoma is no surprise.

The fare offered by singer-songwriters sometimes gets lumped carelessly into the category of “easy listening.” While the atmosphere of their performances is more laid-back than an amped up rock ‘n’ roll set, the tunes and tales they bring to the table challenge the audience to think. Often with a lone instrument to support them, the lyrics have to be strong enough to stand on their own. How many people, as adults, still think of Guthrie’s anthem “This Land Is Your Land” as a children’s song?

Central Oklahoma provides ample opportunity to sit back and enjoy your choice of talented singer-songwriters. Sink into your thoughts – and theirs – at a lounge 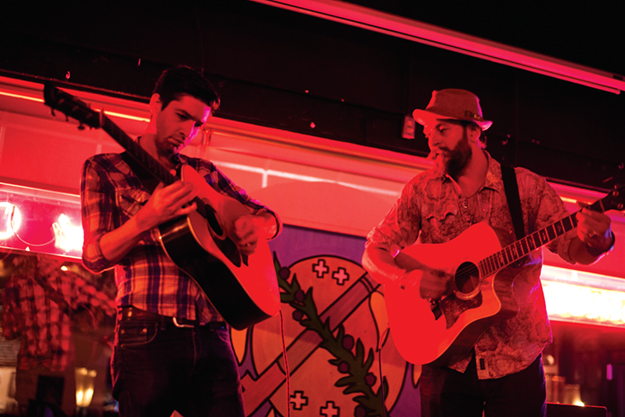 The Blue Note has been in the live music business since 1951, and the beat goes on. Specializing in blues and jazz, the singer-songwriter sect has a home here as well. Live acts are usually booked from Thursday through Saturday. Aspiring vocalists can rehearse their favorites during Wednesday’s karaoke dustup. Cheap drinks and an eclectic crowd make it an inviting destination. If it’s not your scene, at least it won’t cost you much to find out. December’s live music lineup was not available at press time, so check the website for upcoming events. 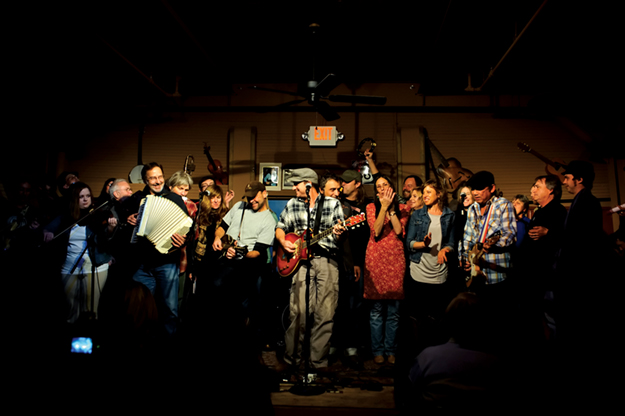 If you had to peg one definitive, guitar-driven sound that emerged from the central Oklahoma crossroads, you would likely settle on “red dirt” music. Although Texas has laid its own dubious claim to red dirt, the genre’s unofficial birthplace is right up the road in Stillwater. OSU Cowboy country isn’t home to every red dirt rocker out there, but enough of them emerged from Payne County to legitimize its claim of ownership. So keep your paws off, Austin.

Red dirt defies the straight country sound of the Grand Ole Opry set, too, so Nashville has no dog in this fight, either. Perhaps in a nod to the crossroads culture that continues to influence the local sound, red dirt is sometimes hailed as Americana, a label that comes off as a tad too quaint and not a little dismissive. If Seattle can claim grunge, why can’t Stillwater claim red dirt?

At the risk of plagiarizing Donny and Marie Osmond, red dirt music can best be described as a little bit country, a little bit rock ‘n’ roll. Some acts might skew more toward the country end of the spectrum, some more toward rock and others somewhere in between. Red dirt is definitely not bluegrass or rockabilly, but you might catch a glimpse of them here and there. Think John Mellencamp meets Ryan Adams, with a splash of Wilco. Throw in Stevie Nicks as the prototype female backing vocalist and you get a feel for the sound. But that’s about as close as you can get to pigeonholing it.

Local red dirt icon Cody Canada, quoted on the website of his current band, The Departed, says, “The two things that drive me are love and hate.” Consumed without the benefit of context, the Yukon native’s quote can sound bleak and a little extreme. Taking his musical talents and roots into consideration, Canada’s words fall into place. Red dirt music spans the divide between country and rock ‘n’ roll, blues and bluegrass. The lyrical subject matter runs the gamut from storybook romance to soul-wrenching heartache. Put it all together and you have a sound that unites the musical cousins of rock and country and verbalizes the feud between competing emotions. Red dirt music is more concept – or context – than cliché. You feel it more than you hear it. 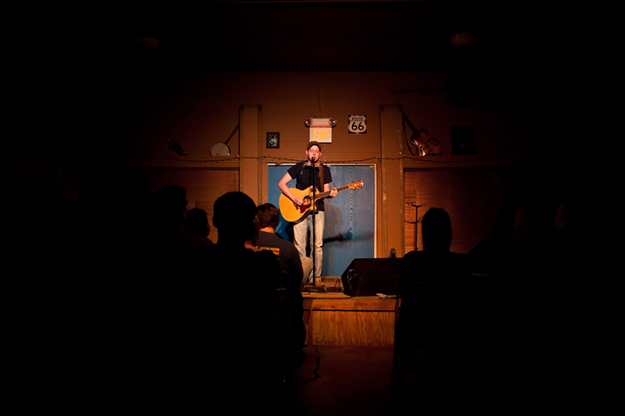 Billing itself as “the best listening room in Oklahoma,” this venue has been attracting top local, regional and national acts for over 20 years. If there’s a sound of choice here, it’s anything resembling Oklahoma music. Blues, bluegrass, folk, country and rock are typically on the menu here, but alcohol is not. The Blue Door is a BYOB establishment (wine, beer and non-alcoholic drinks only). On Thursday, December 4, Mama Sweet celebrates a CD release party here. The Norman-based group gives listeners a taste of red dirt, country and rock. The product satisfies the appetite for good tunes.

Despite the disgusting moniker, the Wormy Dog Saloon welcomes quality acts like, well, like a wormy dog hosts parasites. Local and regional talent takes the stage here two or three nights a week. Ticket prices are modest, as is the décor. Fortunately you’re here for the audio and not the ambience. If you’re in the mood for some rocking red dirt, be on the lookout for authentic Stillwater red-dirters Chad Sullins and the Last Call Coalition on their next pass through town. In the meantime, take in some Red Eye Gravy on December 19. The Tahlequah troupe technically touts itself as “cowpunk” while others put it in the alt-country or Americana category. Either way, if you’re ready for some locally inspired rock, you won’t be disappointed.