The Taste of Adventure - 405 Magazine 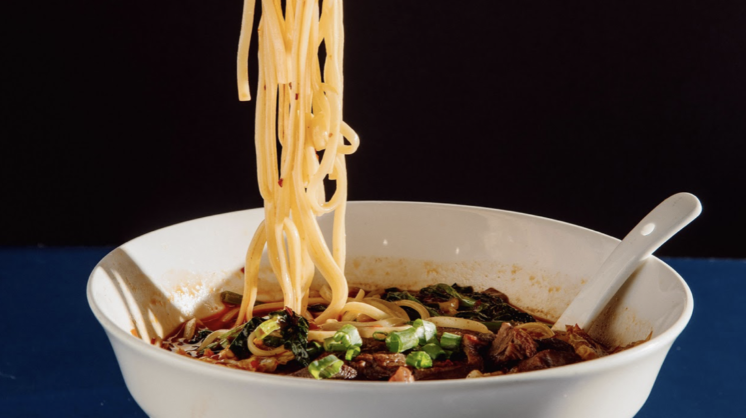 Now that that’s out of the way, we can look into the world of – not foodies, thank you – but those who will dine on anything … adventurous eaters. Everyone who has raised a child knows that at some point between 4 and 6 years of age, that child will fixate on a dish or meal to the point that when you ask, “What do you want for dinner?” the answer will remain unchanged for months. “Chicken nuggets, French fries and ketchup!” or “Cheese pizza!”

True story: I knew a California law enforcement veteran who ate a pancake sandwich at the same diner every morning for 15 years.

Then there are the polar opposites. Likely you have a friend – or you are the friend – who will try anything “weird” on a menu. Sometimes it works out; sometimes it does not. That’s adventurous eating. Going to a place where you feel slightly concerned for your safety: adventurous eating. Indian food in a truck stop: adventurous. Ordering things you can’t pronounce … you get the idea.

To suss out opportunities for adventurous eating in the 405, we have taken three approaches: We asked four people to speak very specifically about a district or ethnic cuisine; we asked industry professionals to recommend a restaurant or a dish; and we built a list of 10 things to get you started on your own adventure.

Chaya Pennington Fletcher has been in hospitality most of her professional life, as server, manager and owner, among other jobs. She’s an operating partner in Kindred Spirits on NE 23, and she lives, works and eats in the district.

“The one place I eat most often is Carican Flavors,” she says of the Caribbean restaurant at 2701 N MLK. “My go-to is the curried goat. Combined with plantains to balance the spicy with sweet, and spinach rice, it’s the perfect meal.” 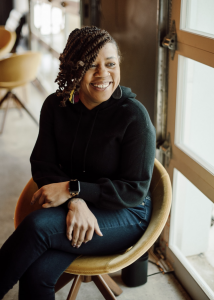 The northeast community adjacent to downtown has a few well-known eateries: Fletcher recommends yam-fried chicken at Florence’s, 1437 NE 23, and Guy Fieri spent a few moments raving about it when he was in the city last. She also said she’d be doing the community a disservice if she didn’t mention the fish and chips at Ice Events Center and Grill (1148 NE 36).

Geronimo’s Bakery and Burgers (1817 N MLK) and Polk House (2319 N Lottie) aren’t as well known outside the district, but both have phenomenal food.

“Polk House is the rare place in OKC to have pork neckbones, and they do a chicken-fried lobster tail, too,” Fletcher says. “Geronimo’s has always had amazing donuts, but their burgers are delicious. Ask them to ‘Geronimo it’ and they’ll add fried shaved ham.”

Emma Dean Kratochwill is the executive director of La 29, the district that runs from Shields to S May along SW 29, so, yes, she has some of the 405’s best Mexican food in her district.

“Birria is gaining in popularity everywhere,” Kratochwill says. “Especially the tacos, but I still like traditional birria, like the goat birria at Los Desvelados” – that’s Taqueria Los Desvelados at 1516 SW 29. 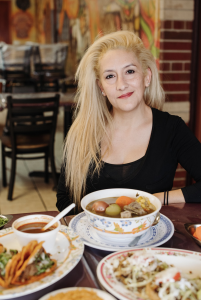 The dish, a tradition in northern Mexico, features seasoned meat served in stock with fresh tortillas, sauce, onions, etc. Make your own tacos or just use the tortillas to scoop. 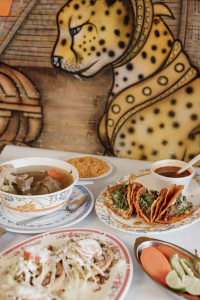 For something farther off the beaten path, consider an unusual possibility at 641 SW 29. “Cueritos at Crudoolandia are for the truly adventurous,” she says. “They’re pickled pork skins, and they are challenging.”

A little funky, a lot chewy, cueritos really are graduate-level adventurousness. A beer on the side, vinegar and chiles help.

Before getting too excited, it’s fair to point out that eating soup, even soup called pho, is not adventurous. It’s soup. Once you get past the embarrassment of asking for colonialist silverware, you’re eating delicious soup. 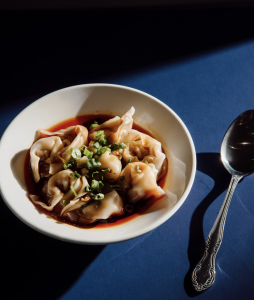 Jenny Nguyen is the operating partner at Lee’s Sandwiches at 3300 N Classen, and she knows the district better than most locals. We talked about Vietnamese food beyond pho, and the first dish that came up was thit kho to, or clay pot pork.

“That’s the dish of every Vietnamese kid’s childhood,” Nguyen said. “It’s my comfort food, and the one at Lido [2518 N Military] is delicious.” 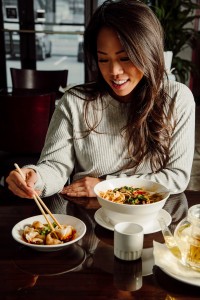 Lido has a delicious version of clay pot pork, as well as numerous other Vietnamese specialties, and Nguyen also recommended dishes from Lee’s, including nem nuong (roast pork spring rolls) and bun bo hue, pho’s spicier cousin. The recipe for the latter is Nguyen’s mother’s, who didn’t actually start making it until she arrived in the U.S. in 1985. And, yes, this version has the gelatinized pig blood, but you can ask for it without.

There were immigrants from Lebanon in Oklahoma before statehood, so their food has always been found in abundance around the state, even in small towns. Greg Gawey has owned Jamil’s Steakhouse at 4910 N Lincoln since 1977. He bought it from his uncle, who opened it in 1964. It’s the last Lebanese steakhouse in the 405, and one of only three left in the state. 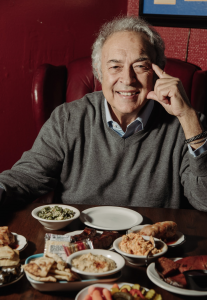 “There are only two places I really go to get Lebanese food in OKC,” Gawey says. “I get the combo plate at Mediterranean Deli” – 5620 N May – “because I get cabbage rolls, kibbeh, tabouli and hummus. And then there’s the hashwa at Nunu’s.” (It’s on our starter list below.)

Kibbeh is a meat dish usually made with bulgur wheat or another grain. Traditionally, it’s served raw (kibbeh nayyeh), baked or fried, and all are legitimate expressions of the dish. Some are made with lamb, but beef is common. 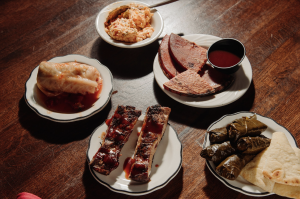 As for food at Jamil’s, Gawey is happy to point out that you can get steak, chicken-fried steak or ribs, and still get that taste of Lebanon. “We serve tabouli, hummus, cabbage rolls and grape leaves, so you can get a little Lebanese with your Americana.”

“I’ve been loving Ling’s Cakery (2723 N Classen), especially the egg tarts and the strawberry dump cake.” The latter is not adventurous, but it is fantastic.

Sieg loves the larb, a dish we’ve covered in the magazine, from Four J’s Diner at 2920 S Agnew. It’s a staple dish in Laos, and one that doesn’t get nearly enough love in OKC. 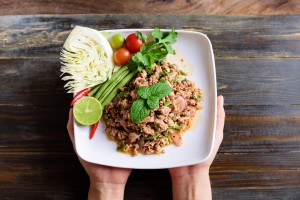 “Anything from C’est Si Bon in Edmond. I usually get the crawfish etouffee.” This is high praise coming from a man who makes stellar etouffee himself, but the kind found at 308 W Edmond is superb.

“I like the fried pork chops at the Prince Hall store at NE 27 and Kelly, and everything at This Iz It.” For the latter, delicious fried chicken and waffles are the first thing to try at 2831 NE 23.

“The chicken korma at Tandoor, the Indian food restaurant inside the truck stop (at 1901 E Reno). It’s the best korma I’ve ever had.” Pro tip: everything here is delicious.

Jay Iaquinta, consultant-operator. “The noodle bowls at Szechuan Story (2800 N Classen). My son Judah gets the liver and pig blood bowl and eats every bite.” If you don’t know about pig blood in Vietnamese food, that’s advanced-level adventurous eating, but you also can get it in the bun bo hue at Pho Cuong, 3016 N Classen.

Tacos de buche at Carnitas & Tacos El Tarasco, 2635 SW 29. Best not to ask what it is before you try it, because once you taste it, you won’t care.

Chicken hearts at Goro Ramen + Izakaya, 3000 Paseo. It’s a skewer of hearts, and just know they are amazing.

Nihari at Sheesh Mahal, 4621 N May. A traditional Pakistani dish that Oklahomans will love because it’s super tender beef.

Lamb ribs at Black Walnut, 100 NE 4. With chimichurri, so perfect.

Hashwa at Nunu’s, 3131 W Memorial. Honestly, this should be on the city’s must-eat list.

Yemsir Watt at Queen of Sheba, 2308 N MacArthur. One for the vegetarians, but seriously, this lentil dish with berbere sauce is mind-numbingly delicious.