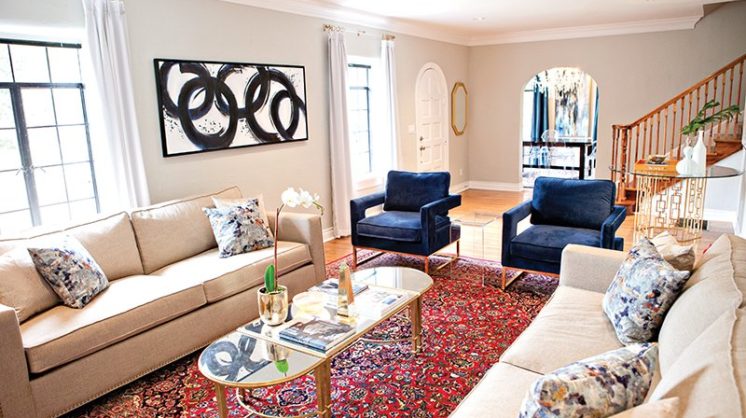 A love of historic homes runs in Clay Taylor’s family, and his wife Becky loves them just as much as he does. While Clay’s parents, Marnie and Clay Sr., live in Edgemere Park – their opulent Christmas décor was featured in 405 Magazine’s December 2016 issue – the younger generation is a bit closer to the Capitol in Lincoln Terrace.

“This house is it for us,” Clay Jr. says. “I’ve loved Lincoln Terrace all my life. I learned to swim at the Faculty House, and to me there was always a mystique and charm about Lincoln Terrace, up on a hilltop. I work at the Capitol a lot, so this location is perfect, and we’ve got a beautiful park right across the street.”

The park’s importance became evident not long after the couple bought their home in March 2016: “We found out we were expecting five days after we bought the house,” Becky says.

Good location … not quite perfect condition. Becky laughs, “When we bought the house, you could roll a marble downhill on the floors.” They took several areas of the home down to the studs, and added a half bath downstairs. Upstairs, the room that is now the nursery initially had no interior entrance, so that had to change. Other improvements included closing off an exterior door on the east side of the home, and turning a careful eye to maintaining the historic charm by preserving original arched doorways and adding new ones where appropriate.

The home was built in 1927, and occupies a spacious corner lot in one of Oklahoma City’s oldest historic neighborhoods. The Taylors had begun their house search the previous autumn and were specifically looking for a three- or four-bedroom space, because Clay, a lobbyist, works from home.

Becky, who is the senior director of development for Infant Crisis Services, knew she wanted the home to be colorful, as well as something a little different. “We already had our Persian and Moroccan rugs, which are family treasures, and the chandelier. We wanted the house to have a modern twist, but still have the bones of an historic house,” she explains. 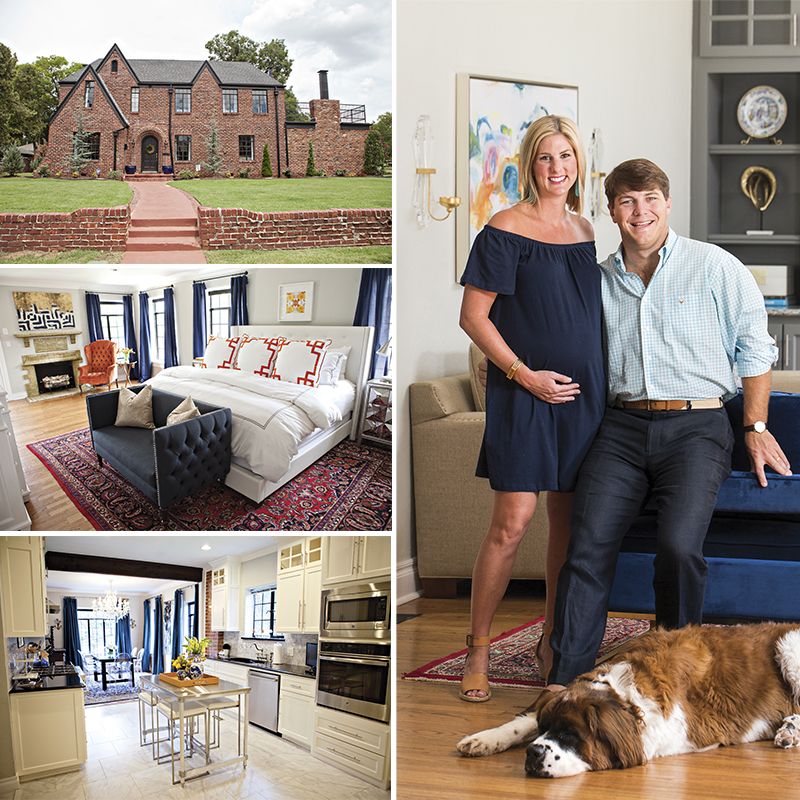 • Becky, Clay and Samson, shortly before the arrival of Josie.

• Exposed brick adds visual texture in the kitchen, which underwent significant renovation. A dark wood beam between the kitchen and dining room is a further nod to the home’s age and stature and pairs charmingly with the latter’s chandelier. Blue and white ginger jars filled with cheery yellow flowers add warm pops of bright color.

• More blue and orange in the master bedroom lend order to the home’s eclecticism, and an original fireplace with unique gold tile is the clear focal point. Becky’s orange chair sits fireside. Lush white bedding with enormous pillows trimmed in a vivid orange meandros border motif stand ready to cradle a napper. Although with the arrival of baby Josie, grownup naps may well be on hiatus.

• The Taylors’ stately home commands a spacious corner lot in historic Lincoln Terrace, a neighborhood just south of the Oklahoma State Capitol born in the decade between 1920 and 1930. Many of the homes were built in the 1920s by the prolific builder/developer G.A. Nichols, and many notable Oklahomans have called the enclave home – including Sen. Robert S. Kerr and Gov. Roy Turner, who both lived in more than one home in the neighborhood. Architecture in Lincoln Terrace ranges from Colonial to French and Spanish styles.

With the help of interior designer Kellie Hefner, the home is transformed. It’s perfect for a young family; it’s bright, airy, cheerful and slightly regal. Just in time, too, as the Taylor duo became a trio in October. Baby Josephine “Josie” Louise made her entrance a bit early, but other than giving her parents a scare, she’s perfect.

Of course, there is also a fourth member of the family who deserves his very own paragraph. The house shakes when he walks into the room, and his penchant for dramatic and prolific drooling helped Becky choose easy-care, washable fabrics throughout. “He” is the mighty Samson, a massive St. Bernard puppy that Becky surprised Clay with.

In decorating, the couple found that they had two pretty distinct styles to merge. Becky grew up in a home that was more minimalist. “We had nothing on the counters,” she says. Clay, on the other hand, grew up in a maximalist household, in which every inch of space houses a work of art, a framed photo or a bit of beautiful bric-a-brac, and where layers of classic patterns and fabrics reign.

“Kellie just did a wonderful job,” Becky says. “She captured our styles and our love of mixing high and low. We love it.” 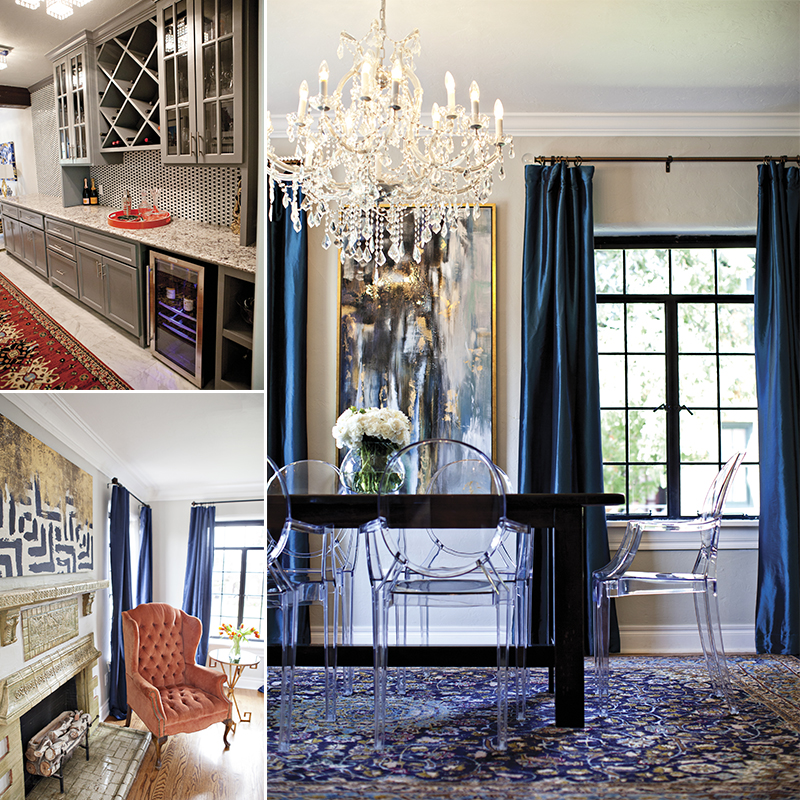 • A quick step from both Taylors’ home offices is the well-equipped bar. Plenty of wine storage is custom-built, as is the taupe-gray cabinetry. Graphic black-and-white tile, vintage barware and a Moroccan rug complete the room. Bubbly, anyone?

• Lucite chairs add modernity and whimsy to the Taylors’ dining room. Another heirloom rug, this one in shades of regal navy blue, has determined the palette for the rest of the room. Again, the pair has embraced their signature mix of old and new, high and low. “The house is the antique, and we’ve given it a modern lease on life,” Clay says.

• An original fireplace with unique gold tile is the clear focal point of the master bedroom, with Becky’s orange chair sitting fireside. 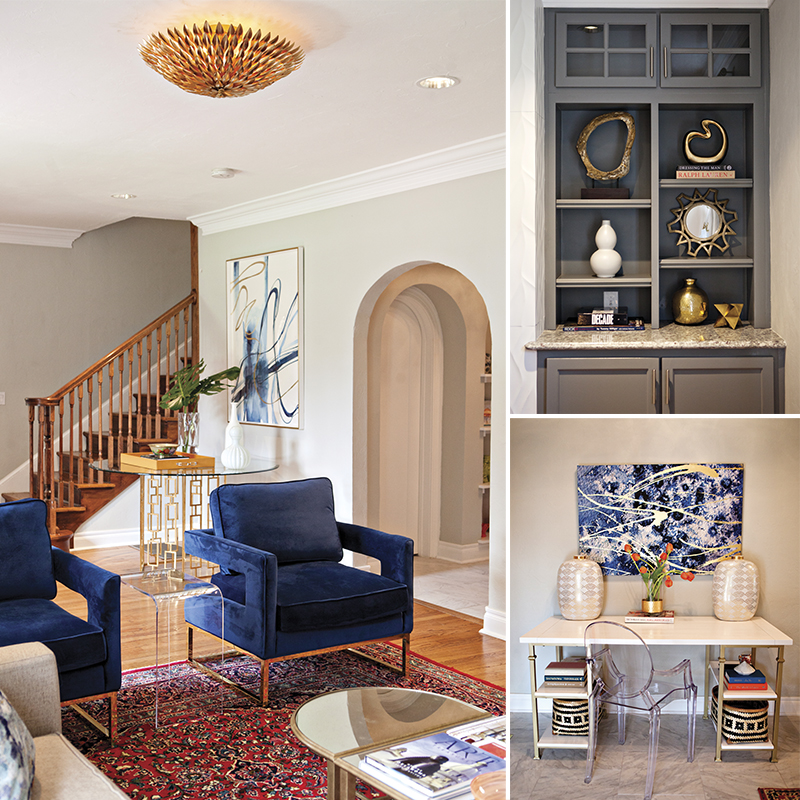 • Scattered throughout the house on tabletops, shelves, night tables and really, any free surface, is Clay’s prodigious collection of artful coffee table books. He’s been collecting them since his college days, and has always had a distinct eye for design. “I like pretty books,” he explains, with a smile. “When I met Clay, he had the nicest room in his fraternity house, with a beautiful coffee table and coasters,” says Becky.

• Clay’s home office is a vast, masculine space located on the east end of the house, but Becky’s spot is a petite alcove tucked into the downstairs hallway between the living room and the bar area. The dining room’s Lucite seating is repeated here, as are the home’s overarching colors of blue and orange. Peppy baskets hide office necessities, and symmetrically placed vases contrast merrily with a bold abstract painting above. 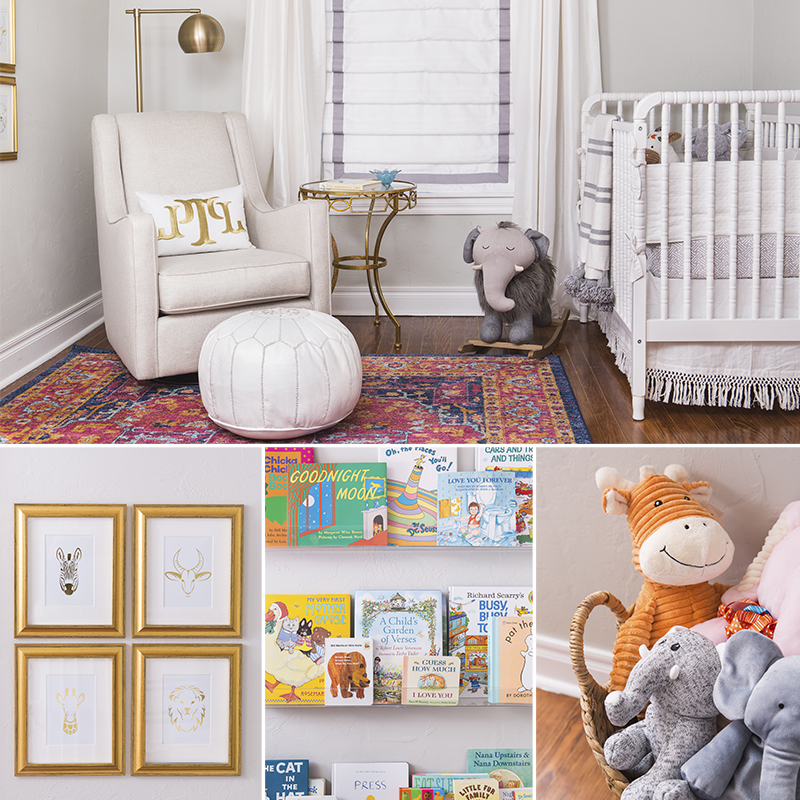 • Josie’s nursery is at once peaceful and playful. Another beautiful rug from the couple’s collection warms the floor, and a comfy chair and pouf make late night feedings less of a chore. A herd of friendly animals keep little Josie company, and her growing library doubles as art, displayed covers-forward on clever wall shelves.