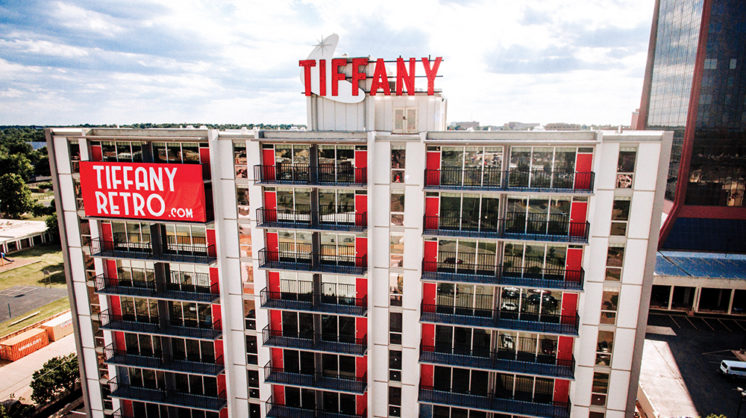 Back in 1966, Nancy Sinatra’s go-go boots were walking all over the place. The mini skirt was the current thing, and “Bonanza” and “Bewitched” were among the top-rated shows on television. Here in Oklahoma City, the northwest side was booming with new residential and commercial business.

Near the intersection of Northwest Highway and May Avenue, residents saw the opening of a swanky new apartment building. When its iconic red neon letters flickered on for the first time, “Tiffany” became the hot new property.

Through the years, however, time took its toll. The 12-story complex fell into disrepair and closed in 2012. But the old building still had plenty of life.

“Renovations began in December 2016,” says Cyndy Hoenig, publicist for The Tiffany. “The exterior was preserved and looks today almost exactly as it did in 1966. To accomplish that, we removed an addition in the front of the building, which revealed the original concrete canopy with the mosaic tile columns.

“We completely remodeled the existing tower and installed new plumbing, electrical, heating and air,” she says. “We also added new floor-to-ceiling windows, which expose the commanding views of Lake Hefner and the downtown skyline.”

Ferguson Property Group, which owns the complex, added even more amenities to its $25 million facelift. On the back of the property, they installed a raised deck with a saltwater pool, as well as an entire new building of luxury units.

“The Tiffany has some unique amenities, which would have been unheard of in 1966,” Hoenig says. “We have EV charging stations for electric cars, an automated package locker system for receiving UPS or FedEx deliveries, and we even have an automated mini-market where tenants can shop for snacks or grocery items 24 hours a day.”

It also has a theater room, along with a dog park and dog wash facilities, bike storage and an extensive exercise room. There’s a sauna, tanning booths and a resident lounge, as well. All units are serviced by elevators and each has its own private balcony with extensive city views.

“We made a real attempt in the building to reflect the mid-century modern design,” Hoenig says. “The iconic red, neon Tiffany sign has been dark for years, but it has been fully restored and people can see it brightly lit as they drive down Northwest Expressway.”

“This is a real throwback to the 1960s, but with all of today’s comforts,” Hoenig says. “It is a thrill to be able to save a piece of the city’s history and bring it back to life for new generations.”