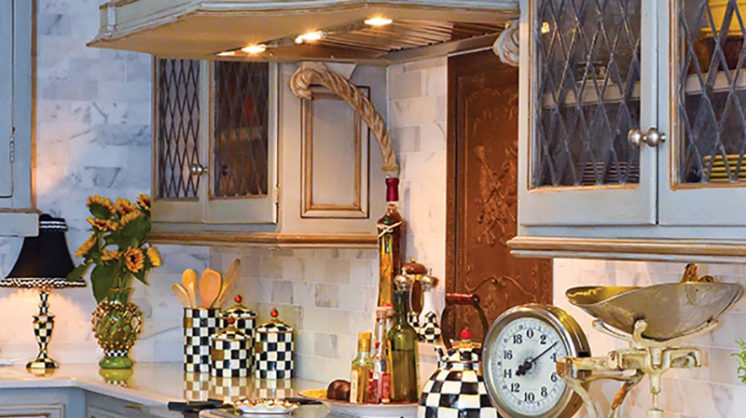 Comfortable living areas, cozy bedrooms and multiple bathrooms are all very nice, but it’s just not a home without a well-equipped kitchen.

The most popular room in the house takes center stage Oct. 18 in a tour of Nichols Hills residences organized by the Oklahoma County Medical Society Alliance – so if you’re planning a remodel or are just hungry for inspiration in design and décor, visit the five homes on the tour to get an inside look at marvelous combinations of form and utility in the vibrant hearts of these beautiful residences.

Tour chair Berna Goetzinger explains, “The kitchen tour has become a tradition of the Alliance, and its biggest fundraising project,” and that organizers “are grateful to have such an amazing fundraiser that people can enjoy and at the same time raise money for hardworking nonprofit organizations.” In previous years, the tour proceeds have been awarded to two beneficiaries, but Goetzinger describes Alliance members as “proud and thrilled” that this year will add a third: the Mental Health Association Oklahoma, the Oklahoma Mothers’ Milk Bank and Health Alliance for the Uninsured.

The 24th annual tour is self-guided, and includes a Starbucks coffee bar and raffles at each home, as well as cooking demonstrations from the pros at The Culinary Kitchen, 7222 N Western. Bon appetit. 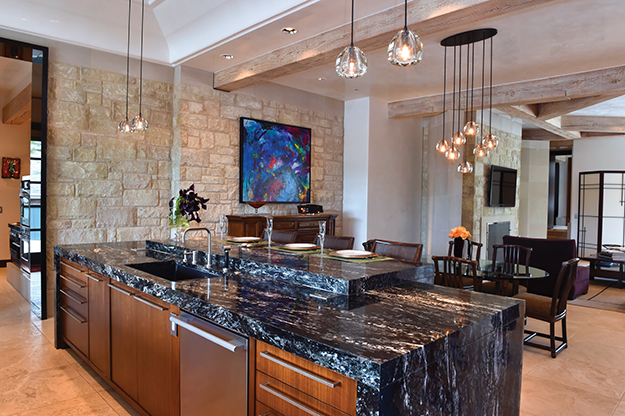 The design of this spectacular space was a collaborative effort of designer Jim Frazier, builder John Gilbert and homeowners Leigh Ann and Paul Albers. Barbara Quillian Fine Interiors supplied all the furniture, lighting fixtures and accessories. The lines of the cabinets, drawers and built-in shelves are sleek and minimal, but the materials – walnut trim, creamy tiles, glossy granite – are warm and rich, making an overall effect that’s simultaneously welcoming and grandly impressive, allowing artwork and decorative elements to pop. And the glass walls give the owners a spectacular view of Grand Boulevard Park while imparting an almost gallery feel; like a display in an exhibition of fine design. The oversized kitchen islands house an Ilve stove, sink, dishwasher and refrigerator drawers under the granite (the result of quite a bit of work from Young Brothers, who doubled its thickness). There’s even a second kitchen space in an adjacent pantry that serves as a prep area for entertaining. One tour house each year is designated as a representative for a major sponsor; even among the beauty filling this year’s tour, it’s not difficult to see why the Albers residence is the 2015 Integris home.

Originally built in 1954, this home belonged to Ryan’s grandparents for more than 50 years. Ryan and Jessica decided to renovate here instead of building a new house – so it’s a true family home and a special place to raise their children. They did, however, get Terry Carlson’s help to entirely redesign and reconstruct it from top to bottom, including eliminating the formal dining and living areas. The large island is functional for prep and cooking, but also integral to the group atmosphere while entertaining with family and friends, and Jessica loves being able to cook while still being a part of everything.

Modern and transitional designs are on display throughout this newly constructed home, built by AC Dwellings with much input from the owners. Seda cooks all of the family meals and really enjoys the two sinks, secret prep areas behind sliding doors and drawers that open with the slightest touch or kick … but most of all, she loves having her two daughters sit at the huge island for front-row seats to the culinary action. 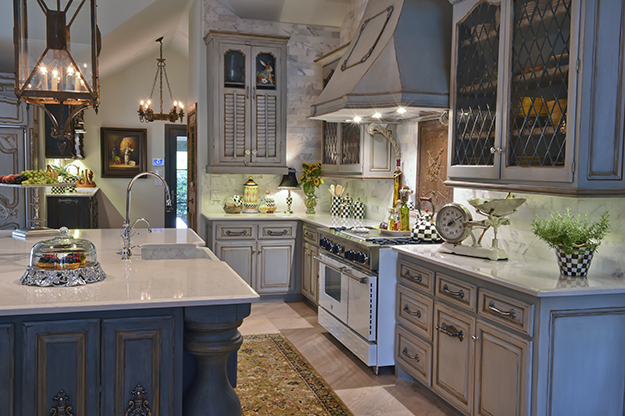 Built in 1958, the Stones’ ranch-style abode had small rooms and low ceilings until a remodel from AC Dwellings raised the kitchen ceiling, removed some interior walls and helped make the house feel much larger and more open. The transformation adds new life and emphasis to the kitchen, most of whose appliances and features are concealed so as not to interfere with the flow of the home and beauty of the open living and dining space. (The massive reclaimed armoire on the west wall that houses the refrigerator is a classic Anders and Terry Carlson touch.) Display fronts on the cabinets show off the contents, but the windows themselves are the stars; they’re real leaded glass and are the sole remaining element original to the house. The remodel was so successful that Michael now says his favorite part is “everything.”

This house is a total remodel taken down to the studs by contractor Rex Massey, with a finished look courtesy of designer and decorator Jennifer Welch. Sunlight bathes the kitchen from two directions and gleams off the oak, Caesarstone quartz and bronze pendants. The modern equipment – including slam-proof cabinets and drawers and a Sonic ice machine – combine with the overall radiance for a sophisticated and welcoming ambience.

See the Sights
The OCMS Kitchen Tour runs from 11 a.m.-5 p.m. on Sunday, Oct. 18. Tickets are available at the door of each home for $20 on the day of the show, but you can find a discount by visiting ocmsalliance.org for ticket locations, and more information by calling 496.6217.