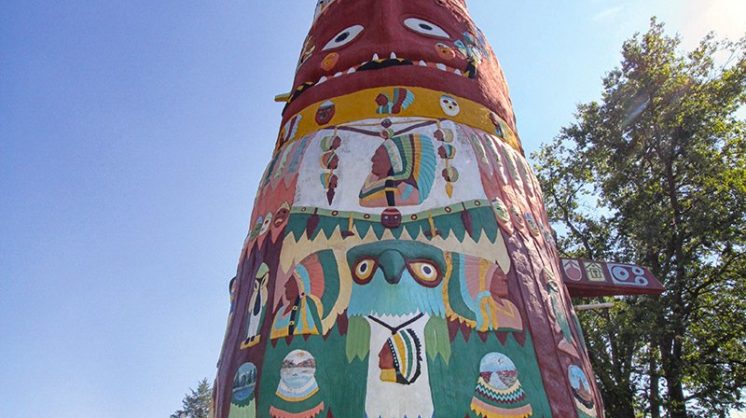 The centerpiece of Ed Galloway’s Totem Pole Park is a 90-foot cone that took 11 years to build. It is made of red sandstone, hollow inside, framed with steel and wood, and covered in a thick concrete skin, rising from the back of a bright blue turtle with pink-rimmed eyes.

For a quarter-century, Galloway – a self-taught artist and retired wood shop teacher who worked at the orphanage at Sand Springs – devoted his spare time to creating a folk-art sculpture garden on his lawn in Foyil.

A veteran of the Spanish-American War, he was inspired by Asian art glimpsed during his time in the Philippines, postcards from around the world and images from National Geographic magazines. From 1937 to 1961, a Seussical landscape sprang up around the stone house he built, transforming the property into a wonderland of decorated picnic tables and gate posts, an 11-sided Fiddle House to display the violins he made and a collection of colorful concrete towers in the style of totem poles, emblazoned with brightly painted bas-relief designs of American Indians, stylized birds and oversized fish.

His work inspired mixed reactions. The story goes that even his wife, Villie, once teased him with a variation of Joyce Kilmer’s poem: “Totem poles are made by fools like thee, but only God can make a tree.” In response, he built her a 12-foot-tall tree trunk of concrete, complete with holes for birds to nest.

After his death in 1962, Galloway’s work went unmaintained and began to deteriorate. But his creations were resurrected by the Rogers County Historical Society, the Foyil Heritage Association and the Kansas Grassroots Arts Association.

The site, four miles south of Route 66, was restored and added to the National Register of Historic Places in 1999. The National Park Service now calls the park “the oldest and largest example of a folk art environment in Oklahoma.” Today, signs pointing the way boast that it is home to the world’s largest totem pole. 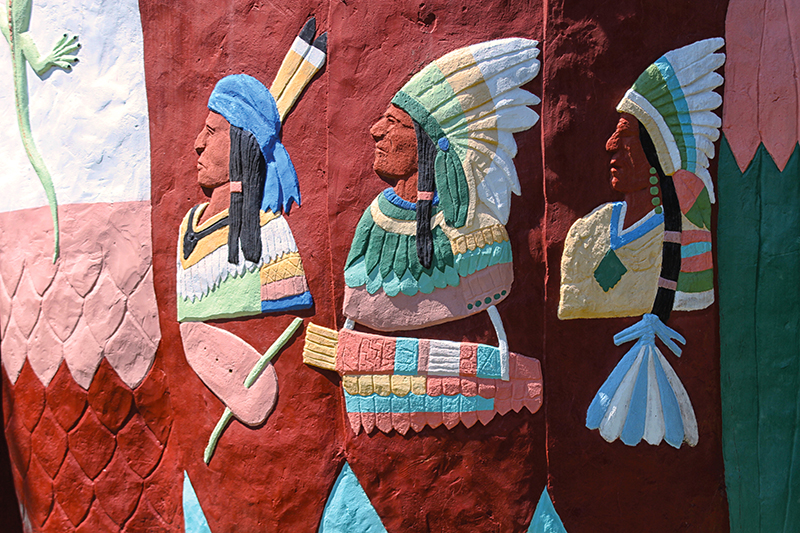 FACT CHECK: It is not. The battle for the totem pole supremacy is serious business, a matter of great debate and civic pride in the Pacific Northwest. Aficionados are specific about what type of structure qualifies as a totem pole: It must be made from a single piece of wood, created by indigenous artists using traditional tools to carve and paint symbols recounting history, legends or lineages of clans from the coastal areas of Washington, British Columbia and Alaska.

While monumental, Galloway’s creation meets none of these qualifications, and also is half the height of the tallest totem pole in the world.

That honor goes to the “Spirit of Lekwammen,” a 185-foot carving created from a 500-year-old red cedar tree by a team of 11 First Nations artists and presented as a gift to the people of Canada. It was unveiled as part of the 1994 Commonwealth Games, and installed in the Inner Harbour of Victoria, British Columbia.

Recognized by the Guinness Book of Records as the world’s tallest, the totem pole was dedicated on Aug. 4, 1994 – and stood for just over 1,000 days before being dismantled when its height was declared a hazard to seaplanes. The pole was cut into four sections, with 40 feet of it remaining behind while the remainder went on display on the Songhees Indian Reserve.

The title of tallest extant totem pole reverted back to the massive 173-foot-tall carving installed in Alert Bay, British Columbia. Created in the 1960s by chief carver Jimmy Dick and dedicated in 1973, it stands next to the traditional Big House at the north end of Cormorant Island.

But not everyone accepts the Alert Bay claim to totem supremacy: It was constructed not from a single log, but from three sections telescoped together. 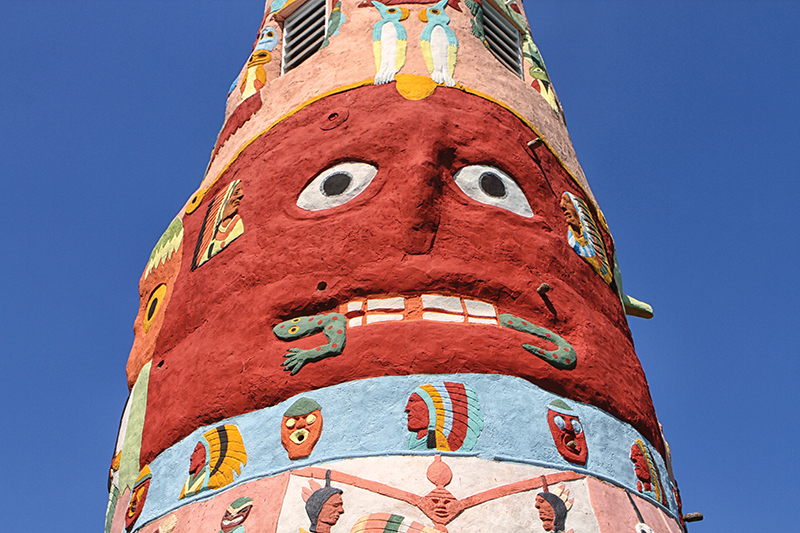 Another pole claiming to be the world’s largest but disqualified by purists was carved in 1961 by Californians Ernest Pierson and John Nelson. It was fashioned from an old-growth redwood, with additional pieces attached. Planted in concrete in McKinleyville, California, the pole measures 144 feet, 8 inches – although supporters like to include its non-traditional concrete base and now-dangling copper lightning rod with antennae on top to claim a total height of 160 feet.

The 57,000-pound pole, with no aspirations to tribal affiliation, was created as a tourist attraction for the grand opening of the McKinleyville Shopping Center. As part of his promotional efforts, Pierson also published a 1962 book called My Story, by the McKinleyville Totem Pole. The structure, now riddled with several holes in rotting sections, also has its own Facebook page.

The town of Kalama, Washington, boasts a totem pole created from a 140-foot-long piece of western red cedar. Carver Don Smith had hoped to display the work at the 1962 Seattle World’s Fair, but did not finish in time. The work of Smith, who declared his Oklahoma-born mother was part Cherokee but held no tribal membership, has stood for more than 50 years near a playground on the riverbank of the Columbia River, and is now included in the logo of the Kalama Chamber of Commerce. In the 1970s, the artist was adopted by the Kwakiutl tribe, and began using the name Don “Chief Lelooska” Smith.

For years, the consensus winner of the tallest totem sweepstakes was the village of Kake, Alaska, home to a 137-foot-tall traditional pole carved by Native artists from a single piece of wood and installed at a potlatch ceremony with the blessing of elders.

Kake certainly wins the prize for best backstory: In 1926, the villagers, then in the Territory of Alaska, were pressured to abandon traditional ways and embrace the future. Elders wept as the community’s totem poles, misinterpreted as pagan symbols, were felled and destroyed in a bonfire. For generations, Kake mourned the loss of its history.

Forty-one years later, the town rallied to design a monumental pole to represent all of its clans and reaffirm its cultural roots. The community selected and cut a tree, barged it to a worksite and assembled a team of artists who carved and painted it over a span of 88 days. Elders blessed the new creation, and the nearly 14-story-tall pole was shipped to Osaka, Japan, for Expo ’70, returning to Kake for installation and dedication on Oct. 1, 1971.

It stood on a bluff overlooking the sea for 44 years. In April 2015, however, a strong wind snapped off the top of the world’s tallest totem pole. The town is now considering its next move.