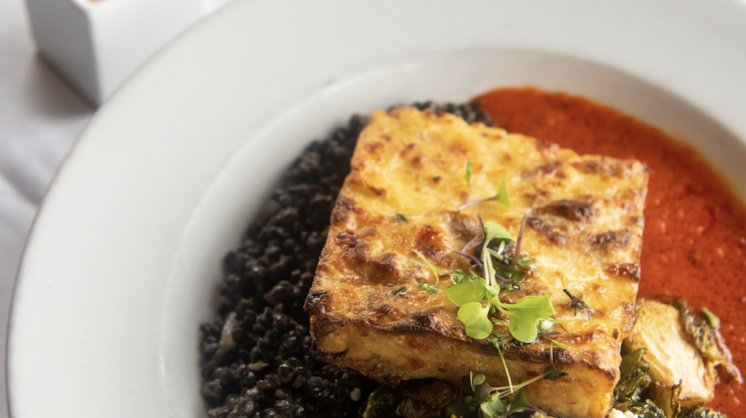 One of the tests of childhood was learning to love vegetables, with the implicit message that embracing adulthood meant at least eating vegetables rather than hiding them in the leg of the dining room table or surreptitiously feeding them to the dog.

Oklahoma City has been slow to embrace vegetarian and vegan cuisine, but the opening of a new crop of restaurants with thoughtful, intentional, creative plant-based options indicates that we may have finally arrived at adult palates, which is to say, a palate that appreciates good food irrespective of its component parts.

A Spring Bowl of gorgeousness from the Loaded Bowl

Substantially ahead of the curve was The Wedge Pizzeria, 4709 N. Western Ave., which opened in 2007, a time when vegetarian options were rare, usually consisting of steamed broccoli or a salad, and vegan fare was an urban legend. Elena Farrar, the opening manager, said the original pizza crust was vegetarian; it contained milk.

“We tasted it without, and realized it was just as good either way,” she says. “There was nothing to be gained from making it the more expensive way, so we ditched the milk and advertised vegan pizza. Back then, there were a lot of vegetarians, but very few vegans.”

A year later, the Deep Fork Group opened The Wedge Pizzeria’s Deep Deuce location, this time with a plan to reach the growing vegan crowd. The urban core has the highest concentration of vegans and vegetarians, so restaurants that cater to the demographic tend to group inside the core.

“We developed a cashew cheese for Deep Deuce,” Farrar says. “For the first year at Western, we’d simply gone with no cheese, but we wanted to target the vegan crowd with more interesting options.”

Farrar is an omnivore, but she appreciates good plant-based cuisine, which is why roughly three quarters of the menu she oversees at Elemental Coffee, 815 N. Hudson Ave., is vegetarian or vegan, down to her grab ‘n’ go options on weekday mornings. One of the logistical issues with true vegan food is that it requires separate prep areas, and that can be problematic in small, space-challenged eateries. Elemental has plenty of space, thanks to a large storage area, but not every restaurant can pull it off.

Vast, the top-of-the-city restaurant atop the Devon Tower, has one of the largest kitchens in the state, and it switched from a vegan-focused week monthly to a vegan tasting menu this year, but not because of space issues. Chef Kurt Fleischfresser said that the tasting menu makes more sense because it leads to less waste; items aren’t prepped and then not used with the tasting-menu system.

Conventional restaurants like Vast that do thoughtful, intentional vegan cuisine will often find themselves the happy recipients of more guests than just the vegan diners. Fleischfresser said one vegan guest will often bring 2-3 omnivores, a party that wouldn’t land at a restaurant without vegan or vegetarian options. The plant-based dining crowd has been making this point for years. Some concepts, like The Collective, are listening.

Strange as it sounds, you can find Chef Beth Ann Lyon’s beautiful, thoughtful vegetarian fare right next to a stand offering a vegan fried taco at The Collective. This is the genius of a food hall: choices for nearly every appetite and dietary restriction with common seating and shared bars. New, more traditional restaurants are including the options, too, though.

The Hamilton Supperette & Lounge in Northpark Mall has only seven entrée options, and the Portobello Rockefeller—a vegetarian dish that can easily be converted to vegan—is one of them. Mexican Radio opened in Plaza District with vegan and vegetarian options, including the Potato Crunch Wrap, a dish that long-time vegetarian Emily Russell calls one of the best vegetarian dishes in Oklahoma City.

“My husband is pretty much a carnivore, and he loves it, too,” Russell says. “I like vegetarian food when it’s obvious the chef has put thought into it, and not just slapped an Impossible Burger on the menu. Good Egg does that well at Mexican Radio and Cheever’s.”

Russell has been a vegetarian since she was 16 years old. Now, on the cusp of turning 28, she’s working as a full-time writer and running OKCVeggie.com in her spare time. The blog tends to focus on cooking vegetarian, but her Twitter feed also highlights great places to eat vegetarian around town, places that would surprise most locals, like Tandoor inside the Checker’s truck stop at the corner of East Reno Ave. and Martin Luther King Blvd.

“When I started eating vegetarian, it was really hard to find places to eat out in the metro,” Russell says. “Now, it’s easy to eat vegetarian all over town. We have so many good, thoughtful options on menus.”

Eating vegan is another matter. While Picasso Cafe in the Paseo Arts District and The Red Cup (Uptown) have faithfully served vegans for many years—along with The Wedge Pizzeria and Elemental Coffee—finding vegan on menus has been more challenging than vegetarian. Chef Emma Ryan hopes to add to the options with her new Midtown restaurant, Plant. Everything that can reasonably be made in-house is, and early indications are that she’s going to be very busy, serving up healthy vegan options that emphasize the ingredients, like pesto, miso, quinoa, and fresh vegetables, while avoiding the trap of making vegan “chicken-fried steak” or mushy veggie burgers with the consistency of clumpy pudding.

Plant also makes ice cream in-house, and while the consistency isn’t the same as traditional offerings, it is smooth and creamy. In fact, if customers blind tasted it against traditional frozen desserts, it’s likely they would have a hard time distinguishing, and they probably wouldn’t care anyway, as Ryan’s recipes are delicious. That seems to be the key to the ongoing growth of plant-based cuisine: make it delicious, make it fresh, let the vegetables, grains, fruits, etc., speak for themselves, and people who love good food will make it part of their rotation.