Welcome to the West - 405 Magazine 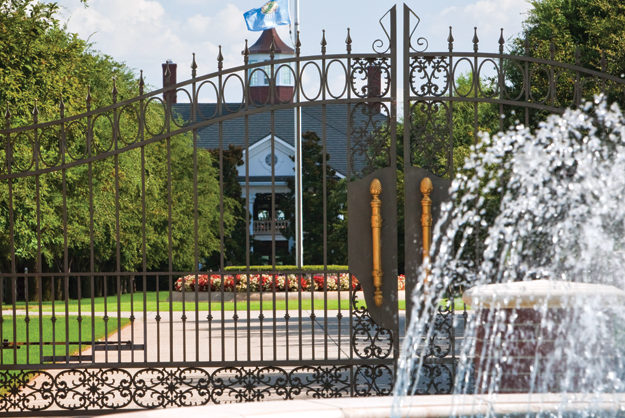 Driving through the large double gates, you almost expect to hear the theme from “Dallas” wafting through the trees. But this is Express Ranch, not Southfork. And owner Bob Funk is about a million light years away from the crafty and fictional J.R. Ewing.

Sitting on a hill overlooking 6,000 acres between Oklahoma City and Yukon, the Express Ranch has become one of the top working ranches in the United States.

“I have been in the cattle business 20 years,” Bob says, “and we are now the largest pure-bred Angus breeder in the United States, maybe the world.”

Funk lives in the sprawling but elegant home with Janine Regier. They have been together three years and have built a life mixed with horses and ranching, as well as traveling, entertaining and philanthropy.

Funk grew up on a dairy farm in Duvall, Washington, often working from 6am until well after 11 o’clock at night, he says. That instilled in him a drive and determination to succeed. He excelled in athletics in college, and after completing a master’s degree, he began working for a personnel company.

“They transferred me to Oklahoma in the early 1970s, which was the best favor of my life,” Bob says.

While he still had farming and ranching in his blood, Funk knew he had a knack for helping people. That knack led him to open his own staffing agency.

“In the early ’80s, Oklahoma was in the middle of the oil bust,” he says. “I tried to find capital with the three big banks in downtown Oklahoma City, but they, of course, were retreating. I live by a couple of axioms: ‘Where there’s a will there’s a way,’ and ‘through adversity also comes opportunity.’ So I found a little bank in Piedmont that loaned me $150,000, and I was determined to keep those employees that I had.”

Not only did Funk keep those employees, his company flourished. Today, Express Employment Professionals is headquartered in Oklahoma City and has doubled in size with offices throughout the United States. Funk holds the distinct titles of Founder, Chief Executive Officer and Chairman of the Board. The bank that originally lent him $150,000 was Farmers and Merchants in Piedmont, an institution with which he still does business today.

The success of his personnel agency helped prepare Funk for the next phase of his life: returning to his country roots.

“I bought this farm about 20 years ago, and we developed the cattle side of the operation first,” he says. “Some folks were making remarks that I would be out of the cattle business in a few years, so I decided to put a big ol’ house right on top of the hill,” he adds with a grin.

And a spectacular house it is.

“This house is so much fun,” Janine said. “Decorating it is an ongoing process. We could probably never buy another thing and move things around and it would look new and fresh all the time.

“It’s a full-time job decorating it,” she adds. “We travel a lot, and when we are home I would prefer to be outside with the horses, but I do like to decorate. It’s just a beautiful house.”

“Janine has done a fantastic job of putting up pictures of my family on the wall,” Bob says proudly. “She found some of my old memorabilia from when I was a kid and she has put that in shadow boxes. I have many photos of my grandkids and she’s put those on the wall.”

A magnificent double staircase is the first thing you notice when you walk in the front hall. Then comes room after room filled with incredible artwork, priceless antiques and memorabilia from a lifetime of collecting. Books and paintings, crystal and elegant overstuffed furniture offer welcoming touches. It’s easy to picture yourself nestled into one of the many nooks, reading one of the fine pieces of literature on a crisp autumn day.
Among his most prized possessions is a collection of Western artwork, reflecting Funk’s appreciation for all things cowboy.

“Cattle people have a high level of integrity in business. I think we have sold about $150 million  worth of cattle and our total accounts receivable that we’ve lost was around $300,000. This is done without contracts; they just come to the sale, they give us their name, they bid on them, they take the cattle home and you just have to trust that they’ll pay you, and they always do. Their integrity level is extremely high.”

The country lifestyle is one thing Bob and Janine have  in common.

“I grew up in Marlow, Oklahoma,” Janine says, “so I was always around horses and cattle. In fact, I was FFA Sweetheart in high school,” she laughs. “I don’t think they even have the ‘sweethearts’ anymore, but back then I was proud to wear that title.”

Bob says he met Janine through a mutual friend.

“I was looking for a hairstylist because mine had retired, so I was referred to Janine, and she did a great job. She was also a masseuse, but it took me a couple of years to get up enough nerve to do the massage,” he says sheepishly.

Does she still cut his hair?

Reflecting on a life well-lived, Bob says keeping your eyes focused on what’s ahead and not what’s behind will take you through the rough spots.

“The thrill of life is to help someone else,” he says. “It’s not what we gain out of it, but what you get out of helping others achieve their own success. I’ve never been a quitter. I always look forward to the next day, the next year – the next decade.”

“I’ve never been around anybody who has wanted other people to succeed, I mean truly honestly succeed,” Janine adds. “Here I go, getting emotional, but he’s so amazing in that he’s always willing to help people succeed and build the life they want. He is always pumped for life and for other people, and has great ideas for things he wants to do every day. Life with Bob is an adventure, and I personally feel very lucky and very blessed.”

As Janine wipes tears from her eyes, Bob gets philosophical as well.

“There’s a principle I would like to communicate. My belief is that things and acquisitions in life are not that important. Relationships with people will last a lot longer than the latest car, the latest purchase, the big house, the big ranch or whatever it might be. In the scheme of life those things are not that important, and you will realize this the older you get. Relationships mean more to me than anything.

“What kind of heart you have is what makes you successful,” Bob says. “If you have a place to live and you have enough food to eat I would say you’re very blessed.”

At a Glance: Robert A. Funk

» Express Employment Professionals is one of the top staffing agencies in the world, with more than 560 offices in the United States, Canada and South Africa.

» Express Ranches are the second-largest seed stock producers in the U.S., maintaining 165,000 acres of land at six locations in Oklahoma, New Mexico and South Dakota.

» A genetic program consisting of semen and embryo sales makes up a large part of Express Ranches.

» Funk serves as chairman of the board of directors for the National Cowboy and Western Heritage Museum in Oklahoma City.

» Past chairman of the Oklahoma Youth Expo

» Oklahoma Baptist University board of trustees, member and former chairman

» Board member for the Oklahoma Independent College Foundation