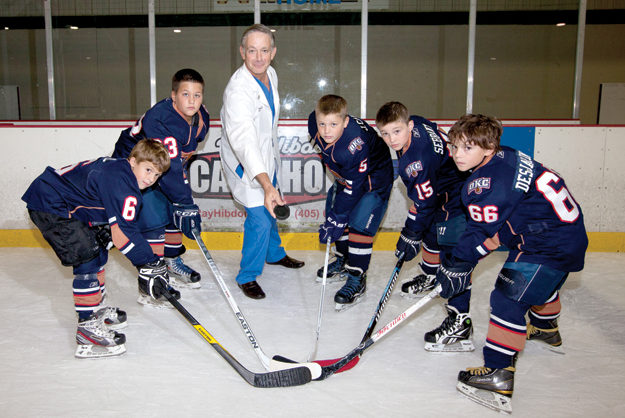 Coincidences happen every day, but when they’re big enough and improbable enough, and represent something wonderful enough, they start to border on… miraculous. And this one’s even on ice.

In the course of a casual conversation during their sons’ hockey practice, two neighbors found that their sons were born a mere 30 minutes apart, and when one mentioned it to Dr. Eli Reshef, a reproductive specialist at INTEGRIS Baptist Medical Center and medical director of Bennett Fertility Institute, he quickly discovered an unintended – and amazing – legacy in the form of a team he unknowingly helped create. Dominic Desjardins, 10; twins Brendon and Jackson Carter, 10; and Trey Bowers, 9, all play on the Oklahoma City Oil Kings along with Mason Sebrant, 10 (who coincidentally was delivered by Dr. Reshef’s partner Dr. David Kallenberger) and Will Brenner, 9.

“Wow, this is quite an awe-inspiring story,” says Reshef. “I help couples conceive; that’s my specialty. Individual success stories are wonderful to begin with. But almost an entire ice hockey team? Now that’s an amazing first for me!”

Stephanie and Gary Desjardins’ son Dominic was conceived after infertility treatment with Dr. Reshef; he now has two younger brothers who were conceived spontaneously. After years of trying, Susan and Steve Carter were referred to Dr. Reshef, and their twins Brendon and Jackson were conceived by in vitro fertilization (IVF). Trey Bowers was also born with the help of IVF performed by Dr. Reshef and was delivered by Dr. Kallenberger. All the kids are now healthy and active, and they and their parents have grown fiercely devoted to hockey. Many children, including the Carter twins, are introduced to the sport through a program run by former NHL player and OKC Blazers coach Mike McEwen called “Kids First,” which allows newcomers to have full uniform and equipment (rather expensive otherwise) and train extensively, and those who decide hockey isn’t for them do not have to bear the expense of the uniform and equipment.

These ice hockey moms hope that the public will recognize the tremendous joy and fulfillment that modern fertility treatments, including IVF, bring to childless couples. “What Dr. Reshef does is truly special… he helped create our families as they are today. We don’t forget that,” says Ms. Desjardins.

“When I stepped into the rink with the kids,” says Dr. Reshef, “I was struck by their endless energy and enthusiasm for the ice. Only then did the magnitude of this special occasion hit me: these kids are here thanks to modern medical technology and I was fortunate enough to help their parents achieve this miracle. Amazing!”