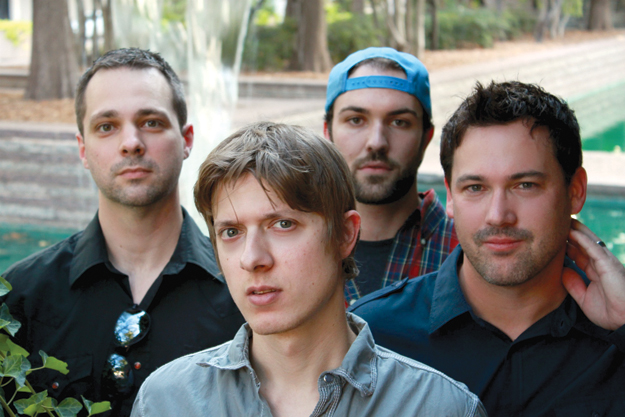 Trying to predict what OKC quartet Lemma is going to play next is an exercise in futility: they’re constantly, confidently bouncing from country to jazz to British pop and back in a ceaseless attempt to engage listeners of all sonic stripes. But why try? It can be taken as an assumption that their August 19 appearance in the Arts Council of OKC’s Twilight Concert Series will rock.

Also, if you’re a fan of alt-country or awesomeness in general, The Old 97s are celebrating the 15th anniversary of their spectacular “Too Far to Care” by launching a tour in August to perform the album live in its entirety, plus some other songs they like. The itinerary doesn’t bring them to OKC, (booo!) but they put on a killer live show and Dallas (Aug. 24) isn’t that far…

New Kids Back on the Block

An old space on Film Row is about to get a new face thanks to The Paramount OKC. Located in the venerable Paramount Pictures Building at 701 W. Sheridan (just a few steps from the Slice House), the spot will sell locally sourced fruit, cheese, coffee, wine and baked treats, all enjoyable while watching movies in the vintage 50-seat Paramount Screening Room. Its grand opening weekend is August 10-11; stop by and see the show.

he OKC Thunder had every reason to be upset: after a smashing season and run through the playoffs, they lost four games in a row against the Heat. Lost the Finals. Lost the NBA championship. They returned home to Oklahoma City empty-handed – but not to an empty airport. Over 4,000 fans were waiting to welcome them back and prove that Thunder support isn’t a fair-weather phenomenon. Wait ’til next year!

File this under “High Praise Indeed” – Oklahoma artist Michael Collins was offered an opportunity last year to paint a portrait (from supplied photos) of one of her Majesty Queen Elizabeth II’s favorite hunting dogs. The result was approved by her staff, and he was invited earlier this year to present the painting in person, so Collins flew to England and met with the monarch in the den of her country estate, Sandringham. It was a virtually unprecedented invitation into her private sanctum; fortunately, HRH recognized her pet immediately, professed herself delighted with the result and spent over 20 minutes discussing dogs and horses with Collins. A day to remember, eh what?

Nothing ever ends. Big or small, causes (which were themselves effects of other causes) have effects that lead to effects of their own. Just ask the Lakota Sioux, whose victory against General Custer in response to systematic U.S. incursion spurred a fresh onslaught of American troops, which drove the natives off the plains, which paved the way for railroad expansion, which brought hunters to wipe out the buffalo, which encouraged cattlemen to move to the wide-open spaces and form a new culture of their own… historian Paul Hedren examines the stated goals and unexpected consequences of Western expansion in After Custer: Loss and Transformation in Sioux Country, published by OU Press and winner of the National Cowboy and Western Heritage Museum’s 2012 Western Heritage Award for Outstanding Nonfiction Book.

On a smaller scale, though many suicidal people seek an ending to their current situations, life continues for others around them. Tulsan Becky Kruse responded to her son’s death by trying to help other families see warning signs in their loved ones and act to prevent them from harming themselves – her deeply personal epistolary narrative Note to Adam chronicles her own recovery in progress and aims to increase awareness, hopefully keeping more people from sharing similar grief.

What do you do after winning two gold medals in your sport’s highest competition? Try to do it again. UCO resident athlete Jeremy Campbell is heading back to the Paralympic Games to defend his title as the reigning world champion in men’s discus in the London event August 29-September 9. “It has been a long four years, and I’ve learned a lot while growing with this sport,” he said. “Now, I know what to expect at the Games this time around.” That’s a disquieting thought for his fellow contestants…

No complaining. No gossiping. No lying. That’s the tripartite foundation of CEO and author Tom Pace’s 3PointCommitment, and in addition to the generally brighter outlook on life that comes with it, there might be material rewards as well for people who manage to uphold the commitment for 10 consecutive days: Pace will award $10,000 to one entrant on September 7. To read more, sign up for the challenge or buy a wristband to help keep track of your streak, visit 3pointcommitment.org.

A firsthand look at ancient wonders hidden for millennia? They can dig it. Fifteen students, three alumni and two faculty members from Edmond’s Herbert W. Armstrong College (its largest volunteer group yet) will travel to Israel this fall to join prominent archeologist Dr. Eilat Mazar of Hebrew University in her ongoing excavation of a 10th century B.C. palace – an archaeological excavation at a Jerusalem complex believed to belong to the biblical King Solomon over 3,000 years ago. Previous Mazar finds dating to biblical times form an interactive exhibit titled “Seals of Jeremiah’s Captors Discovered,” available for viewing free in the Armstrong Auditorium lobby until January 16, 2013. For more information on the Israel dig or the exhibit, visit armstrongauditorium.org or call 285.1010.

Combating hunger is a marathon, not a sprint. From 11am July 21 to 12:25am July 22, patrons reveled in gastronomic wonders and hand-selected wines from local chef Kurt Fleischfresser in The Tasting Room at Will Rogers Theater; funds piled up for the Regional Food Bank; and the chef and his team continued to cook non-stop for nearly 14 hours. The secret ingredient in the Culinaire for a Cause fundraiser was commitment.