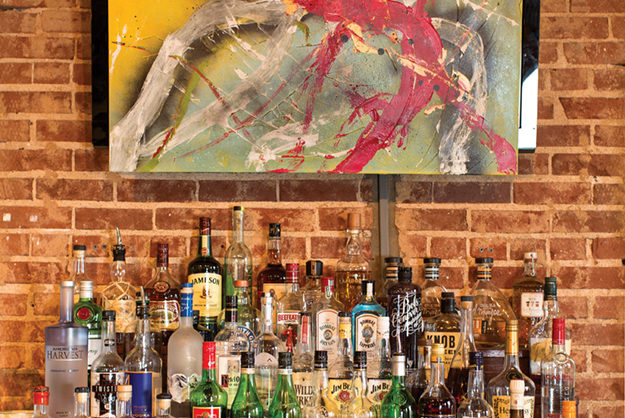 It's a New Year; an opportunity to take advantage of the clean slate offered by the pristine calendar page. While you can kick off your 2014 anywhere, one recent addition to the Norman dining scene deserves special attention, and not just because of the linguistic coincidence. For an expertly designed menu of American classics and cocktails, you’d be well advised to start from Scratch.

Scratch Kitchen & Cocktails (in the former home of Native Roots Market) keeps its space’s raw aesthetic of brick and wood and concrete, so that depending on the crowd level it can be by turns a boisterous bar hangout and an intimate venue for couples dining by candlelight. That decorative choice also keeps visitors’ attention focused mainly on the food, or the bar, or each other – all of which are worthy targets. The menu in particular stands out right from the beginning: Smoked salmon cups set off their salty slivers of protein with avocado and cream cheese, all layered into a crisp pastry shell with tasty results – but their height and their composition make taking a bite neatly a bit of an awkward prospect. Those unwilling to risk getting a dollop of cilantro coulis on the tips of their noses might instead consider the sweet potato gnocchi in spicy tomato sauce, or the rich earthiness of the quinoa crab cakes.

Some of the cuisine is impressively haute – consider the duck confit. It’s an entrée featuring a duck leg slowly cooked in its own fat, making it supremely rich and savory and unbelievably tender. You won’t find it many places; Scratch does it, and lays its version in a seasonally appropriate (and, again, tasty) gastrique of dried cherry, pumpkin and butternut squash.

It’s a marvelously executed dish, but it’s the sort of recipe that carries a certain level of expectation; if a chef attempts it at all, he’s going to try to bring his A game. What’s perhaps more impressive is that Scratch brings the same level of ambition to less gastronomically famed fare as well.

Take, for example, the BLT. One of the most ubiquitous sandwiches in the world, so universally known that it only takes three letters to name. You can get one practically anywhere – but where else is the bacon so thickly sliced and stacked (and pepper-crusted), the tomato delivered in the form of a thick spread of apple brandy-tomato relish and the whole thing set off with a sweet, tangy honey-lemon aioli? The Scratch version is a crunchy, flavorful marvel that improves the form of what could have been a mundane order.

That’s basically the restaurant in a nutshell – when it aims high, it hits; when it aims lower, it elevates through design and execution. A simple but cozy space, a menu filled with inspiration and careful thought, a well-tended bar. Apart from the noise level from time to time, what’s not to love? A new beginning, at least culinarily, is perpetually at hand and accessible anytime … and as often as you like. For the record, fresh starts are delicious.

Branch out. The bar is stocked with quality labels, but you can get a bourbon on the rocks anywhere; one of Scratch’s specialties is whipping up deliciously complex craft cocktails. Try the Dark & Stormy (which has rum, ginger beer, lime and specially made bitters), a deftly executed Mint Julep or The First Collaboration (which contains – not kidding – elderflower liqueur).

Look for familiar faces. The most noticeable element of the decorative scheme is the collective gaze of a vast crowd; the portraiture of Norman photographer Keisha Register as part of her Wallpaper Project. Many of the hundreds of subjects are Norman residents, so take a quick tour and see if you can find anyone you know.